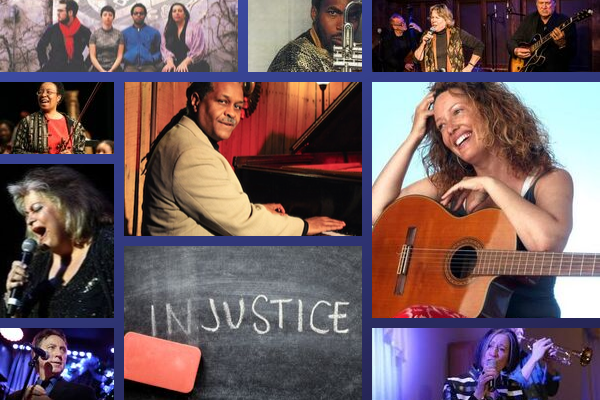 Hold your breath, Philly. October’s going to be unusually hectic on the jazz front; anyone with even a passing interest in the music should find plenty to pack their calendars, and diehards may want to brace themselves. (If you see me dashing from one show to the next, just toss a water bottle in my direction. It’s the closest to a marathon I’ll likely ever get.)

The centerpiece of the month’s festivities comes via Ars Nova Workshop’s October Revolution of Jazz & Contemporary Music. The festival’s first two iterations offered packed weekends of music at the outset of the month; in its third edition the concerts sprawl out over the entire month, with an incredibly strong lineup. It all starts with the month itself: celebrating the 50th anniversary of the Art Ensemble of Chicago this year, Roscoe Mitchell assembled an expanded and reimagined incarnation of the pioneering group that included Philly poet/experimental musician Moor Mother (one of her verses gave the Art Ensemble’s latest album, We Are on the Edge, its name). The two reconnect to open the fest Tuesday at the Ruba Club. The whole thing closes on Halloween night with a second reunion of Philly’s own Sounds of Liberation, this time with tenor titan David Murray guesting; more excitingly the band will then reconfigure as the Creative Arts Ensemble to reprise, for the first time since its 1972 release, founder Khan Jamal’s Drum Dance to the Motherland.

In between there’s a remarkable array of performances, including artists who haven’t played in the city for decades (Fred Frith, Patty Waters), a 50th anniversary tribute to Miles Davis’ landmark album In a Silent Way led by drummer Charlie Hall of The War on Drugs; and a monumental meeting of percussionist Adam Rudolph’s Go: Organic Orchestra with the adventurous Indian classical musicians of Brooklyn Raga Massive, among a host of other events. [INFO]

Ars Nova’s festival borrows its name from Bill Dixon’s original October Revolution back in 1964. One of Dixon’s frequent collaborators and fellow faculty at Bennington College will also be bringing the late trumpeter’s spirit to Philly when trumpeter Arthur Brooks brings his Ensemble V to The Rotunda on Oct. 24 for a Fire Museum-presented show. Brooks remains fairly obscure even in the obscurity-shrouded annals of avant-garde jazz, but he rubbed shoulders with many of the music’s greatest figures, including Cecil Taylor, Sonny Sharrock and Frank Wright. While Ensemble V was founded in the early 70s at Bennington, the line-up has remained amorphous over the ensuing decades. This version includes bassists Jeremy Harlos and Anthony Santor, trumpeter Bill Heminway, and percussionist Matt Weston. [INFO]

South is doing its part this month to fill in any dates left over from Ars Nova’s calendar-packing. The weekend of Oct. 11-12 will feature a rare intimate performance by the Bob James Trio, led by the oft-sampled keyboardist also famous outside of jazz circles for his theme from Taxi. That Sunday, the 13th, the great and unpredictable clarinetist Don Byron will lead his quartet. Oct. 18-19 will feature the expansive trumpeter Dave Douglas and his Devotion Trio with drummer Kate Gentile and Philly-born pianist Uri Caine, with the weekend rounded out by the stellar elegance of the Bill Charlap Trio. A very different piano trio takes over on Oct. 22-23, with the return of The Bad Plus with Philly’s Orrin Evans on piano. Two local favorites are also on the bill this month, with recent CMA grantee Sumi Tonooka on Oct. 10 and guitar legend Jimmy Bruno on Oct. 27. [INFO]

@exuberance ushers in the month on the more subtle end, with one of the current generation’s most thrilling pianists. Sullivan Fortner provides ample evidence, if any is still needed, that fresh ideas abound in traditional forms. Whether playing duet with the equally reinventive Cécile McLorin Salvant or playing with jazz giants or contemporary peers, his approach to the keyboard is one of constant discovery, which makes the Kensington listening room an absolutely ideal space in which to listen raptly. [INFO]

Jazz Bridge is also busy presenting shows all over the city, but at its heart it remains a charitable organization, dedicated to helping musicians at times of medical or legal crisis. With a new series launching this month at Sherrie Maricle’s stunning space Drummers, the scope of its mission widens a bit to take in a wide range of social justice issues. The Dreambox Concerts, planned to run every second Wednesday through next May, pairs performers with local organizations working on a specific issue highlighted by the performance. The opening concert on Oct. 9 will feature pianist Aaron Graves and address the issue of gun violence with help from CeaseFirePA and Barbara Montgomery, past president of the PA chapter of the Million Mom March. [INFO]

Mentorship has always been a key element in the jazz tradition, with Art Blakey’s Jazz Messengers and its succeeding generations of rising stars being the prime exemplar. Pianist Marcus Roberts was never a Messenger, though he came of age alongside many Young Lions who were – most notably Wynton Marsalis, in whose 1980s band Roberts made his name. The trumpeter’s drummer brother Jason has been a longstanding member of Roberts’ acclaimed trio, along with bassist Rodney Jordan. The three have now taken on the role of mentors themselves, founding the Modern Jazz Generation to take younger players under their collective wings. The band will launch the jazz season at the Kimmel Center on Oct. 11. [INFO] Later in the month comes another cross-generational band, albeit one made up entirely of masters: the stellar trio of Chick Corea, Christian McBride and Brian Blade celebrates its new double album in Verizon Hall on Oct. 27. [INFO]

Over at the Annenberg Center, the jazz season kicks off on Oct. 12 with a (relatively) more subdued performance by usually pyrotechnic pianist Hiromi. After the release of her 2009 solo debut Place To Be, she decided to revisit the format once a decade, creating an aural album of her growth without the dazzling punch of her bandmates. She’ll take the Annenberg all by her lonesome to celebrate the release of Spectrum, the second snapshot in the series, recorded on the eve of her 40th birthday. [INFO]