City Of Bliss & Love: An oral history of ambient and experimental electronic music in Philadelphia - WXPN 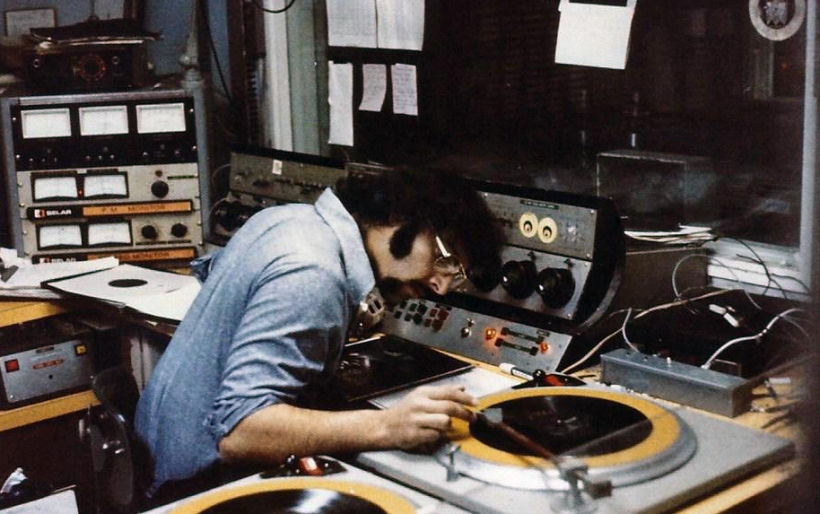 City Of Bliss & Love: An oral history of ambient and experimental electronic music in Philadelphia

In the summer of 1973, Brian Eno — keyboardist for progressive British art-pop outfit Roxy Music — would take his cache of synthesizers and tape machines and embark on a solo career that would eventually carve a path for a bold new type of machine music.

Although Eno’s 1978 masterwork Music For Airports is commonly pointed to as the origin of ambient music, the genre’s historical and aesthetic DNA stretches back through prog-rock, 60s psychedelic rock, Germany’s Krautrock movement as well as the contemporary classical innovations of composers like John Cage and Karlheinz Stockhausen in the decades immediately following the second World War. Eno coined the term “ambient music” in the Music For Airports liner notes, but earlier works like Tangerine Dream’s 1970 debut Electronic Meditation and Kraftwerk’s 1973 composition “Heimatklänge” laid down the genre’s lush, tranquil sonic makeup while pointing toward the music’s future directions.

By the mid 1970s in Philadelphia (as with major cities and small towns across the nation alike), a generation raised on the music of the 60s would tune in to bear first-hand witness to the rise and fall of psychedelia, the emergence of progressive rock and all of the daring, electronics-based permutations that followed.

In the four decades since ambient electronic music (and the related prog-rock sub-genre “Space Music”) began to blossom stateside and globally, the city of Philadelphia’s airwaves and music venues have been filled with forward-thinking musicians seeking to push the to the outer limits of sound. We spoke with a range of musicians, radio broadcasters, DJs, synthesists and organizers across generations to take an in-depth look into the history of Ambient music in Philadelphia.

It was probably psychedelic music in the late 60s. Pink Floyd, this group Silver Apples, which was probably the first electronic pop group. Things like that got me into that kind of electronic mindset. That evolved into progressive rock, keyboard oriented artists like Emerson Lake & Palmer, Genesis, YES and King Crimson. And that evolved into the space music aspect of electronic music: Tangerine Dream, Klaus Shultze, Kraftwerk, Vangelis, Jean Michel Jarre…and I was just totally seduced by that sound.

In 1966 or so, electronic elements in rock music took me to (Los Angeles experimental rock outfit) United States of America, Lothar and the Hand People, Steve Reich, Philip Glass et al. I also discovered the experimental programming at WXPN which was an amazing asset for listeners.

In the late 1970s, I was way into progressive rock, but not yet open-minded enough to understand the virtues of space music. I had come across works like (Jean-Michel Jarre’s) “Oxygene” and (Kraftwerk’s) “Autobahn”, but I was really looking for an instrumental version of prog. And then I heard “Stardancer” by Klaus Schulze. It’s not really one of his space music pieces, but it really hit me hard. The motorik drumming, the swirling effects and dramatic chord changes, all expanding beneath a full-throated synth lead, only to echo out in a concluding cold drop – it was just stunning.

After hearing this I vowed to learn more about where this music came from, who was making it, and how it was made. This moment really put me on an entirely new path into the Berlin-School. It’s when I began listening to DIASPAR and Star’s End with more enthusiasm – and eventually in 1980 I become a WXPN staff member and host of both programs.

As the 1970s gave way to the 80s, FM Radio in Philadelphia was providing a platform for a distinctive brand of progressive electronic music. Shows like Diliberto’s Echoes and Star’s End were saturating local airwaves with a wild, free-form approach to radio. freeform For many young, adventurous listeners, FM radio would provide a landscape for the exploration of exciting new musical frontiers while live events highlighting experimental electronic acts were happening all over the city.

In college I was working at XPN, so I had a ton of people around me who were into that kind of music. There was the radio show DIASPAR that was on five nights a week, four to five hours a day. I created Star’s End in ’75. In Philadelphia, it was a small hotbed of electronic music, especially in the 1970s. There were a lot of local artists Charles Cohen (local ambient music pioneer and synthesist) who played in a group called The Ghostwriters. There was an electronic trio out of Camden called The Nightcrawlers. It was a very vibrant, very specific kind of community.

On the Mosaic show, we created this thing called The Spontaneous Space Music Ensemble. We would get all the studios wired together, we had some people who could play an instrument, some people just banging on things and we would go for HOURS. We’d have the studio feeding into each other and tape loops going.

Presently, WXPN is professionally staffed, but in 1980, and for some years prior and after, it was a community run, all-volunteer public radio station. I got on the air doing Star’s End in 1980 through their annual outreach, which offered listeners the opportunity to get involved in hosting music shows, producing news and public affairs programming, and many other aspects of running a University/community radio station.

Chuck Van Zyl was my hero, man. Saved my life many times in high school! That show is an institution and is Hall of Fame worthy for Philadelphia and now globally. It shaped most of what I listened to in high school post goth. Echoes as well, but it is Star’s End that shifted the paradigm.

The live scene was pretty active. The Painted Bride used to have some of these shows, people like [80s synth-pop ensemble] WOZ would play there. XPN sponsored a series of concerts called The Oscillation Zone and they were at different venues. Philadelphia electronic musicians like Darren Kearns, Dave Lunt, people like that. There was a series called F.O.P.P.E.M. [Festival of Performing Philadelphia Electronic Musicians] that Charles Cohen curated. XPN would put on gigs all the time, with groups like [Ruffhouse Records founder] Chris Schwartz’s and Jeff Coulter’s band Tangent.

By the dawn of the 90s, the older generation of innovators had established Philadelphia as a breeding ground for forward-thinking electronic music. Globally, electronic music had reached popular, critical mass behind a wave of commercial hits by crossover acts like The Prodigy, Chemical Brothers and others. In contrast to this, Philly was nurturing a unique underground scene which had blossomed into a multitude of interrelated subgenres by the end of the decade.

On any given night in the city, adventurous listeners could be met with a variety of sounds ranging from IDM, ambient, modular synth music, glitchy laptop beats, minimal techno, trip-hop and beyond. Events like Van Zyl’s The Gatherings, Hologram at LaTazza, Milkweed, DJ Crasta and Julian Grefe [Pink Skull/EDK] at Grass, Erin Anderson’s Fidget or John Schenk’s fusion of DJing with live improvisation with Slipping Into Sublimity at the 700 Club in Northern Liberties.

Much like their forebears in the 80s, Philly’s new electronic vanguard went about releasing their music independently. Listeners could hit up spots like 611 Records or Spaceboy Music on South Street to pick up releases from labels like Sean O’ Neal’s Fuzzybox and Rob Mall’s tbtmo. If you had a dial-up internet connection and an interest in discovering all of this new music, you might even find your way to the message boards on Aharon N. Varady’s Philadelphia Ambient Music Consortium site to discuss music or get info on upcoming events.

I didn’t know it at the time, but on May 9th, 1992, I founded The Gatherings Concert Series. Throughout the 1980s, Philadelphia had seen the rise of a significant space music scene. Known acts like The Nightcrawlers, Tangent, Darren Kearns, The Ghostwriters, Stephan Spera, Xisle and others, in conjunction with a few venues which hosted innovative music concerts, brought a great deal of creative activity to the Philadelphia area. For various reasons, by the early 1990s just about all of this energy had dissipated.

I worked at 611 Records and combined the indie rock mentality with the techno mentality. It was quite a crossover to bear. And the merger ended up spawning a passion for ambient and IDM. Also about the Philly ambient scene, I have been inspired by my friend Aharon [aka DJ Spaceling] when it comes to ambient music. He had a radio show on Drexel’s WKDU 91.7 FM. John Schenk is also a notable ambient DJ in Philly. He was doing it in Philly for years before I first entered the very this “ambient scene.”

Slipping Into Sublimity started out as a trio, DJ with two turntables and two Korg MS 20s, space echo, Frippertronic guitar, and violin. We were mixing dance and experimental improv with downtempo trip-hop. We added sitar and another synthesizer player and finally another lead guitarist plus guests!! It got ridiculous: Gloria Justen on violin, Ben Morgan on Sitar, Yanni Papadopolous on guitar, Schwa Exp on guitar, and Jesse Buehler on electronics.

I remember giving a mix of my ambient music to the bass player in our band, who was our writing partner, and he told me “man, I don’t know. It’s too mellow, we’re going to put people to sleep” and I was like “Yes! That’s what I want to do!” The Rotunda was my first show. I played at this Space Rock festival. The Mikronesia setup then is pretty much what it is now. A laptop with samples, a synth — still my Nord Lead 2 from the late 90s — some outboard FX. Always improvised.

In retrospect, it was a pretty incredible time. It was before the internet, so everything was very personal in terms of networking and promoting. I was into this very particular niche music within the overall umbrella of electronic music — it was generally considered ambient/experimental at the time — so there was a tight community of people who were into the music and we all knew each other.

I worked at two of the record stores on 4th and south — first 611, and then Cue — and they were part of this amazing hub of activity. [Club] Fluid and the Latest Dish were just perfect additions and there was a rare sort of synergy happening on that block. The number of people in the scene was relatively small compared to today, so it was pretty close knit and that was great. And it really did create an amazing sense of community that I don’t think I’ve experienced since.

The sound of ambient music and experimental electronica has lived on over the airwaves and in the city’s live music venues. Events like Gate To Moonbase Alpha and Event Horizon have carried on Philly’s peculiar sonic tradition throughout the 2000s, playing host to some of the finest electronic musicians on Earth. Star’s End, Echoes and Van Zyl’s Gatherings are still going strong while younger musicians like madam data, Hallowed Bells, Radere, Ahza Azha, and others continue to push the boundaries of our city’s collective musical imagination.

Special thanks and shoutouts to everyone who helped out with this piece and all of the folks I didn’t get a chance to speak with who’ve contributed to beautifying the sound of our city. Gina Renzi, Scott Cole, Gino Wong, Michael Hopkins, Chaka Benson, Chaperone, Aharon N. Vardy and more.