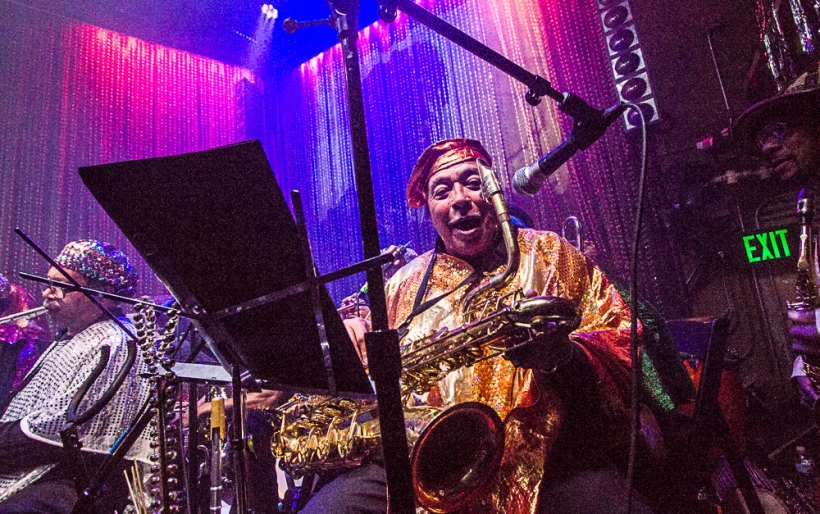 On Thursday, March 12th, Philadelphia jazz veteran Danny Ray Thompson passed away at the age of 73 years old. Thompson was born in New York City in 1947 and briefly attended the Juilliard School for Music. Proficient at baritone saxophone, flute and bassoon, Thompson got his start in 1966 playing with pioneering Nigerian drummer Babatunde Olatunji. In 1967, Thompson first encountered Sun Ra and his Arkestra at a John Coltrane concert. Upon joining the Arkestra, Thompson and the Arkestra would move to Philly the following year.

Upon settling in Philadelphia, Thompson would take up residence with Sun Ra and the Arkestra at a home gifted to the band by trumpeter Marshall Allen’s father on Morton street in the city’s Germantown area. Driven by a desire to connect with the Germantown community and spread Sun Ra’s visionary philosophy, Thomspon founded the Pharoah’s Den grocery store on Heiskell Street in East Germantown. In Robert Mugges’ classic 1980 documentary on the Arkestra’s time in Philly, A Joyful Noise, Thompson is seen manning the store and as a swarm of neighborhood kids bustling at the counter. In this scene, he explains that a part of the store’s purpose was to have a space in the community where he could impart Sun Ra’s philosophy and ethical principles onto the neighborhood’s youth: “The store was started because I felt something needed to be done in the neighborhood for the ones who will listen, the young ones who will listen. Right over there you see I got a sign that says ‘space is the place,’ so I try to teach the children about space, outer space.”

Once they arrived in Philly, Sun Ra and his Arkestra connected with Philly’s creative community, musicians and visual artists alike, to help spread Sun Ra’s message. One Philly resident that found his way into Sun Ra’s circle was Leroy Butler, a 94-year old visual artist who also passed away early Saturday morning. A lifelong artist and lover of music, Butler was charged with creating evocative pen and ink designs for classic Sun Ra albums like A Fireside Chat With Lucifer and Sun Ra & His Arkestra Featuring Pharoah Sanders. In an interview with Red Bull Music Academy, Butler described his first meeting with Sun Ra at a practice session at the Arkestra’s house on Morton Street.

“I think somebody took me around the house and they were getting ready to rehearse. They rehearsed on Saturdays. So I say to Sunny, ‘Play a little something for me.’ So he said [hums the 19th-century folk song ‘Shortenin’ Bread’], so he played that and I think John Gilmore picked it up and somebody else picked it up and next thing you know we had a full session… on ‘Shortenin’ Bread!’”

For years both Butler and Thomspon dedicated themselves to Sun Ra’s radical and transcendent philosophy and praxis. While Thomspon toured the world with the Arkestra up until his final days, Butler lived a quiet life in Germantown with his daughter. Both were prime examples of the kind of creativity and discipline that Sun Ra and the city of Philadelphia can inspire in its artists. Rest easy Mr. Butler and Mr. Thompson, we love you and we hope that you get to join Sun Ra and all of your loved ones and ancestors in the next world.