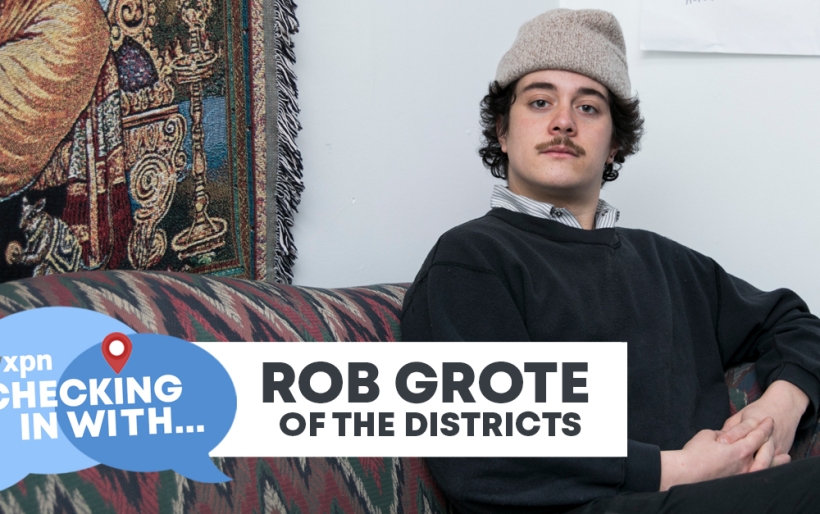 Checking In With… Rob Grote of The Districts

In times of crisis, it’s more important than ever to check in on your friends and loved ones. Here at XPN, we’re Checking In With our extended musical family to see how they’re holding up during the Coronavirus quarantine…and what music has kept them grounded. Today, John Vettese chats with Rob Grote of The Districts.

The last concert I saw before the Coronavirus quarantine took effect was The Districts’ homecoming concert at Union Transfer — the tour finale that wasn’t supposed to be the tour finale.

Last week, I caught up with singer-guitarist Rob Grote on Facebook live for a Checking In chat (and acoustic performance) where he shared the Philly rock band’s experience touring during the pandemic. “It was increasingly crazy as it went on,” he said. “When we were leaving, we were like ‘we’re gonna ring a bunch of hand sanitizer, maybe not mingle too much.’ But it didn’t feel like terrible panic at first.”

The plan had been keep going with the tour behind their new album You Know I’m Not Going Anywhere — “I think we cursed ourselves,” Grote told the Union Transfer crowd, “Since we’re literally not going anywhere now.” — and hit as many places as the band could, trying to make the most of it. But as they got closer to home, particularly the 48 hours leading up to the UT gig, the urgency around COVID-19 went from zero to 100.

“By the time we were playing, we knew it was going to be the last show,” Grote said during our chat. “It felt special because we were celebrating the release of the record but also kind of sad because we were like ‘well, I guess we’re home now, for good, at least for a while.'”

The crowd brought a good energy to the gig, though — Rob says the feeling was in the air that this was going to be everyone’s last concert for a while — and in the days that followed, Rob grabbed a tape machine from his Fishtown studio and brought it to his South Philly apartment to busy himself creatively. After a week, he says he got bummed out, and turned to reading and other activities.

“Luckily I have some roof access, so me and my roommate have had some rooftop dance parties on warm days,” he says. “I’m trying to get out into nature too because, as of now, that’s not off limits, we’ve been going to the Wissashickon, me and my roommate and my girlfriend.”

Below, listen back to our Checking In conversation, peruse Rob’s musical picks, and watch his performance of “The Clouds” via NPR Live Sessions. The entire Facebook Live event can be seen here, and You Know I’m Not Going Anywhere can be ordered now, via Fat Possum.

Checking In With Rob Grote of The Districts

Favorite Song of All Time: “Love Comes In Spurts” by Richard Hell and The Voidoids

“I got this best of Richard Hell CD when I was pretty young, like in sixth grade or something. And I always really loved this song. It has this crazy guitar part in the intro, and has one of my favorite guitar solos in it — the guitarist Robert Quine played with him — in my opinion, one of the top guitar solos of all time.”

Song That Raises Your Spirits: “Ponta de Areia” by Wayne Shorter and “Through Your Hands Love Can Shine (Turbotito Remix)” by Giorgio Tuma and Lætitia Sadier

“[Wayne Shorter] played saxophone with Miles Davis, and that song has one of the best vibes ever. It’s kind of groovin’, it feels like a beautiful morning to me. And I’m a big fan of Stereolab; this song is from the singer Lætitia Sadier, and there’s this remix I stumbled on a while ago. These two songs are hands down the past two years the best vibe songs I’ve ever found.”

Song That You’re Most Proud Of Working On: “And The Horses All Go Swimming” by The Districts

“It was kind of a recording project song, and my friend Molly Germer played violin on it — she did this amazing violin run on this on part – and all around musically, it’s one of my favorite songs I’ve ever worked on.”