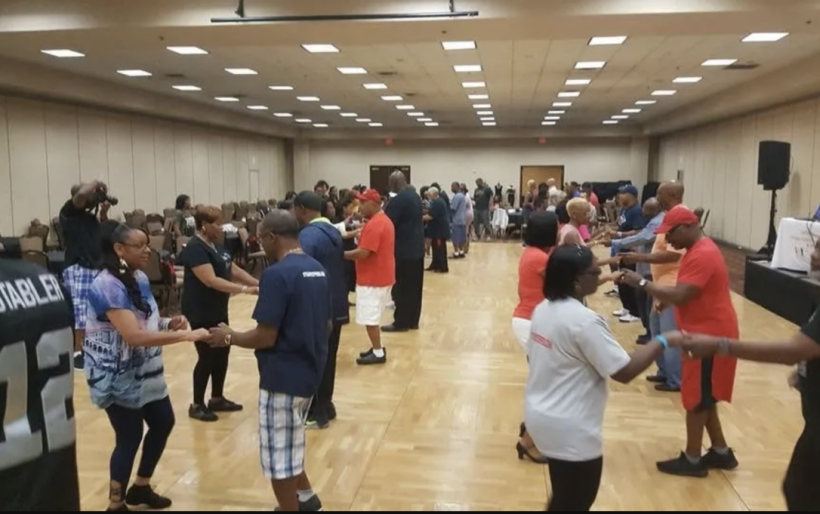 The Philly Bop: How a local spin on a national trend has thrived across generations

In their 2017 TED talk, dance / choreography duo Lisa LaBracio and Camille A. Brown give a concise and encompassing demonstration of the history of African American social dance. Moving through a range of some of the most popular dances throughout the decades like The Cabbage Patch, the Dougie, the Twist, the Nae Nae, and beyond, the performance is a testament to the diversity and enduring social power of Black dance. Speaking to this rich tradition of dance, Brown explains what social dancing is and the role it has played in African American culture.

“A social dance isn’t choreographed by any one person. It can’t be traced to any one moment. Each dance has steps that everyone can agree on, but it’s about the individual and their creative identity. Because of that, social dances bubble up, they change, and they spread like wildfire. They are as old as our remembered history. In African-American social dances, we see over 200 years of how African and African-American traditions influenced history. The present always contains the past. And the past shapes who we are and who we will be.”

In Philadelphia, one social dance, simply known as “The Bop” has its origins in Jazz’s Swing explosion of the 1920s. An intimate and meticulously coordinated dance, The Bop has existed as a beloved tradition in Philly’s Black community for decades and it still remains a staple at cookouts, anniversaries, and family reunions throughout the city.

A regional variation of popular Swing dances from the 1920s — like the Jitterbug and the Lindy Hop — sometime in the 1950s, Philly dancers distilled the hyper, flamboyant movements of Swing dancing into a relaxed, understated partner dance based on a universal, six-step pattern. The dance spread locally being practiced at dance halls around the city.

In the late 1950s, Dick Clark’s American Bandstand was one of the most-watched television programs in the country. Filmed at a studio on 45th and Market in West Philly, the show maintained a de facto segregationist policy that kept Black teenagers off the show. Although there was no “official” race-based policy, young people would arrive at the station before tapings to be selected by the show’s producers. In this process, Black kids were mostly denied access. Despite this, some Black youth still made it onto the show, and arguably it was on American Bandstand that The Bop was first witnessed outside of Philly’s Black neighborhoods.

Known as “The Bopologists” Philly-residents and Dance instructors Audrey Donaldson and June Donaldson published the 2016 book How To Dance: Philly Bop, a 6-Count Dance, a guide to the history, mechanics and social dynamics behind the dance. After a brief historical overview, the Donaldsons give a detailed breakdown of how to do the Bop.

“Philly Bop is a dance that is based on a repeating pattern. Although the count of each pattern may consist of many steps, the essences of the Philly Bop is 6 counts. This 6 count pattern is repeated throughout the dance enabling both the leader and the follower to remain in sync.” The book goes on to detail how these counts correlate with each dancer’s steps and movements.

Although the specific mechanics involved in the Philly Bop are unique to our city’s dance culture, there are many regional variations of similar post-Swing dances Most famously, Chicago Stepping is a dance that evolved in the wake of the Jazz era and is similar to the Philly Bop. Audrey Donaldson explains the development of the dance and how many regions have their own dances that share common origins with the Bop. “My understanding is that as the dance traveled across the country, people had different takes on it. In D.C., they have something called Hand Dance which is very similar to the Bop but our “5,6” is their “1,2.” It’s different but we can dance with someone from D.C. and it looks pretty much like the same dance.

June Donaldson continues, explaining that the sound of Motown with its rich, elegant arrangements and driving backbeat, pushed the evolution of the dance, further emphasizing its reliance on smooth, effortless movement and coordination. “The Lindy Hop and the Jitterbug are both 6-count dances. People were dancing to Big Band Swing music and it was kinda fast, but then Motown came out a little later, so we smoothed that thing out.”

Today, the Bop lives on as an integral part of Black Philadelphian dance and social culture. There is not a single Block party, cookout, family reunion, or oldies night in the city that would be complete without boppers. I personally grew up watching family members and elders in my neighborhood do the Bop. My mom, Jackqueline Morrison has been an active bopper since she was a child, she learned the dance when she was only 7 years old and as a teenager, she would teach the Bop to boys in the neighborhood.

“My mother and her brother used to Bop all the time at family parties. Everybody made a big fuss over you when you did it. It made me feel important when I was little and as I got older it made me feel really sexy! (laughs)”. Like my mom, many boppers in the city cut their teeth dancing at the Arcade Ballroom in North Philly in the 1960s. Although the massive ballrooms and banquet halls of the past have been lost to development, gentrification and the march of history, in 2020 many venues still exist where the Bop is done, supporting a vibrant dance scene.

At venues like The Crab Tavern in Darby, Treasures on Germantown avenue, Chuck’s Alibi in Northeast Philly, New Jersey’s Stardust Ballroom and beyond, enthusiastic dancers gather to groove to classic bopping songs like Leon Huff and Grover Washington Jr.’s “I Ain’t Jivin’, I’m Jammin’”, Smokey Robinson & The Miracles’ “Happy Landing”, Richard “Dimples” Fields’ “Jazzy Lady” and Luther Vandross’ classic “Bad Boy / Having A Party” as well as “Are You Using Me?” his epic collaboration with NYC House music legends Masters At Work.

In the wake of the COVID-19 pandemic, much of the area’s bop-friendly venues were forced to temporarily close down. Despite this, online spaces like the Crab Tavern Dance Family Facebook group and the Donaldsons’ website Dancinginphilly.com have kept the community going with lessons on the dance, videos of partners performing “social distance dances” while dancers share pictures and memories of fun times dancing and socializing.

Throughout the decades, dancers have learned the bop from their parents, grandparents, aunties, and uncles, thus creating a continuing lineage that stretches back into the Jazz era and beyond. Although our city and the world around it is fundamentally different than it was when the dance first appeared, the Bop has continued on and is still going strong, standing as an integral part of Black Philadelphian social life and as a testament to our city’s rich dance culture.