"A giant of immeasurable skill and heart": An appreciation of Malik B, founding member of The Roots, gone at 47 - WXPN 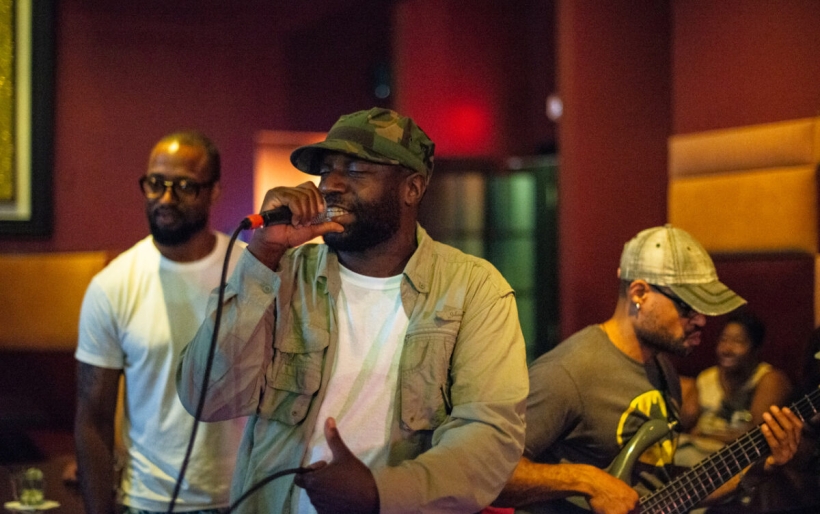 Malik B performing in 2013 | photo by James Johnson | livefromphilly.tumblr.com | courtesy of the artist

“A giant of immeasurable skill and heart”: An appreciation of Malik B, founding member of The Roots, gone at 47

Before the late Malik Abdul-Basit (aka Malik B, aka M-ilitant aka Malik Bliz-unt) and his group The Roots blew up, he was a guy we knew from around the way in West Oak Lane.

Some days Malik could be found at the corner of 68th and Broad freestyling, or hanging out on 15th Street, sitting out on the stoop of his mom’s house smoking beedies and talking fast. Other days, he’d be on the move, stopping to greet people, or crack jokes, and talk shit, or to say sweet things to our mothers and aunties. A devout Muslim, on Fridays he would go to the Masjid to pray and fellowship with our fathers and uncles.

A gifted lyricist who could freestyle off the top of his head forever, in the summer of 1991, Malik would attend Millersville University, where a chance meeting with another young MC — a South Philly 19-year-old named Black Thought (aka Tariq Trotter) — would change his life trajectory. The story goes that Trotter’s friend told him that there was a rapper on campus that would “eat him alive” and Thought sought Malik out to test his friend’s theory. The two equally skilled and fierce MCs would battle to a standstill before deciding to join up later as partners in Trotter’s group, The Roots.

For many, the video for The Roots’ 1994 single “Distortion to Static” would be their introduction to Malik B. The scene is dark, muted, and bizarre. The band is holed up in some nameless basement while fiery sparks pop out of a damaged wall socket, a creepy bobblehead doll spins, and jerks frantically and the song’s chorus laughs at us mockingly. Seated at a table next to his partner-in-rhyme, Black Thought, Malik emerges from the shadows and kicks his verse, an unfolding maze of nimble patterns, rhythmic turns and oddball imagery:

Now, go get your dictionary and your Pictionary
‘Cause much affliction with my diction friction slips and carries
Words and herds like some cattle in the steeple
People, there’s no equal or no sequel
So policies, of equalities get abolished
Demolished, distortion of the static’s gettin’ polished
Urges of splurgin’ words will just be merged
Together, damn it’s quite clever, however
You never, can sound alike, lyrics don’t be poundin’ like
These, troops, who be’s, Roots
Insult ya, mellow by culture, rhythmatic vulture
Approach ya, with Magnetic shit that’s Ultra
I make MC’s dangle like a bangle
Strangle from every angle, my lingo jingles
And it jangles under Kangols
Nahh them niggas don’t want to tangle
‘Cause Roots get loose, negros get juiced like the mango
To be particular, extra-curricular, for pleasure
Measure, in any weather, value more than the treasure
Baby, you’re sayin’ maybe, then comin’ to flex
Now you wonder what’s next

This was Malik’s rhyme style in a nutshell, a gift for fluid, winding wordplay, anchored by his tremendous command of vocabulary. Listening back to “Distortion to Static” and The Roots debut Do You Want More?!!!??!, what stands out the most is the chemistry between Malik and Black Thought. Whether it’s the breezy, polysyllabic verses they trade on “Mellow My Man” or the slick, sing-songy bars on “Swept Away”, it was clear that Malik and Tariq could take their already fruitful creative partnership to the highest heights. Hip-hop has known so many great MC duos — Q-Tip and Phife, Erick Sermon and Parrish Smith, Prodigy and Havoc, Run and DMC — and it would not be a stretch to include Malik and Black Thought in that pantheon.

Malik’s friend and collaborato the artist / producer Carl Madison, remembers the MC, speaking to his chemistry with Black Thought as well as the otherworldly talent he displayed during their recording sessions.

“His wordplay and delivery flowed effortlessly like drinking water whenever he laid down a verse,” Madison says. “I often found myself listening/marveling at the cadence and lyrical patterns he created while in the midst of our recording sessions. He would spit beyond the 16 bar verses with ease. It was almost as if he was testing the limits of the track while daring any other emcee to try to do better.  Seeing that, reminded me of why Malik and Black Thought had a chemistry unmatched and respected among music enthusiasts. Still, what I’ll remember most about him will be his charisma and humor.”

The Roots released two more acclaimed albums, 1996’s Illadelph Halflifeand 1999’s Things Fall Apart. Malik is featured heavily on both, but by this time his lyrics grew a harder edge, and he painted his own tumultuous inner world and illustrated the contours of the street with sharp and vivid detail. Rumors made their way back to the neighborhood that Malik and Philly’s favorite sons were on the outs. When we’d see him around the way, we’d ask about the band and the beef, until it didn’t make sense to ask anymore.

Malik would make a brief return to the fold on 2006’s Game Theory. His appearance on the rowdy, aggressive anthem “Here I Come” is especially triumphant. Piling up words and syllables recklessly, Malik’s presence on the track is that of a wild-card, a gun-slinger, aiming his verses at some ever-moving target and firing until the clip is empty:

“I’m in the darkness, heartless, fuck you regardless
Move with hardness, y’all just pressin charges
It’s often injury, floss and force my entry
This penitentiary, knockin’ up niggas for centuries
It’s elementary like KRS and evidently
Incidents they all stress, I’m lawless”

Malik would forge another fruitful musical partnership with Jersey-born producer Mr. Green. In their “Live from the Streets” video, Green samples a recording of singer/songwriter Kevin Brown playing guitar in Rittenhouse Square, chopping the impromptu performance up and transforming it into a hip-hop track for Malik to rhyme over. The finished product would circulate widely, achieving viral status and lay the foundation for future Malik and Green collaborations, including their 2015 full-length Unpredictable, a wonderful collection of soulful, introspective music that found Malik wrestling with demons and proving that he hadn’t lost a single step on the mic.

On July 29th, 2020, word began to circulate that Malik had passed away at age 47. Friends, family members, fans, collaborators, and folks from the neighborhood exploded in an outpouring of grief, shock, mourning, and appreciation for the music that Malik gave us.

Some men walk the Earth with faith by their side like a sword. Their words, actions, hopes, dreams, and desires are inextricably tied to their relationship to the highest power. If there were ever such a thing as a perfect man, he would not have use for such deeply penetrating, all-encompassing faith. The type of faith that Malik had is reserved for people who struggle, fail, and make mistakes. It allows them to use their words, their intentions, and their talents as an instrument to put more beauty into the world.

This is what Malik B did every time he touched a mic. Hip-hop has lost a giant of immeasurable skill and heart, Philadelphia has lost a brother and our sweet, working-class Black neighborhood has lost one of its favorite sons. God bless Malik, his family, and everyone that knew and loved him. We wish solace and comfort for them and safe travels for him.