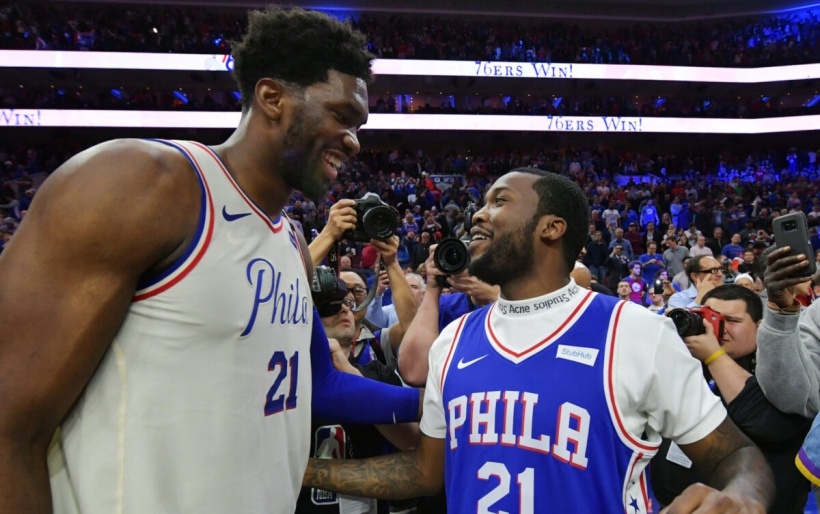 A hip-hop history of the Philadelphia 76ers

Along with the Eagles, Phillies and the Flyers, the Philadelphia 76ers are a central part of the city’s rich sports culture. With basketball’s popularity in poor and working-class communities, the relationship between hip-hop and pro basketball is apparent. This relationship has a long and storied history that has played out for decades in cities around the world with Philadelphia being no different. Philly’s hip-hop community has long expressed our love for the Sixers time and time again in the form of endless shout outs and references in rap songs.

Throughout the years, many former Sixers like Allen Iverson, Lou Williams, Chris Webber and more have been known to dabble in rap music themselves. In 1994, Sixers point guard Dana Barros even dropped a sleeper single called “Check It” which featured a great remix from Jazzy Jeff. “Check It” even got some minor play on Radioactive, Power 99’s influential late-night mix show.

Whether it was the time former Sixers forward Tim Thomas appeared in a classic 2 Raw For The StreetsDVD in the early 2000s or 2017 when current Sixers star Joel Embiid danced shirtless on stage at a Meek Mill concert, the day before the team announced that he had a knee injury, Philly hip-hop and the Sixers have a unique and longstanding bond. In honor of NBA basketball’s post-COVID return, we’ve put together an admittedly rough and incomplete hip-hop timeline of the Philadelphia 76ers.

When the Philadelphia Warriors moved to San Francisco, it left a void for professional basketball in Philly. In May of 1963, a duo of investors named Irv Koslov and Ike Richman purchased the Syracuse Nationals basketball team and relocated the franchise to Philadelphia. A contest was held to choose a name for the team and among the nearly 4,000 entries the “76ers” moniker was chosen, the name being a callback to the 1776 signing of the Declaration of Independence here in Philadelphia. It was with this purchase and the subsequent naming contest that the Philadelphia 76ers were born.

In addition to these financial challenges, a pervasive stigma existed that pro basketball was “too Black” and that the sport was riddled with drug use. The racial implications of these stigmas were fed by both leagues’ demographic makeup and the ABA’s playing style in particular. Respectively, the leagues were also known for their different styles of play, with the NBA prioritizing a slower-paced half-court offense while the ABA allowed for a more freewheeling, highflying style. The ABA’s Allstar Weekend also featured the dunk contest, an event which highlighted the players’ dunking ability, while unintentionally reinforcing racial stereotypes about Black athletic aptitude.

In his International Journal Of Sport & Society work, Too Black: Race In The “Dark Ages” Of the Nation Basketball Association,environmentalist and sociologist Matthew Schneider-Mayerson explores the ways in which both leagues playing styles were compartmentalized racially. “As the rival leagues competed, the ABA and NBA developed distinct styles that developed racial associations.” Schneider-Mayerson goes on to explain how fans, critics, and even players themselves would refer to the ABA as “the Black league.” When the two leagues merged in 1976, the aim was to rehab professional Bsaketball’s image and stamp out some of the cultural signifiers that defined the ABA while absorbing its Black superstars and playing style into the NBA.

One such superstar who would make the leap from the ABA to the NBA was New York Nets forward Julius “Dr. J” Erving. A veteran who built his legend playing at Harlem’s Rucker Park, Erving brought his elegant above-the-rim playing style to the NBA that year, joining the Sixers in the 1976-77 season after Nets ownership reneged on a promise to raise his salary. Although his career predates the culture’s initiation, Dr. J’s miraculous dunks and effortless cool made him an idol to many first-generation hip-hoppers. In 1983, Dr. J would lead the Sixers to an NBA Finals win over Magic Johnson’s Lakers, a series in which Erving would pull off his famous “Rock the baby” cradle dunk, an iconic play that lives on today.

West Philly-born rapper / radio host Lady B is well-known as the first woman in rap history to release a solo single. A lesser-known fact about Lady B is the fact that she was first introduced to hip-hop and the art of rapping by two 76ers legends, Darryl Dawkins and World B. Free. “The first time I heard Hip Hop was in Brownsville Brooklyn. I had came out of high school and started hanging out with World B. Free. I was in awe.”

When it came time to record her debut single, Lady B took the rhyming routine skills that she had built up in the clubs and poured them into her track “To The Beat Y’all,” a cut that exemplified the Disco-flavored sound of early rap records and solidified Lady B’s place in hip-hop history.

In 1975, a Temple University student named Randy Childress spent his time working for the Philadelphia 76ers. In addition to his school work, Childress also played bass in a band called Fresh Aire. According to a Temple News story on the song’s origins, Childress was charged with writing the Sixers new theme song in the Fall of 1975. The resulting tune, “Here Come The Sixers” is a catchy Disco-tinged sing-along that would be played at home games in Philly until the team defeated the Los Angeles Lakers in the 1983 NBA Finals.

In the wake of the Sixers championship victory, a new song “Keep It On” by Philly electro-rap pioneers G-Five (fka Galaxy 5) was recorded. A fun, lighthearted hype up song, “Keep It On” gives loving shout outs to sixers players like Moses Malone, Dr. J, Maurice Cheeks, and Andrew Toney. The song even features a cameo from legendary Sixers announcer Dave Zinkoff.

Following the Sixers 1983 NBA Finals win, the franchise drafted future hall of famer Charles Barkley from Auburn. A powerful, and dynamic, forward, Barkley would eventually take the mantle from the team’s aging superstars, Dr. J and Moses Malone. In addition to his play on the court, Barkley’s outspoken, confrontational nature made headlines off the court. After several confrontations with reporters, Barkley’s relationship with Philly’s press during his time here was openly hostile.

In December of 1992, fresh off his now-infamous post game rant against the Daily News and The Inquirer, Barkley was tapped to appear on the cover of The Source magazine alongside Spike Lee, who was one month removed from the release of his epic Malcolm X biopic  At the time, The Source was the standard for hip-hop journalism and their cutting-edge issues. This made the publication the perfect host for an unfiltered discussion between two famous Black men who weren’t afraid to express unpopular opinions or tackle issues of race and politics openly.

When Hampton, Virginia-born, Georgetown-educated superstar Allen Iverson was taken by the Sixers with the first pick of the 1996 draft, it was clear that the barely 6 foot guard would usher in a new era for the Sixers. Beyond his impact on the Basketball court, Iverson would help create a cultural sea-change in the NBA whose impact is still felt today. Affectionately known referred to by the city’s residents as “A.I.”, Iverson was a product of the hip-hop generation, whose swaggering attitude, fashion and passionate approach to the game made him a beloved figure in the city and around the world. With his cornrows, and tattoos as well as his penchant for rocking flashy jewelry, A.I. was largely responsible for bringing hip-hop’s cultural aesthetic to the NBA.

Throughout the late 90s and early 2000s, Allen Iverson’s reign over the NBA dovetailed with a musical renaissance in the city. As A.I. dominated on the court, local acts like The Roots, Jill Scott, Eve and State Property ruled the charts, creating a cultural feedback loop between sports and music that would define the era. In the summer of 2000, Iverson would make his own foray into music, by releasing the track “40 Bars” under the stage name Jewels. A rugged, mid-tempo track, “40 Bars” came under fire for its violent, hardcore lyrics and use of homophobic slurs. Iverson would later express regret for creating the track and make a sincere attempt to rehab his public image. In 2001, Iverson and the Sixers would make a thrilling run to the NBA Finals and later that year, Iverson would appear alongside LOX MC Jadakiss for the now-classic Reebok A5 commercial, a spot that has gone down as one of the most memorable sneaker ads in history.

The less that is said about this, the better. For reasons that we’re still not sure of, in 1998, the organization decided to introduce a human-sized, sometimes durag-wearing rabbit named “Hip Hop” as their mascot. At the time, Sixers owner Pat Croce talked about the logic behind Hip Hop’s creation; “We didn’t want a clown or a bear, we wanted something sleek, something cool. To me, Bugs Bunny is cool. Our rabbit is cool.” But Hip Hop was not cool. A joke to some and pure nightmare-fuel to others, Hip Hop was eventually laid to rest in 2012. R.I.P. Hip Hop.

Founded in 1904 by American tennis and wrestling champion, Frank P. Mitchell and Scottish golfer Charles M. Ness, Mitchell & Ness has been a leading name in sporting goods and athletic wear for well over a century. By the 1930s, the brand was outfitting professional sports teams, even supplying uniforms for the then-up and coming Philadelphia Eagles franchise. In many respects, Mitchell & Ness’ relationship with Hip Hop culture deepened when the brand launched Hardwood Classics, a new collection of vintage NBA jerseys. Commonly known as “throwbacks”, these jerseys were faithful remakes of vintage jerseys from the 50s, 60s, 70s, 80s and 90s and they were wildly popular in the 2000s.

Whether it’s Beanie Sigel’s Iverson jersey or Freeway’s vintage Clyde Drexler jersey in the “Roc Da Mic” or the kelly green 60s-era Joe Namath jawn that Boo Bonic wore in Philly’s Most Wanted’s “Please Don’t Mind” video, Mitchell & Ness jerseys were staples in Philly hip-hop videos and essential element of street fashion. Even international acts like Jay-Z, Fabolous, Nelly and NSYNC got in on the throwback trend. Beyonce and Destiny’s Child were even famously booed in Philly for wearing Lakers jerseys during their performance at Game 4 of the 2001 Sixers vs. Lakers game.

Meek Mill freed from prison, arrives at a Sixer game in a helicopter – April 24th, 2018

On Tuesday, April 24th, 2018, Meek Mill was released on bail from the State Correctional Institution following an order issued by the Pennsylvania Supreme Court. That night, the Sixers also faced off against the Miami Heat in Game 5 of their First Round, Eastern Conference playoff series. Upon his release, Meek was met with a helicopter which transferred him from Chester to the Wells Fargo center. As word got out that Meek had been released and video of him boarding the helicopter began to circulate, social media exploded with excitement and speculation.

When Meek arrived at the arena that night, he quickly changed clothes and ragn the liberty bell for the pre-game ceremony. That night, the Sixers went on to win Game 5 and advance to the next round of the playoffs. Although the Sixers were eventually eliminated from the playoffs, that night in the Spring of 2018 would go down as a significant moment in the city’s history. The wrongful conviction that hounded Meek for nearly a decade would eventually be overturned and the rapper would go on to serve as the public face of criminal justice reform. The night that Meek left prison and arrived just in time to celebrate the Sixers will forever be a part of Philly lore, that night and the events that led up to it are a perfect example of the deep connection between the franchise and the city’s hip-hop culture.