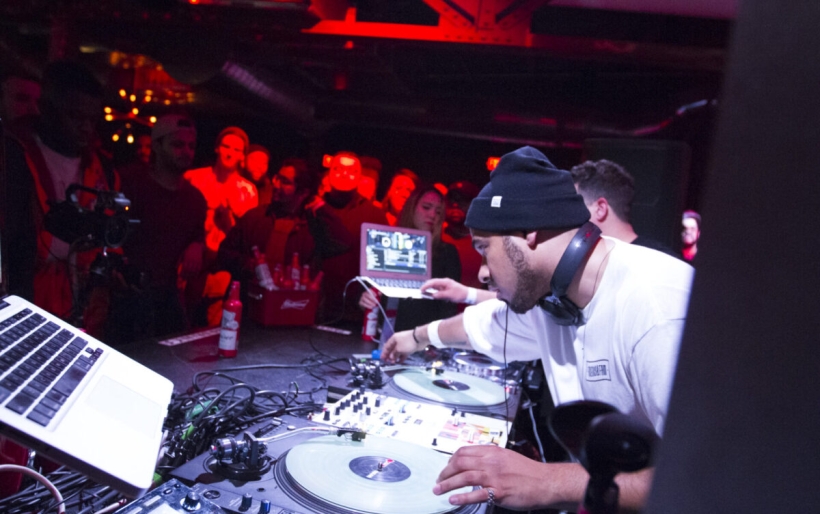 Inside Law’s Lair: Matthew Law talks the role of the DJ during quarantine

Philly born and raised DJ / producer Matthew Law is not only one of the city’s finest selectors, but he also has a global reputation and a long resume of rocking parties on nearly every continent.

Known for his energetic and inventive mixes, Law is a DJ’s DJ, skilled at lighting up dancefloors and respected amongst his peers. With nightlife effectively put on hold in the wake of COVID19, Law created Law’s Lair Radio. Produced alongside filmmaker and artist, Simone Holland of Tetra Creative, the mixshow which has acted as a space for Law to play the music that he wants and interview top DJs from around the world.

We spoke with Law about everything from the economics of DJing in a pandemic to being your most creative self.

The Key: Well, for starters, how have things been for you during this whole quarantine? As a person, as a human, but also creatively?

Matthew Law: I mean, it’s weird. Like it feels like it’s been 10 years, you know? like the craziest thing I think that comes to mind is you think about how you’ve been during this time, but the perception of time in general right now. It’s like, I can’t even really quantify it. It’s been sobering, especially now that we’re in this election cycle and which has really kind of made time strange for me.

I’m in a happy and loving relationship with my partner, Simone. She’s an amazing multi-disciplinary artist and filmmaker. So we have actually been able to grow even closer because we ain’t got nowhere to go. [laughs] Everybody has different experiences when it comes down to it but I’m really grateful to have her as my rock in all of this.

TK: I’m curious about something. So, the clubs are closed, obviously and as a working, professional DJ there’s an economic impact. When quarantine first happened, a few folks were hitting me up like, “yo, you should just stream just like, just like just go stream.” And I’m like, no, I’m gonna write more so that my rent will be paid through this whole thing. You know what I mean? People love the music and want the social connection and music creates. And as DJs, that’s our job to provide that. But I don’t think that people necessarily understand the economic impact of this shit.  Have you felt the economic impact of the clubs being closed and, for as much as you want to share, how has it been navigating that?

ML: I mean, it’s undeniable. The entire entertainment industry as a whole and not just DJing, like anything that would be deemed recreational. At the beginning of quarantine, I realized that I didn’t want to be on the internet playing, you know, whatever the new pop record that was out. Quarantine has allowed me to be in my most creative space — because if I was still playing in clubs, how many, like new Drake requests would I have gotten and would have been obligated to hold the room by playing those records? Now on it’s radio. So I’m not beholden to that.

I actually moved away from the streaming on Twitch when Mixcloud started doing their live stream. Like I said, like I’m really focused on the music and Mixcloud itself as a platform, they don’t delete me [for playing copyrighted music during DJ sets]. And I’m part of Mixcloud select. So I also get paid off of subscribers.

TK: I wonder when these payment structures are going to be changed, on the streaming platforms in particular. So that they become more equitable towards artists, you know what I mean? These streaming platforms are running ads against your music, and the artist isn’t seeing really any of that and it bothers me. I wonder what kind of movement is going to emerge to change that payment structure.

ML: Yeah. I don’t know. I mean, I think that Bandcamp has been the other kind of really, really interesting shift because like that kind of shifts the narrative of the potential for support. A lot of people have been barking up one tree with, playlisting and making sure that you’re on that and everything and putting it on all the DSPs and completely forgetting about Bandcamp. Like you can now monetize on SoundCloud. You know, I made a couple bucks monetizing some of my older stuff that was on there.

Cause like if there’s no clear return when you put stuff out on the streaming platforms, you also don’t even know if there might just be a bot there listening to it, or whatever, but nothing is going to be like a hard sale to get them to buying your vinyl off the bat and people buying it. I scour Bandcamp specifically for music for the radio show, because I know and want to support artists.

TK: I feel like there’s a different level of…..I hate describing people as consumers, but there’s a different level of consumer engagement when you release something and you ask folks, “yo, I’m only putting this on Bandcamp. The money directly goes into my pocket after Bandcamp takes their little cut. This is what I want y’all to do to get this music. Could you please buy this?” And I have physical copies. A person going through that to pay you, as opposed to, streaming your record. It’s like, not only are you getting a larger piece of the pie, but it’s showing a deeper engagement or even like an emotional connection to the artist. You know what I mean? I buy stuff for my show specifically on Bandcamp. Like, yo, you know, cause I know this is going to go to you.

ML: Like people bought my stuff off of Bandcamp. I have literally seen them put that in their DJ mix in Denmark or whatever, And then they tag me on Instagram and it’s like, I see the sale. And then I see where it went and now they’re spreading the music to their community.

ML: Yeah. Yeah. I mean, growing up on Philly radio to a point…I think I stopped listening to the radio after Inner City with Tiffany Bacon [Power 99’s early 2000s Sunday night show that highlighted poetry, underground hip hop as well as the burgeoning neo-soul movement] went off. Like that was the last thing that I kind of was like, cause that kind of birthed a lot of what I understood as what was coming out of the Philly underground besides State Prop and any of that stuff. But I’ve always looked up to cats like Giles Peterson and Benji B, Anthony Valdez and like yourself, that consistently try to introduce people to new music within a framework of quality, like not popularity.

I can play popular music all day long, but if I’m going to put my name on something, I want to make sure that what I’m putting together is coming from the heart. That’s where I try to create that conversation on the dance floor, but this is a totally different space. So the conversation is a little more pointed and a little bit more like I’m sharing. And if you are coming to hear me share, this is what you’re here for. I am now back to dictating the music that I am championing. You know, that’s a big thing then also on the interview side. For Season 2 we had DJ Moma who started [the dance party] Everyday People. We had Cosmo Baker, we had Khalil who started Livin’ Proof and Back To Life. And the finale has DJ A-Track. It’s like a true to form mix show.

Like I’m mixing, cause I still want people to understand that I’ve got skills. That’s just where I come from. But there’s also the element of introducing people to the conversation around the music that’s being played and also around the current climate. That’s really important.