Chatting with Culture Cypher Radio's John Morrison about his new e-book on the The Roots' classic Do You Want More?!!!??! - WXPN | Vinyl At Heart 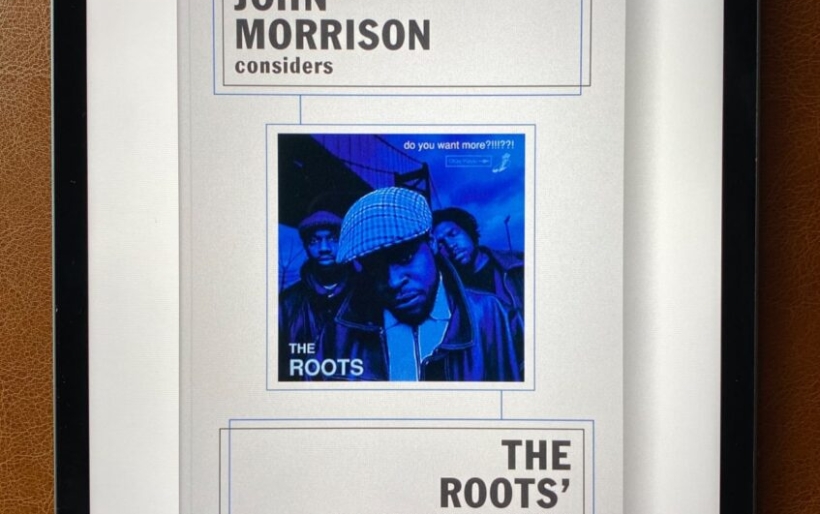 Chatting with Culture Cypher Radio’s John Morrison about his new e-book on the The Roots’ classic Do You Want More?!!!??!

The one thing about you should know about John Morrison is that whether he’s playing the role of a writer, DJ, or producer, he’s always going to find a way to educate about the music.

Like a curator at a museum, John has the ability of not only giving interesting facts about different musical pieces but also does a great job of describing the emotional impact it had during their releases, especially when it comes to music from his hometown Philly. This year John was able to bring his talents to Halfway Books and wrote his first book about the impact of the legendary Roots crew’s second album Do You Want More?!!!??!., which times perfectly to the album’s 25th anniversary.

Earlier this month, I got a chance to sit and talk with my XPN brother about creating his book as well as interesting facts readers can expect to discover about The Roots creating their sophomore album. Listen to the whole conversation and read some interview highlights below.

…on the Philly hip-hop scene before The Roots arrived.

Philly kind of immediately went from DJs in the park to the drum machine era. There are very few Philly rap records up until The Roots that were made with live instruments, so they were very much an anomaly in the scene. But you also had Black Thought and Malik B, who were both battle-tested, sharp MCs. So it was kind of this tension between the band’s identity as a live band, and people thinking that was a novelty, and their aspirations of being a great hip-hop band.

…on how The Roots progressed between their earliest releases and Do You Want More?!!!??!

From Organix to that period, it’s a drastic difference, sonically. Do You Want More?!!!??! and the EP [From The Ground Up] were both recorded at Sigma Sound, if I’m not mistaken, with David Ivory. And they’re experimenting with the sounds, experimenting with how to set up the microphones to make Quest’s drums sound really heavy and grimy. They’re experimenting more, that’s probably the major takeaway when thinking about how they progressed from Organix to that period.

…on songs from Do You Want More?!!!??! that John would like to hear The Roots break down lyrically a la Jay Z’s Decoded.

I think, lyrically, a lot of the songs on this are pretty straightforward. It’s like, “Oh, this is a story. This is that.” But I would love to see a Decoded with the background stories behind the lyrics with this album. I would love to hear them talk about “what made you write ‘Distortion to Static’?” or “what made you write a song like ‘Silent Treatment,’ the love song on the record?” There are certain lines where you’re like “oh, what did that mean?” but for the most part they’re pretty direct and straightforward. I would actually like to hear what inspired the lyrics.

…on music that The Roots don’t get enough credit for inspiring.

I definitely think that The Roots probably inspired a ton of college jam bands throughout the years. If you think about it, Black music specifically, when The Roots came out in the early 90s, Black music wasn’t really band-oriented. It was mainly sampling, drum machines, synthesizers. So I know as a young person, they inspired me to want to tap in and learn to play instruments. I’m pretty sure I started piano and composition lessons as a young person right after this album came out. They also brought this idea to the forefront of…you know, hip-hop bands never did covers. You wouldn’t go to a hip-hop show and see someone doing someone else’s song. But [The Roots] would do the Hip-Hop 101 thing where they’d incorporate classic breakbeats and classic songs. I think they really ultimately helped expand the way hip-hop is made and the way it’s performed, and it helped expand our idea of how this music can be created.

Buy John Morrison’s e-book on Do You Want More?!!!??! by The Roots here, via Halfway Books.