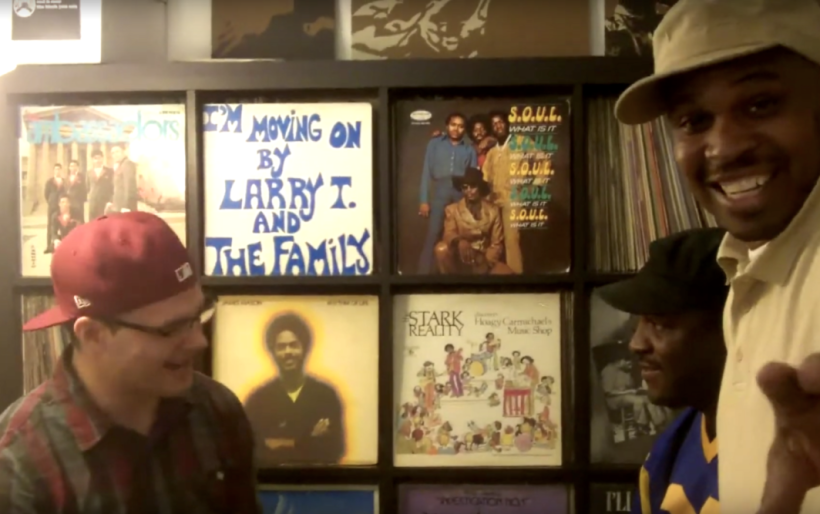 From the culture’s very beginning, hip-hop has had a deep connection with vinyl records. Through sampling and DJing, records are literally a part of hip-hop’s DNA. In the 80s, expertly curated vinyl compilations like Paul Winley’s Super Disco Brakes, Lenny Roberts and Lou Flores’ Ultimate Breaks & Beats, as well as Dusty Fingers and the early comps released by San Cisco’s Luv N’ Haight label in the 90s, helped to expand and deepen the musical vocabulary of hip-hop DJs and samplists. Whether it was rare soul 45s, private press jazz, psychedelic rock or heavy funk from around the world, hip-hop heads have initiated a global crate-digging culture that is built on a seemingly boundless knowledge and enthusiasm for all kinds of music.

In celebration of this tradition, the culture of digging, and the joy of music, West Philly-born DJ William “Kencut” Smith – along with his partners Sammy Cook and Jeffrey Dixon (aka Jaz/Cut Precise) operating the camera — created an unheralded YouTube series called Crate Raiderz. Similar to Fuse TV’s Crate Diggers which aired around the same time, Crate Raiderz found Kencut and Sammy Cook visiting the homes of some of the city’s best DJs and most astute, working-class record collectors and checking out their collections. Speaking with The Key for this piece, Kencut explains how Crate Raiderz was born out of the crew’s childhood love of records.

“I believe we started recording them in 2012, and our motivation was we collect a lot of records and we been doing so since we were 14 and 15 years old, and we know a lot of friends who do the same. So we wanted to show their collections.”

From Philly hip-hop pioneers like Cash Money and Groove DaMoast to true musical aficionados like Skeme Richards, Luke Raws, and more, Crate Raiderz is an important documentation of the city’s deep vinyl culture. For the series’ very first episode, Sammy Cook and Kencut link up with Blaak The 9th Man, veteran Philly DJ/Producer, and a veritable encyclopedia of musical knowledge. As Blaak, and the Crate Raiderz crew buss it up and talk shop, the camera pans around the record-lined walls of Blaak’s studio space revealing gems from South African rock pioneers Assagi, Tom Scott’s infamous psychedelic-jazz opus The Honeysuckle Breeze, cuts from Bahamadia, Yusef Lateef and more. The clip reveals the magic of the Crate Raiderz show, passionate heads just sharing a love of music that transcends genre and era. Blaak, whose father was also a DJ also explains how that deep personal connection plays a role in his work maintaining this rich musical culture. “I wasn’t a normal kid, yahmean? Fuck toys at Christmas, give me some records, and I’m good. I used to go shopping with my pops. It’s not just about digging, I love this shit and it runs in my family.”

Josh “Froz 1” Kwedar appears in episode two. Flexing an impressive collection that includes jazz-rock holy grail The Stark Reality, James Mason’s Rhythm Of Life, and many other gems. Kwedar explains that in his episode of Crate Raiderz, we are only seeing a fraction of his collection.

“I was actually in the middle of moving out my current apartment at the time, and had all of my records boxed up!  The room we shot it in was actually my bedroom, but I had my bed, dresser, etc. broken down to prepare for the move. We had a hard time finding a time to shoot that worked for everybody so I just bit the bullet and unpacked enough records to fill my shelf.”

Now known as one of the foremost authorities on Philly soul 45s, Crate Raiderz caught Kwedar before he had been fully bitten by the 45 bug.

“I don’t watch the video often, but there’s one point where either Ken or Sammy motion towards some 45 boxes and I say something to the effect of ‘I’m not really trying to get into 45s all like that…’. How times have changed.”

One of the most poignant interviews on Crate Raiderz is with late record store owner and music historian Bruce C. Webb. Affectionately known as “Mr. Webb”, his store was located at 22nd and Ridge in North Philly. A far cry from the hip and nicely manicured record stores that most consumers buy vinyl from today, Mr. Webb’s store was a hub of chaos, with endless boxes of records stacked up to the ceiling, and bursting with dusty vinyl, a true digger’s paradise. Mr. Webb begins the segment by reminiscing about the Jazz and Soul music that he grew up on. Surprisingly, Mr. Webb then proceeds to pull out some classic Philly hip-hop vinyl like Steady B’s underground heater “Bogardin’”, Fresh Prince & Jazzy Jeff’s debut Rock The House, and the ultra-rare 12 inch by 90s Philly rap crew Lyrical Underworld. Filmed about three years before he passed away in 2017, Mr. Webb’s interview finds the veteran record store proprietor at 80 years of age, but still sharp, bursting with knowledge, energy, and enthusiasm for the music.

Despite the fact that Dixon, unfortunately, passed away in 2018, the crew has hopes of one day reviving the series.

“Well, music runs in the blood in Philly,” Kencut explains. “Our culture is the arts and it’s been passed down from generation to generation. As of now, we had talks of recording new episodes one of our members, Jaz passed away a couple of years ago. He was also our cameraman & editor. Hopefully, after this pandemic kicks over, we can start something back up. R.I.P DJ Jaz.”

With its two-dozen videos on YouTube that feature appearances from Max Orchester of Brewerytown Beats, Mr. Sonny James, Rocdaspot, and more, Crate Raiderz provides viewers with an in-depth representation of our city’s rich vinyl culture. An often unexplored and under-recognized element of popular culture, crate-digging allows us to explore our deep love for music as we embark on an unending quest for the perfect beat.