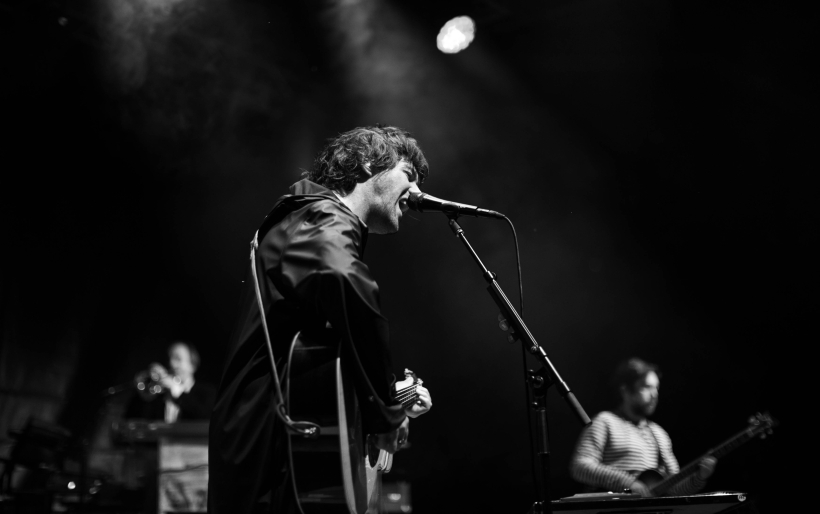 Midway through a two-hour, 21-song performance at Bethlehem’s SteelStacks last night, Conor Oberst of Bright Eyes told the audience “The set is gonna be kind of long, because we don’t know when we’ll be able to play again.”

The feeling of unease was palpable for many reasons: the big-picture timing of a late pandemic tour, the mixed feelings about a sold-out crowd gathering as the delta variant surges, the fact that load-in happened as a literal tornado-bearing storm passed across eastern Pennsylvania.

It was a turbulent night. Oberst several times checked in with the crowd, hoping they felt safe, acknowledging the weirdness of touring (deep breath) in these times. But one thing that was clear through it all was that live music, at this moment in history, provides as much a massively cathartic release for the audience as it does for the artist – two parties who have mostly spent a year and a half deprived of it. Together they tore through their feelings on a breezy Thursday night as the beautiful decay of the former Bethlehem Steel plant provided an apropos backdrop.

The refection-and-release began with a tremendous opening performance by Lucy Dacus, playing mostly songs from her acclaimed third LP Home Video. “Thanks for braving the…everything.” Dacus said, joking that she and her band watched the storm touch down, swore the gig would be called off, and got back in their pajamas till soundcheck time. Putting the explosive album closer “Triple Dog Dare” at the opening of their set established a heartrending tone; the Slayer-referencing distortion kick to “VBS” was chilling and thrilling. “Hot And Heavy” and “Brando” were equal parts jaunty and deeply moving, while “Thumbs” – a haunting, meditative song about absentee and abusive parents – was straight-up gutting.

“This is a really sad one,” Dacus said to intro the latter. “I gave that warning at a previous show, and then I realized this is a Bright Eyes show. Y’all are here to get sad.”

It was a funny quip, but “sad” was not quite the correct word for the energy that filled the lawn when Bright Eyes took the stage for their first Pennsylvania show in a decade. Nor was “happy,” exactly. “Charged,” perhaps? Whatever the case, Oberst and his multi-instrumental bandmates Mike Mogis and Nate Walcott – augmented by a local conglomerate of horns and string players – tore through the performance like it was about to be their last. The iconic LIFTED throwback “Lover I Don’t Have To Love” landed second in the setlist, followed by the elegant country tear-jerker “We Are Nowhere And It’s Now” from I’m Wide Awake It’s Morning, followed by a particularly stormy “Four Winds” that found Oberst leaping from the stage to the strings riser and back.

Compared to the more introverted stage presence of pre-hiatus Bright Eyes, he’s truly come into his own as a frontperson – something we saw during a solo performance at XPoNential Music Festival a few years back – and with so many accompanist players bringing the lush orchestrations of studio Bright Eyes to life, Oberst was free to dance, gesture, thrash about, bang on a piano, or pick up a guitar and strum.  Not ready to relent just yet, the band jumped into “Mariana Trench,” a standout from last year’s Down in the Weeds Where the World Once Was, which took us to the first huge singalong of the night: “Something Vague” from 2002’s Fevers and Mirrors.

That succession of songs was a massive opening stroke, and though the set gave way to moments quieter (a powerful “Poison Oak”) and more esoteric (the bloopy electronic tones of “Pan and Broom”) as it moved forward, the crowd stayed engaged. Oberst promised the night would be “shorter than a Marvel movie, and way better” – for the most part, he was right – and though late-set downbeat moments like “Bowl of Oranges” and “First Day of My Life” saw his voice growing ever more raw and creaky, remember that this is a person who in 2002 wrote “it’s the ones with the sorest throats / who have done the most singing.” He was not kidding with that lyric, he clearly takes it as a mantra — and as he tossed a bouquet of white roses to the crowd as the main set drew down with “Comet Song,” it’s clear the fans were right there with him.

Check out photos from the show below by XPN’s Rachel Del Sordo, along with setlists from both artists. Bright Eyes’ tour continues tonight at the Palladium in Worcester, Massachusetts, followed by a Saturday show at Forest Hills Stadium in Brooklyn with Japanese Breakfast and Lucy Dacus.

Encore:
First Day of My Life
I Believe in Symmetry
One for You, One for Me Lucy Dacus setlist
Triple Dog Dare
First Time
Hot & Heavy
VBS
Brando
I Don’t Wanna Be Funny Anymore
Thumbs
Night Shift
Related Content
View All Related Content