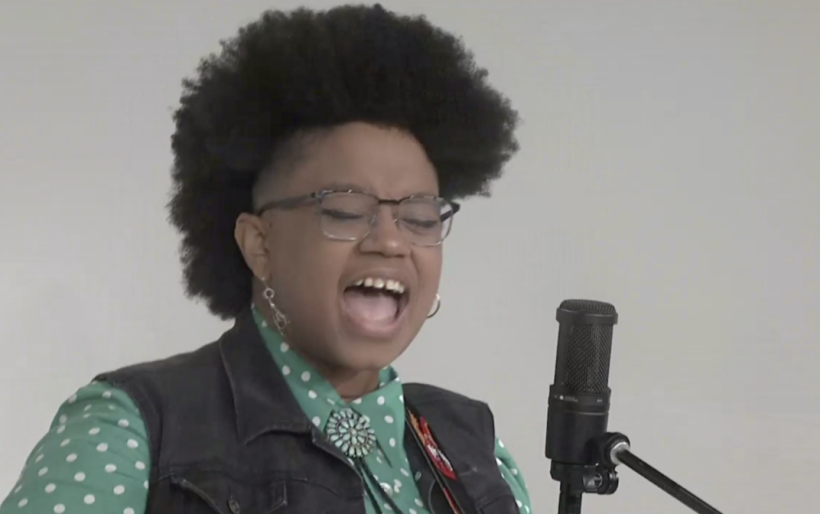 After making a big impression in the Our Native Daughters group alongside Rhiannon Giddens, Leyla McCalla, and Allison Russell, Tennessee singer-songwriter Amythyst Kiah has gotten a lot of much-deserved acclaim for her new LP Wary + Strange this year. Earlier in the summer, she brought some of the album’s songs to WXPN’s virtual Free at Noon sessions, performed live from Knoxville’s WUTK studios.

“I’m so excited for people’s excitement for this project that’s so near and dear to my heart,” Kiah said after an opening performance of “Hangover Blues.” Themes of despondency and coping showed up in “Fire Water,” which featured folky high-register fingerpicking and clever wordplay. “How many spirits does it take to lift a spirit,” she sang. “I don’t know, I don’t know / ‘Cause I got every spirit and I’m still laying here / Crying on the floor, on the floor.

Kiah started writing some of the music on Wary + Strange, including “Ballad of Lost,” in a 2009 songwriting class; she didn’t finish it, but carried it with her for a long time, ultimately getting Amy Ray of Indigo Girls to record on the album version. “I feel like I should be the one singing background vocals on her record,” Kiah said before performing it. “But she’s incredibly humble and wonderful. So try and imagine three Amy Rays singing.”

“Wild Turkey” also visits themes of alcohol, personal trauma, and not allowing your past to dictate your present and future. “I carried around that grief and pain for a long time, buried,” Kiah said. “This song was my way of finally processing it.”

Closing on her breakout single “Black Myself,” Kiah wove together feelings and observations on race in America in 2021, both in terms of continued oppression as well as the boxed-in perceptions of Black folks in the music and society in general: “I don’t pass the test of the paper bag ’cause I’m Black myself / pick a banjo up and they stare at me ’cause I’m Black myself.”

“I wrote and recorded this with Our Native Daughters,” Kiah explained, introducing the song. “I wanted to keep the conversation going about tackling and destroying systemic racism if at all possible, at some point in our lifetimes or the future generations. There’s still a lot of work to do.”

Watch the full free at noon performance below, and pick up Wary + Strangeat Bandcamp. Explore our full virtual Free at Noon archives here.