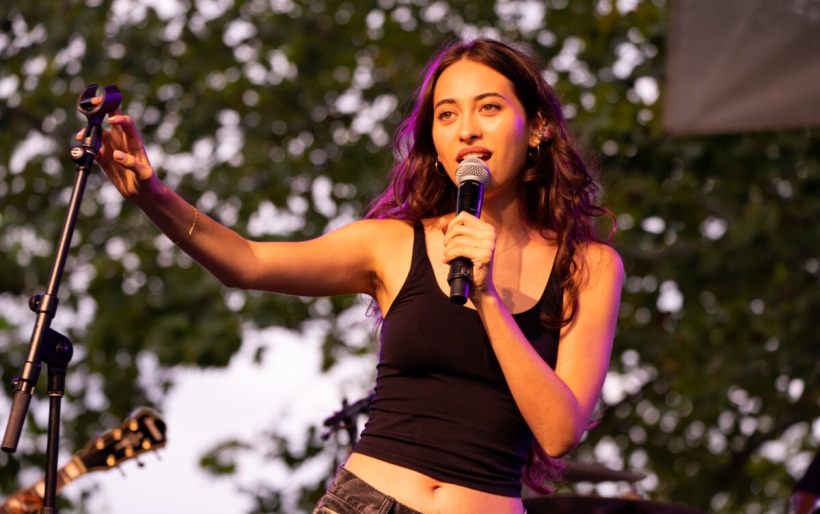 After a few technical difficulties, Sofía Valdés made her XPNFest performance worth the wait. When she finally reached the Marina stage, the crowd went crazy as she shouted, “can you hear me?” Not wasting a single second, Valdés delved right into her groovy seven-song set amidst an eruption of applause.

Valdes’ whole set was bewitching, and at some moments it seemed like she was glowing. As she danced to bubbly tracks such as “Amsterdam,” the audience was quick to sway along. Playing a mix of bossa nova and pop, she lit up the stage as the sun began to sink behind her.

Valdés’ silky vocals seemed to melt into the lush instrumentation surrounding her. Accompanied by a top-notch band, it takes a second to realize how raw her lyrics are. Over a sugary guitar riff on “Lonely,” her references to the letters she’s held onto and the crushing confession of “I’ll always go back to you” almost get lost. With a distant look on her face, it’s as if she’s accepted being permanently stuck on someone that only exists in a dream world.

These moments of striking vulnerability occur repeatedly throughout her set, most notably in the intimate anecdote she used to introduce “Little Did I Know.” The track was written after a break-up with someone who was struggling with addiction. Perched on a stool center stage, you could sense the heartbreak in her delivery. With her eyes shut, it was as if she was being pulled back into a memory of her attempts to help them.

While she has these instances of gut-wrenching emotion, her set was far from being all doom and gloom. On “Oceans Away,” a song dedicated to her little sister, the balmy riffs and breezy percussion feel like the beaches she sings about. Valdés even threw in a chilled-out cover of Gwen Stefani’s smash hit “The Sweet Escape.” Her silky voice glided over the sparkly keys in such an effortless way it was almost impossible to believe she didn’t write the song herself.

You can check out her latest EP Ventura (Extended)here, and listen back to her entire XPNFest set below.