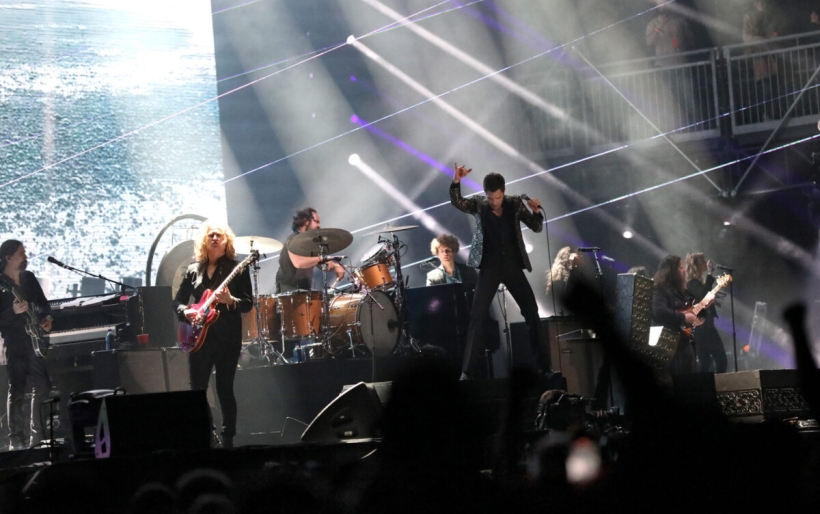 The Killers | photo by John Vettese for WXPN

Because of the rain delay, I only caught five artists on opening day of Firefly 2021. If that seemed a bit light, day two totally made up for lost ground, with double the amount of sets and probably triple the amount of photos on my SD card (many of those being the ultra-charismatic Cage The Elephant). Read on for a rundown of things heard and seen, and check out our day one coverage here.

The fantastic postmodern indie four-piece Pom Pom Squad got the day (and the Wonder Stage) to a start with a fast paced set of hooky jams from their terrific 2021 record Death of a Cheerleader. Frontperson Mia Berrin shredded, screamed, crawled out to the lip of the stage, and generally put on a dynamic and fun show. They’ll be in Philly in November opening for Nada Surf at World Cafe Live.

Los Angeles artist Duckwrth sang, rapped, jammed out with his band, and worked the Backyard Stage crowd who was psyched that it was Friday, sunny, dry, and they’d just gotten paid. His large band brought a massive sound — particularly backup singer Amber Olivia Kiner — but striking a pose at every turn, Duckwrth was clearly the star of this show.

Miami singer-songwriter Rozet took more than a minute to get started because of technical difficulties, but it was worth the wait. Her set featured dancey Brazilian percussion inspired pop, brash synth rock (centered around her keytar skills), and serene R&B. “People try to put me in a genre,” she said, pointing to her head. “My genre’s all up here.”

A Pavilion Stage DJ set by Aluna Francis of UK indie pop duo AlunaGeorge had a serious party vibe. Aluna drew on house, dancehall, reggae, and pop cuts for her mix, but the moments that got the most hands in the air were when she spun her own songs — or songs where she was featured, like Disclosure’s “White Noise” — and grabbed a mic to sing along. AlunaGeorge never really got the stateside appreciation it deserved, so it was good seeing Aluna get so much love from the decks.

With a voice that soars and songs that emotionally connect, Arlo Parks took the Wonder Stage as the sun set across the field — an apt setting for somebody who released a record called Collapsed In Sunbeams, one of 2021’s best — and proceeded to show Firefly why she won the Mercury Prize and racked up a vast amount of acclaim this past year (including being named XPN’s Artist to Watch last December). Her first U.S. festival appearance was tender, but sounded tremendous, and she returns to Philly in October for a sold-out Foundry show.

Rootsy rockers Band of Horses are festival scene vets at this point, and though it wasn’t quite clear how much of the crowd packed in at the Firefly Stage was their own or fans of Cage The Elephant and The Killers snagging an early spot, Ben Bridwell and his companions delivered. “Is There A Ghost” woke the field up from its midafternoon slumber, and BOH kept the momentum high with jams like “Casual Party” intertwining with ballads like “No One’s Gonna Love You.”

Long Island emo rockers Taking Back Sunday brought some Warped Tour energy to the Firefly Wonder Stage as night came to The Woodlands. The band is 20 years older than the wiry hardcore kids I saw at The Troc in college, but frontperson Adam Lazarra is twice the entertainer, swinging and spinning his mic cord, wrapping it around his body, gesticulating and gesturing and generally owning the stage. Their set into Cage The Elephant’s made for a complimentary pairing of ostentatious yet engaging frontpersons.

Speaking of ostentatious frontpersons, yes, the above photo is how Cage The Elephant’s Matt Shultz made his entrance onto the Firefly stage. Yes, he removed the outfit’s various layers over the course of their set, adding accessories like biker helmets and visors, all while flailing perilously close to his bandmates and their instruments. Did the sartorial gimmickry distract from the music? Folks across the field were screaming along to modern rock bangers “Ready To Let Go” and “Ain’t No Rest For The Wicked,” so I’d say no.

Amelia Meath and Nick Sanborn have upped their game tremendously since the last I saw Sylvan Esso — and their game was already strong. Songs like “HSKT” and “Kick Jump Twist” seem to go harder than ever, more recent jams like “Train” are welcome additions to the set, and Meath’s triple threat role as singer, dancer, and festival hype person working the crowd is impressive, especially considering she excels at all.

Bringing day two to a massive finale were The Killers “brought to you by way of fabulous Las Vegas, Nevada,” as Brandon Flowers said at several points. Should you ever doubt this band’s conviction or relevance, in the modern rock world or beyond, I urge you to see them live and tell me you aren’t screaming along to “Mister Brightside,” “All These Things That I’ve Done,” and “When You Were Young” with 50,000 people. Their best-known tracks might be those early career selections, but the newer songs are no slouch, and also: confetti. What a night.