Firefly On The Fly: Pacing ourselves on day three with Tame Impala, Khruangbin, Caroline Polachek and more - WXPN | Vinyl At Heart 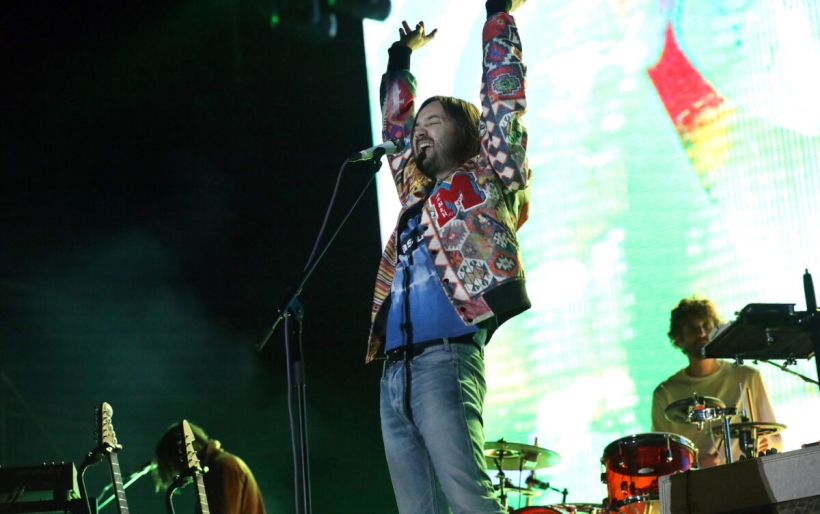 Firefly On The Fly: Pacing ourselves on day three with Tame Impala, Khruangbin, Caroline Polachek and more

Knowing that closing day at Firefly Music Festival would be a wall to wall long day, day three was taken at a consciously leisurely pace…and I still saw seven artists. From positive electropop to introspective rap and hallucinatory rock, here’s a rundown. Check out our day one coverage here and our day two coverage here.

LA’s Elohim alternated between a hard trance DJ mix and self love anthems where she took the mix and stepped out from behind the decks. An invigorating midafternoon beginning.

Genre-fluid Brooklyn artist binki made a faux pas at the open of the set, saying “What the fuck is there to do in Delaware? Is anybody actually from here?” And then the snark backfired when he realized, yeah, more than a few of the crowd were Delawareans. Luckily binki has a knack for cooly uplifting, energized indie dance that atoned for geographical slights; Dave P and the Making Time would do well to pay attention to him.

It’s truly wild that Caribou, the dual drumkit art pop band that moved in esoteric Animal Collective circles a decade and some ago is now playing to thousands in Festival tent settings. Wilder still is that they did so without changing their sound, though they did overload the circuits on the Pavillion Stage after the raging “Ravi,” calling for five-ish minutes of dead air while everything rebooted. A lot of the audience left, but when they got going again a new set of folks cycled into their place, making their vibes reach even further.

Caroline Polacheck is here for all your Kate Bush / Enya / Lorde-when-she-was-still-witchy energy needs. The New England singer / songwriter / producer dropped her new single “Bunny Is A Rider” early in the set to the delight of mega fans up front, and made the rest of her 45-minute performance a mix of dramatic gesture, moody atmosphere, and moving songcraft. She returns to the area for a Union Transfer show in November.

He may have been delayed but Roddy Ricch knows how to make an entrance. Emerging from billowing clouds of haunted house level smoke, the Compton MC dove right into his performance, alternating sexy moments like “Down Below” and with more deeply personal cuts like set opener “Every Season.”

Houston trio Khruangbin brought vibes aplenty to the Wonder Stage. For all their stoicness as performers — bassist Laura Lee grooves a bit at her mic and sometimes she and guitarist Mark Speer meet up center stage, but they mostly stay still otherwise — my god the jams. DJ Johnson’s slick beats keep a steady flow to the set, and the mix of instrumental prowess and psych-tinged postmodern kitsch just envelops you.

Speaking of enveloping, Tame Impala grabbed a hold and did not let go, from the opening notes of “One More Day.” The band has expanded since their last Firefly set, and as a result frontperson Kevin Parker seems to do less — yes, he’s focusing on his vocal performance by not having his guitar with him at all times, but it does have echoes of Liam Gallagher’s statuesque stage persona — but when the energy peaks, his pulse does kick in. And with visual aids and a terrific mix, The Slow Rush sounds positively cosmic live.