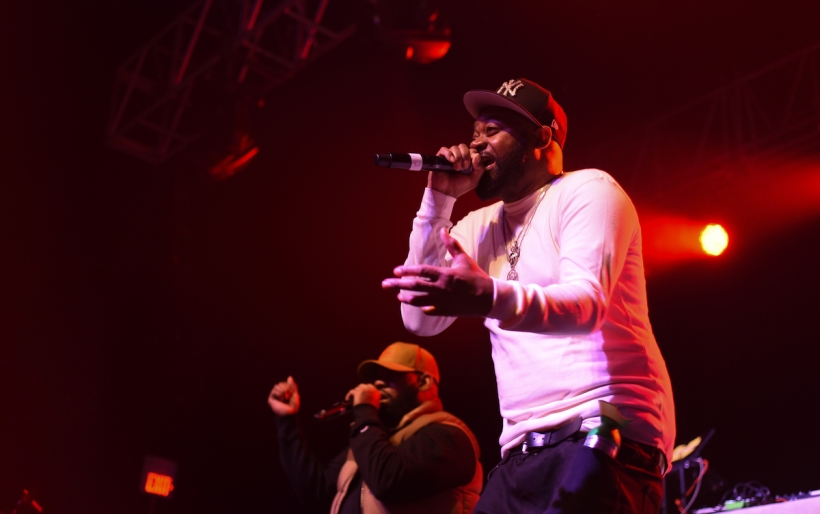 Ghostface and Raekwon | photo by Megan Matuzak for WXPN

During an interview on Drink Champs’ Podcast, veteran hip hop artist N.O.R.E. told his guests Raekwon and Ghostface Killah a story about Loud Records founder Steve Rifikind. It was about how legendary New York station Hot 97 was a rhythmic crossover format at first, but Wu-Tang records were banging so much that they called Steve to say they were going to change the whole station to hip hop for the Wu. That’s how powerful their impact was: that a radio station would change the genre of music they played because of the endless demand to hear records made by nine MCs from Staten Island.

The quality of the music made from RZA, GZA, Method Man, Raekwon, Ghostface Killah, Old Dirty Bastard, Inspectah Deck, U-God, and Masta Killa was so potent that like their late peer DMX, they never had to change their music to crossover. Whether folks grew up like them or not, the content over RZA’s sharp, dark production was too appealing to ignore. It’s been 28 years since the world was introduced to the W and to to celebrate over two decades of longevity, Ghostface Killah, Raekwon and GZA performed at the Franklin Music Hall Sunday night during their 3 Chambers Tour.

Rae’s Only Built for Cuban Lynx and GZA’s Liquid Swords albums celebrated their 25 anniversary last year in 2020, while Ghost’s Ironman album recently celebrated its 25th anniversary just last month. Enter the Wu-Tang (36 Chambers) showed that these three poets from the street of Shaolin were as deadly with a pen like swordsmen  Roronoa Zoro, Captain Yami, and Afro Samui. So Raekwon and Ghostface’s debuts along with GZA’s sophomore outing can be viewed as their own arcs of the story of Wu-Tang Clan. 26 years later, all three albums are viewed as hip hop classics, so yesterday was a night to celebrate timeless music at the Franklin Music Hall.

No matter the decade, a good DJ is needed for a good hip-hop show, and DJ Technician was more than good enough. His performance during Verzus’ The Lox vs. Dipset showed how skilled he is as a technician on turntables, and brought those skills to Philly preparing the crowd for the Wu by playing hip-hop classics while doing a sound check, along with DJ Symphony. Like many, I’ve become a big fan of Hulu’s Wu-Tang American Saga series, and looking at the crowd made me think if they were the same kids in the 90s who got into the Wu because of their college radio station, a platform that played a big role in their come up. If so they all came prepared to hear rugged slick bars from the 90s in their own killer bee uniforms. There were even kids and teenagers in attendance who couldn’t have  possibly grew up listening to their music, however it once again proved the truth in the late ODB’s statement: Wu-Tang is for the children.

The show started off with the lyrical genius known as the GZA, and like water he was calm on stage while letting the impact of his words hit the crowd like a tsunami. Then came the gritty and jiggy chef and swift assassin, Ghostface Killah and Raekwon, wooing the crowd with street talk drenched in their Wu-tang slang. I must say that it was very impressive to see all three of them were able to rap the lyrics they wrote 26 years ago with just the instrumentals, showing that a good performance means knowing the lyrics to the songs you wrote. They controlled the audience with singles such as “Ice Cream,”  “Shadow Boxing,” and “Daytona 500,”  as well as b-side cuts like “Heaven & Hell” “4th Chamber,” and “Fish.”  They even performed songs from the classic that started it all, Enter the Wu-Tang (36 Chambers), such as  “C.R.E.A.M.,” “Shame on a N****,” and even brought a fan from the crowd to perform Inspectah Deck’s verse on “Protect Ya Neck.”

Philly showed mad love to Raekwon, GZA, and Ghostface Killah, so much that at moments the crowd left the three members of the Wu-Tang Clan speechless when they sang their lyrics word for word. Sunday night was not only a night to honor immortal music for hip hop nerds like myself, but it was also a reminder that after more than two decades Wu-Tang Clan still ain’t nothing to f*** with.