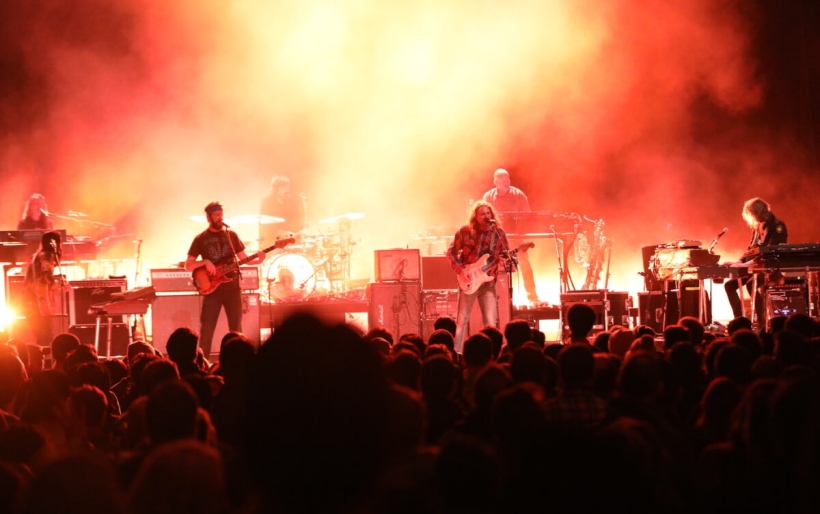 The War on Drugs take flight at The Met Philly homecoming

“We wouldn’t miss this for the world,” Adam Granduciel told The Met Philly last night, and it truly felt reassuring. In the week leading up to The War On Drugs‘ first hometown concert in over two years, uncertainty was high. The Omicron surge is still very much a thing, the band had to postpone several of their first live shows in support of last year’s acclaimed I Don’t Live Here Anymore, and leading up to their first of two nights at The Met, a sense of will-they-or-won’t-they hung in the air.

Thankfully, they did. And it sounded sublime.

For this tour, The War on Drugs have expanded to seven-piece formation — West Philly music vet Eliza Hardy Jones joined in on synthesizer, vocals, and auxiliary percussion along with regulars Robbie Bennett on keys, Jon Natchez on saxophone and synth, Anthony LaMarca on guitar, and founding members Dave Hartley on bass and Charlie Hall on drums. The ensemble created a tower of sound to neatly replicate the layers and nuance of the Drugs’ recorded work, but it never felt overly busy. Even on the racing “An Ocean In Between The Waves” — always a set highlight and usually the gateway between a gentle opening and the propulsive core, the “now it’s on” moment — all the players were active, but none felt frivolous.

The soaring arrangements and 80s rock worship of I Don’t Live Here Anymore sounded great in this setting. On the one hand, the new songs felt on record (and still feel in concert) like teenage anthems for fortysomethings; on the other hand, so what? They’re moving, they’re radiant, and details like the keyboard-and-guitar interplay on “Victim” and the dynamic journey of “Harmonia’s Dream” (easily the best-sounding of the new record’s songs) pack a powerful punch.

The band’s back-catalog simmered as usual; “Red Eyes” from Lost In The Dream was electrifying, and in the general admission pit, you could spot one fan dancing and waving their arms while still wearing a light-up bracelet from the Kacey Musgraves concert the night before. (Glad we’re all on the same concert schedule.) A duo of songs from 2011’s Slave Ambient was a treat, and “Come To The City” shook the rafters. Some moments lulled ever-so-slightly — a downbeat new arrangement of “Eyes To The Wind,” while interesting, always seemed like it was about to blast off but never quite got there — but as always, “Under The Pressure” and Hall’s legendary beat-drop within were exhilarating.

As the night wound down, Granduciel seemed…apologetic? “I’ve been sick, and it took a lot for me to come out here,” he said before going into the concluding “Occasional Rain.” “We’re going to take it easy tonight so we can do it again tomorrow night.” And sure, maybe there was no encore (though encores are kind of played out). Maybe the setlist was one song shorter than the initial handful of dates got (though perhaps tighter = better?). But it wasn’t as though The War on Drugs hadn’t just gotten out there and sounded remarkable for an hour and 50 minutes straight. Adam, you have nothing to apologize for. See you tonight.