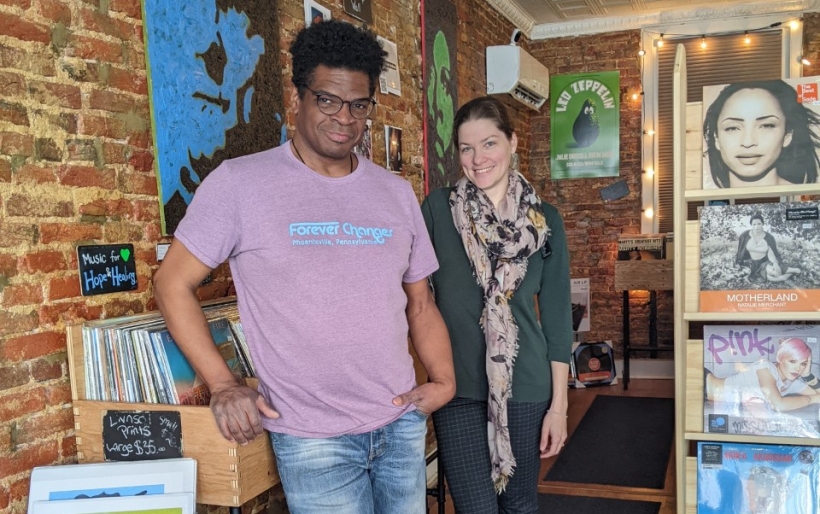 When Shawn Cephas’ father passed away in the fall of 1997, the grief of this loss was tied up with other feelings. Shawn’s dad, James Cephas (aka King James) owned record stores in the city. In 1967, James opened King James Sound Center on 52nd Street in West Philly and would later open another store on 52nd and Girard, followed by another in North Philly. When James passed, Shawn was charged with the task of managing the legacy that his father left behind. Speaking with The Key for this story, Cephas explains the events that led to him closing up his father’s shops.

“When my dad died, it was put on me at 26 years old to basically deal with whatever needed to be dealt with for the businesses. He was sick for several years and not really taking care of the business side of things, so we had to liquidate and close. The frustrating thing was that I was behind the counter of a record store — which I loved and it’s where I grew up — but it was to end things.”

With the King James shops closed forever, Shawn still felt a deep need to be around records, so he took a job at a Sam Goody in Ardmore. As the dawn of the millennium brought increased access to music via digital downloading, physical music media — and by extension, the record shops that sold them — began to fall out of favor. By 2004, the music retail giant HMV had closed all of its stores in the U.S., and Tower Records entered bankruptcy the same year. Not only did this changing economic reality devastate music retail’s big fish, a number of smaller, independently owned brick and mortar record stores closed around the world. Cephas recalls the years following the collapse of the physical music retail business and explained how when faced with shrinking demographics in ownership and on both sides of the counter, the culture of record shops morphed into an insular, white male boy’s club.

“Growing up, a record store was where you got music,” Cephas says. “It wasn’t a clique, it wasn’t a club. It was where anyone — mom, dad, kids, whatever color or orientation — had to go to this place to get music, so it naturally creates community. So once this whole little niche group that was still buying physical music and if you go to any of the local record stores in the area, it’s white dudes. So as we move into the past five years or so, and vinyl’s got this comeback kinda thing, I was like ‘It can’t be a club anymore. It can’t be a place where Women or someone who doesn’t identify as a Cis male doesn’t feel unwelcome or uncomforatable.’ That was what really pushed me to be like ‘I want to do this [run a record store] again.’”

With this desire to create an egalitarian place where folks can come, hang out and buy records, Shawn began to hatch a plot to follow in his father’s footsteps and open his own record store in 2018. Lacking a physical storefront but armed with a deep knowledge of music and the business of vinyl, Shawn began hosting pop-ups to get back into the swing of selling records. Living in Phoenixville with his wife Anna, Shawn had his eye on a storefront space that would be the perfect setting to realize his dream.

“I envisioned a certain storefront here in Phoenixville, but something was there. Once the [COVID] lockdowns happened and everything reopened, that coffee house didn’t reopen. So exactly three years later, the storefront that I had envisioned was open. I just pulled the trigger.”

Named after Arthur Lee and Love’s classic 1967 psychedelic folk-rock album, Forever Changes, Cephas’ gorgeous storefront space is adorned with art on the walls and expresses the kind of warmth, color and accessibility that is missing from many record stores. When the subject of the store’s inventory comes up, Cephas discusses Forever Changes’ selection of new and old vinyl records with pride.

“I want it to be a place where somebody digs in and finds a King Tubby record. I love my international section, there’s tons of African music in there, Ravi Shankar. My soul and blues section, I have to take pride in that because that was my dad’s thing. For me personally, my air and water is jazz. I have a really solid jazz section.”

In keeping with Chepas’ vision of Forever Changes as a record store with a unique identity and purpose, the store has also hosted DJs and musicians for live performances in the store. Video of the performances are shot by interns from Phoenixville High School. This practice of enlivening the space with musicians and members of the community is another lesson that Shawn got from his dad back in the day.

“One of my favorite memories of my dad’s store were the people coming through,” Cephas says. “It was the coolest thing just to have musicians hanging out at the record store. The plan is to have in store performances that are professionally shot and put onto our YouTube channel, Live at Forever Changes.”

25 years after he was forced to come to terms with the legacy that his father had built, Shawn Cephas is writing a new chapter with Forever Changes. With an intentional focus on building community through music, Shawn is creating something in Phoenixville, that is at its heart, not too far removed what his dad built in Philly so many decades ago.

Forever Changes is located at 28 S. Main Street in Phoenixville; to learn more, visit their website at foreverchangesrecords.com.