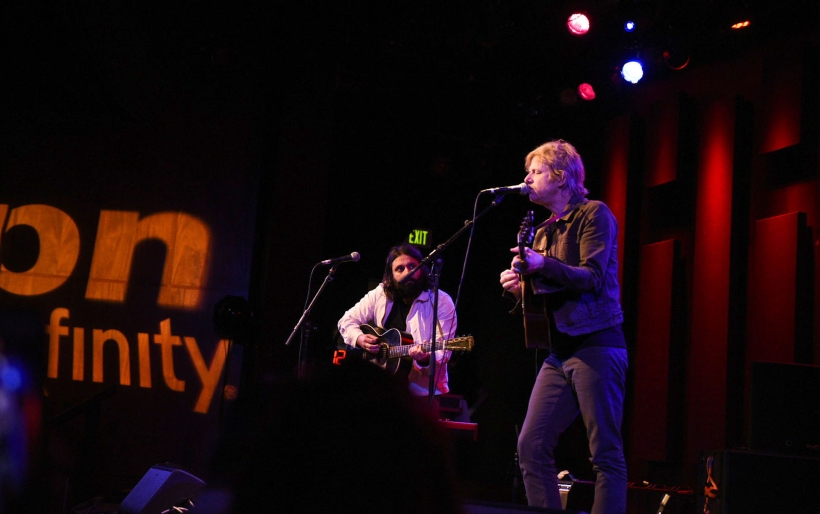 “I’m pretty sure this song was never meant to be played acoustically,” Britt Daniel of Spoon said before playing “The Hardest Cut.” “But we’ll give it a shot.”

Over the past thirty years, revered Austinites Spoon have proven to be the steadiest and most reliable producers of indie rock bops this side of Pavement. Their music is gripping, but never alienating; they vary up their style from release to release, but never so much that they destroy what they’ve built. Between endlessly sexy grooves and Britt Daniel’s vivid lyrical wordplay, Spoon’s always got something to get you engaged, and the fact that their Free at Noon set featured songs from three different albums released at three different junctures of their career, and yet it flowed seamlessly, is a testament to their constancy.

“Do You” from 2014’s They Want My Soul led the pack, diving right into “Wild” from the new Lucifer on the Sofa. Both songs are rockers that still rocked even without the drums and bass and electric instrumentation. But with “I Summon You” from 2005’s Gimmie Fiction, things began to shift, and Fischel’s flamenco-informed tremolo picking on his hollowbody guitar took the music in an unexpected direction.

“I’m pretty sure this song was never meant to be played acoustically,” Daniel said as the duo headed into Lucifer single “The Hardest Cut.” “But we’ll give it a shot.”

It worked tremendously well, and for the set’s second half, Fischel switched to keyboard, lending a sublime 70s AOR vibe to “My Babe.” A dreamy cover of David Bowie’s “I Can’t Give Everything Away,” and a vulnerable, bare-bones rendition of Soul‘s “Inside Out” closed the set. Without that aforementioned sexy groove on the latter, or the synthesizer fireworks of the song’s studio rendition, the sensitivity of Daniels’ words comes to the forefront, showing that reliable and consistent as they may be, Spoon is still full of surprises.

Lucifer on the Sofa is out now, via Matador Records; Spoon plays a headlining show tonight at The Fillmore Philadelphia, tickets and info can be found at the WXPN Concerts and Events page.