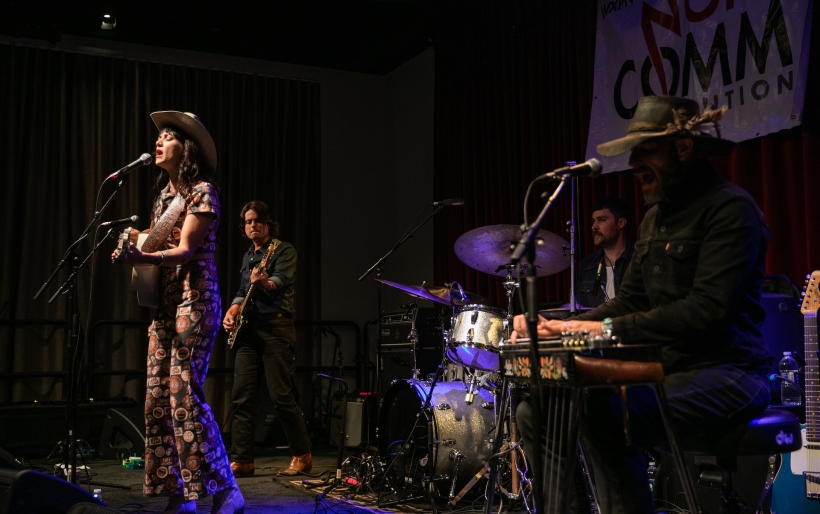 Nikki Lane’s NON-COMM set didn’t give away too many details about her first record in five years — not even the title — but its songs were a massive amount of fun in a live setting.

The last time we heard from singer-songwriter Nikki Lane, it was 2017 and she’d released her third album album Highway Queen. Five years, a couple moves, and a collab with Lana Del Rey later (Lane co-wrote “Breaking Up Slowly” from last year’s Chemtrails Over The Country Club), and Lane is back with a new band and an album on the way later this year.

Lane’s NON-COMM set didn’t give away too many details about the record — not even the title of their excellent rip-roaring set opening song — but we do know that Josh Homme of Queens of the Stone Age produced the album, and that its music is badass in a live setting, a lively bend of Cali country crossed with Nashville power-pop. Or maybe that’s the other way around.

“I like to talk and complain for a living,” Lane laughingly told the crowd. “I made an entire career out of spite, but I do write an occasional love song.” This particular love song, she noted, was not one where she was the protagonist. “Good Enough” was inspired by her grandparents’ 65-year relationship, she said, and how there can be beauty and freedom in just being good enough for one person.

The other two songs in Lane’s short set were similar slice of life observations — the Blackhearts style 80s rock of “Born Tough” was about being raised by a strong mother who taught her to use power tools, a skill she and some friends put into action building a stage not long ago. And the character sketch of “Denim and Diamonds” was another jagged jam that liberally mixed Nashville twang with retro pop hooks.

Lane begins a late spring / early summer tour on June 2nd at Schellraiser Music Fest, and will be revealing more about her new record in the coming weeks; keep an eye on her website for details, and listen to her NON-COMM set below.