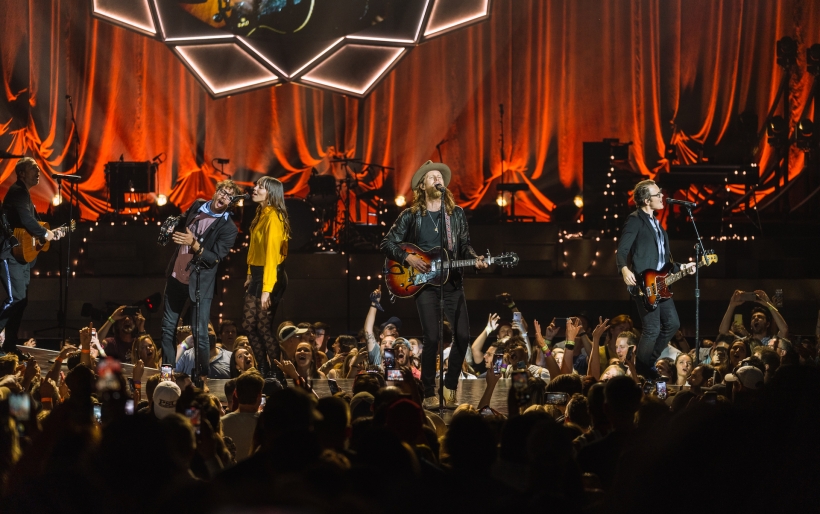 The Lumineers | photo by Dylan Eddinger for WXPN

The Colorado arena-folkers brought a soaring night of music to the Camden Waterfront on Friday night.

Just over the Ben Franklin Bridge in Camden, New Jersey, Wesley Shultz of The Lumineers united the sold-out audience with a sweet sentiment: that despite the lack of in-person interactions with friends and family throughout the global pandemic, all the events in life worth celebrating — like birthdays, graduations, weddings, and even mourning — still occurred for all, but almost felt unreal without sharing the experiences with those loved ones. Shultz and the band humbly thanked everyone for celebrating their album releases III and BRIGHTSIDE, and for being part of their lives through all the love, laughs, and tears.

Supporting the Lumineers through their US tour, Ohio folky jam band Caamp was greeted by a great number of singing-along fans to catch their opening set. Caamp performed radio hits “Officer of Love” and “Peach Fuzz” — which ranked #39 on WXPN’s Top 100 Songs of 2019 — and their 2022 single “Believe” off the upcoming Lavender Days, where they surprised many in the audience by seamlessly transitioning into Black Sabbath’s “War Pigs” to close their set. Lead singer and guitarist Taylor Meier’s vocals paired with the soft but upbeat sound of bassist Matt Vinson and keyboardist Joseph Kavalec.

Another surprising element of the evening was The Lumineers’ walk-out song. Instead of taking the stage to something on-theme to someone like maybe Tom Petty or Fleetwood Mac, the lights came on and fans cheered the band onto the stage with Rihanna’s “Desperado” before kicking off the night with the title track of their 2022 album BRIGHTSIDE. Rolling off the applause, Shutlz made his way to a smaller stage in the middle of the pit area for “Cleopatra” off their 2016 album and was later joined by the rest of the band, minus Jason Fraites on drums, for “Ho-Hey” off their self-titled 2013 Grammy-nominated self-titled debut. 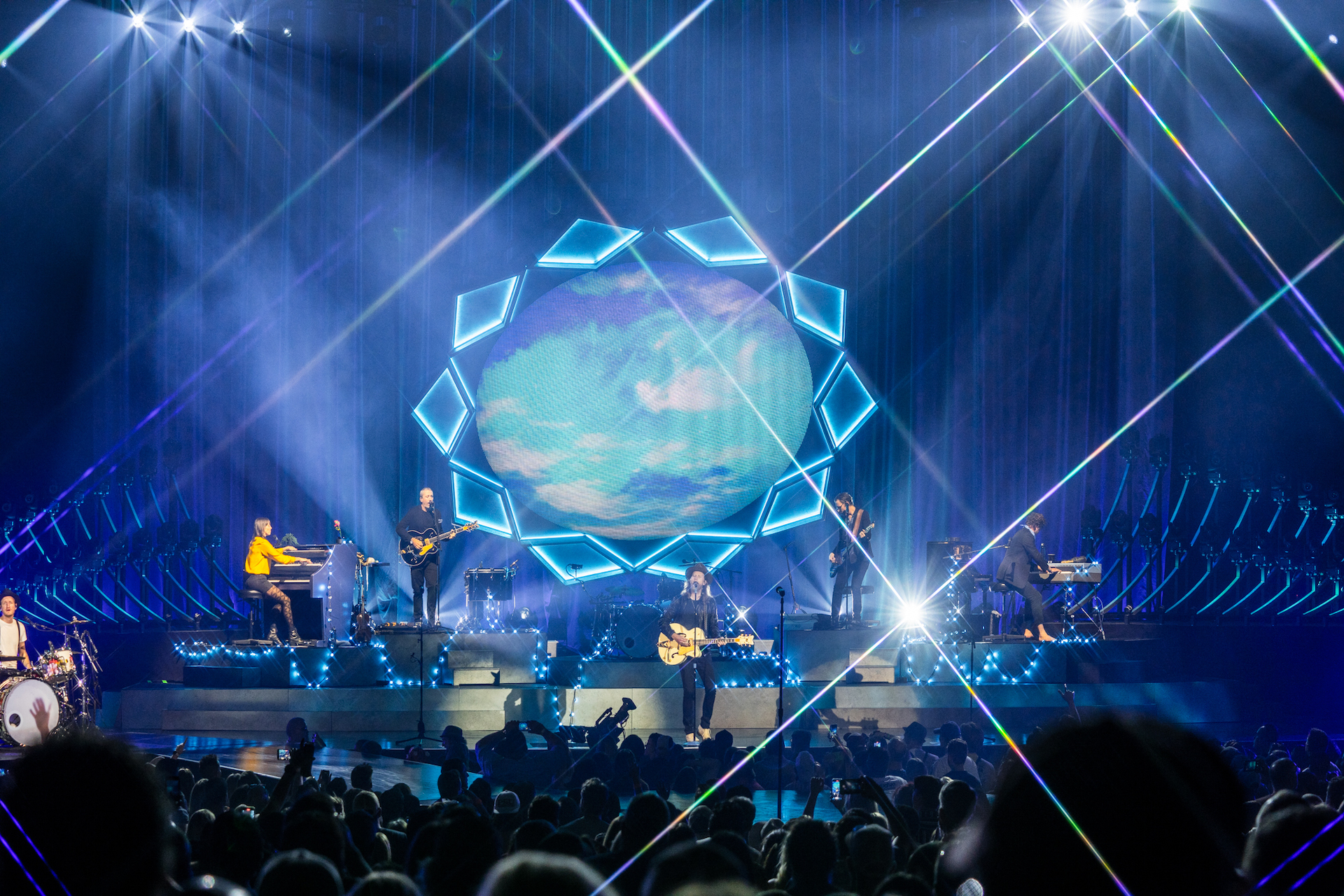 The Lumineers | photo by Dylan Eddinger for WXPN

Throughout the evening, Shultz continuously thanked The Lumineers’ fans and friends for joining them on the tour. He mentioned that he had been making music since 2004 and that the band has gone from playing North Star Bar in Saint Paul, Minnesota with 26 people to an amazing sold-out night in Camden, NJ, with 26,000 people.  Spotlights shined down on just Shultz and Fraites at the small pit stage to perform “Slow It Down” with just guitar, kickdrum and tambourine, giving Shultz the complete control of the amphitheater with the lyrics of lovers drifting apart. Members from Caamp then joined with the rest of the band and performed ”It Wasn’t Easy to Be Happy For You.”

Everything seemed to turn into a big party after that moment. Shultz dropped into the pit with the crowd, followed by camera crew to sing out the final chorus to “NEVER REALLY MINE” with screaming fans reaching for a fist bump or hug. Pianist and “player of many instruments,” as introduced by Shultz, Stelth Ulvang ran and danced from instrument to instrument barefoot with the purest expression of excitement. At one point Uvlang stood and danced on top of the piano, clapping along with fans to the beat before jumping off back to his post on the ivories, where they then transitioned into The Rolling Stones’ “You Can’t Always Get What You Want.” And what’s a Camden show without a little Springsteen? All the dads in the venue yelled out their finest “Bruuuuuuce” call as the band played their version of WXPN listener voted #1 of the 2020 best songs of all time, “Thunder Road.”

The set closed with “Big Parade” before a hefty five-song encore where they played “Donna” “Submarines” and then “BIRTHDAY” and “REMINGTON” into “REPRISE” outro tracks on the BRIGHTSIDE album. Everyone came together for one last sing-along for “Stubborn Love” with the lyrics “Keep your head up, keep your love” echoing from the crowd in solidarity as the final message is that we are able to be together again with friends, loved ones, and even strangers at a concert to lift us through the tough times.

Check out photos from the concert below. The Lumineers continue their USA tour in Cincinnati, Ohio Tuesday night and will be back in Forrest Hills Stadium in New York for two nights 6/17 and 6/18.