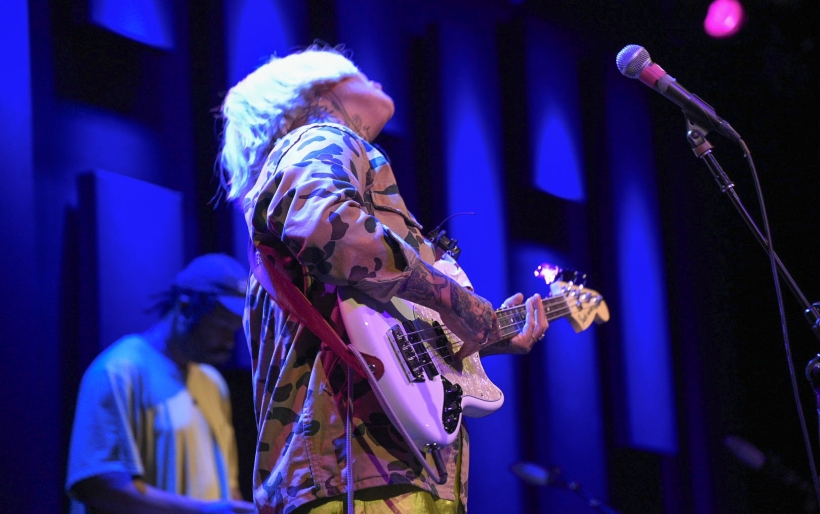 Chicago trio Dehd brings the house down for Free at Noon

Free at Noon headliner Dehd celebrated being WXPN’s June Artist to Watch with a stellar performance.

Chicago power trio Dehd blew the roof off 3025 Walnut Street for the headlining set of Friday’s Free at Noon double header. Eric McGrady’s drum set-up of snare, tom, and drum pad gave their performance a unique, minimal, 80s-influenced sound. But they were not playing Peter Gabriel songs for half an hour. Dehd jammed reverb-soaked guitars and driving bass to make a blend of surf rock, indie rock, and post punk.

Vocalists Emily Kempf and Jason Balla took command on the stage. Stomping around to the beat of McGrady’s tom and throwing in occasional ballerina-like moves there was not an inch of the wooden floors not touched. Kempf has such an amazing voice it is hard to pinpoint who she can be compared to, but to make some sort of reference point it has an odd Springsteen and Cyndi Lauper quality to it (in the best way possible).

Their performance of “Bad Love” showed off Kempf’s voice and the range in tones they are able to create, and the next song “Window” again showed a new side of their voice. It was gritty and raw, both Kempf and Balla had a great performance today.

“Loner” had McGrady triggering a variety of sounds on the drum pad which provided the group with a poppy tune about embracing being a loner and being your own biggest fan and supporter. In an interview with Atwood Magazine, Kempf said “The song is about not wanting to be obsessed with attachments to people, whether it be romantic or any sort of attachment to other humans…I’m more referencing the unhealthy attachment to having my identity wrapped up with a partner or having my identity wrapped up with a best friend or having one person be a sole source of strength. The inability to be alone and be okay.”

Dehd’s fourth LP Blues Skies is out now on Fat Possum Recordings and the group will be back in Philadelphia on October 22 at the Fillmore. Listen to their performance and see photos below.