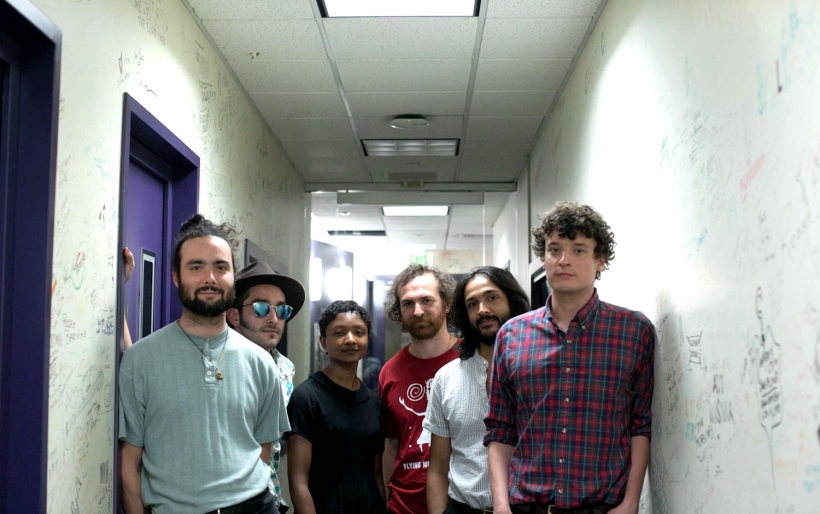 It’s kind of perfect: there’s definite influence from gospel and American folk, filtered through a psychedelic prism. There’s the ramshackle grit of a band playing in a confined space at home, maxing out the volume. There’s also heartfelt and heady lyrics from frontperson Sam Perduta, who muses poetically on life and death, on faith and fear of the unknown. The band is a mix of existential dread, and enveloping warmth — to say nothing of great tunes.

Perduta founded the project in his native Connecticut, and brought the project with him when he relocated to Philadelphia in 2016. (He works a day job in the literature department of the Parkway Central branch of the Free Library of Philadelphia.) Immersed in the Germantown music community, he began collaborating with a rotating cast of players; for this session, he’s joined by Reese Florence on guitar and vocals; Erik Kramer on drums and vocals; Keaton Thandi on keys, flute and vocals; Josh Kirwin on bass; and Will Currier III on pedal steel.

In 2021, Elison Jackson released their latest outing, a forthright collection called Good Deeds we hear three songs from it in the band’s Key Studio Sessions performance — the title track, its flipside “Evil Deeds,” and the opening “Trashman,” which seems to make a subliminal nod to Curtis Mayfield’s “People Get Ready” on the opening guitar riff. We also hear one of the band’s oldest tunes, “Ghost F*cker,” which dates back to 2013 and is one of the first things Elison Jackson released upon moving to the city in 2016.

Watch below, and catch Elison Jackson live tonight at Johnny Brenda’s, where they’ll wrap up their June tour; tickets and more information can be found at the WXPN Concert Calendar.