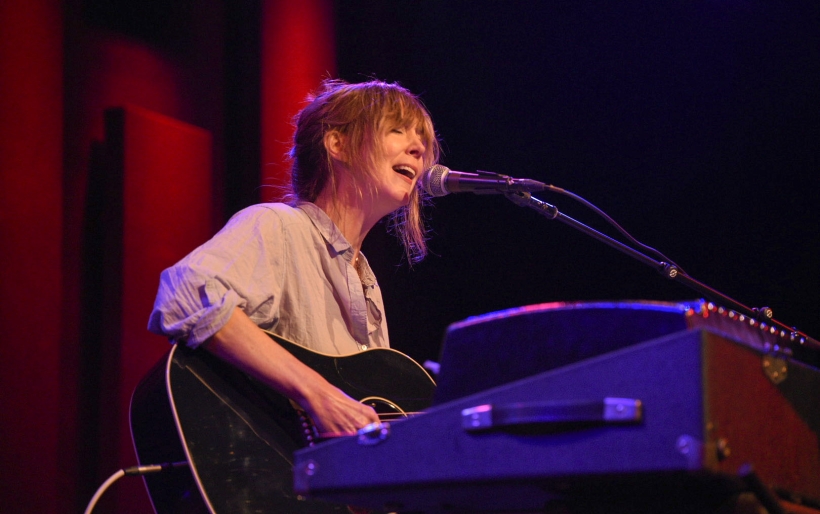 When a fan in today’s packed house Free at Noon performance from Beth Orton shouted “I Love You,” the English singer-songwriter jovially responded “Love you too, dudes!”  Orton thanked fans for sticking with her, noting that it had been a while, and explaining “I popped a couple kids out, wrote a few songs, and here we are again.”

Orton’s seventh studio album, Weather Alive, is out on September 23rd via Partisan Records, and she showcased a couple songs from it in today’s eight-song performance: after a quietly building open, “Lonely” was the first new song to land in the set, and with a warm and urgent Rhodes keyboard performance, it made a formidable impact as Orton sang fervently of isolation and how “no one likes my company” except the person the song addresses. “Friday Night” was a slow, but more optimistic in tone, again delivered on keys.

It was an interesting choice of Orton to use the Rhodes on her new material and an acoustic guitar on her back catalog faves, but the crowd was receptive to both. “She Cries Your Name” was a highlight from her 1996 debut Trailer Park; the breezy “Concrete Sky” dated to 2002’s Daybreaker. The remaining half of the set came from Orton’s breakout outing, 1999’s Central Reservation, from the soft and lilting “Sweetest Decline” that opened the set to the deep cut “Pass In Time,” the iconic “Stolen Car,” and the title track, which provided comfort like a warm blanket.

Listen to Orton’s performance in full below, and check out a photo gallery; Weather Alive can be pre-ordered here, and though the first leg of her tour is exclusively UK dates, keep your eyes peeled for news of a North American tour.