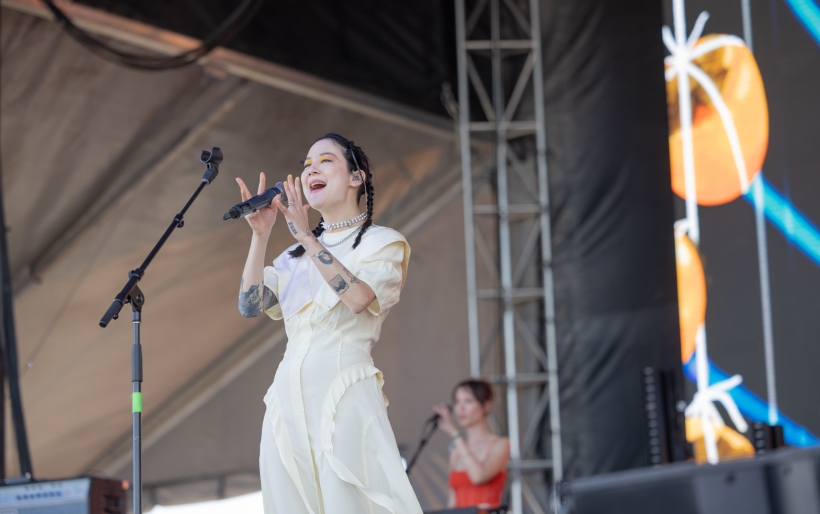 It’s the busiest week of the year so far on the Philly concert scene.

We know, we know. Our jaws are on the floor as well. But if you think the below rundown of concert picks is a massive and mildly daunting list, you should see all the amazing stuff happening in our area this week that we didn’t mention…from Maria Muldaur to Toro Y Moi! Peruse full concert listings at the Concerts and Events page of our website, where you’ll also find tickets and more info on the shows below: 25 concerts to see in the next seven days, all around Philly.

The archetypal “songwriter’s songwriter” returned last year with his latest collection, Downhill From Everywhere, a contemplative set that found Jackson Browne addressing a range of issues like immigration in the United States and concerns around the environment. His tour behind it comes to Philly tonight at The Mann. // 6:30 p.m., $40 – $155, AA

Philly folksinger Brittany Ann Tranbaugh returned to the scene this year with Quarter-Life Crisis Haircut, a lively yet intimate collection of songs and her first release in over a decade. After performing on The Key Studio Sessions last week, Tranbaugh headlines City Winery Philadelphia tonight. // 8 p.m., $15, 21+

Poppy Philly indie four-piece gloss makes witty and whimsical bops decked in neon colors and a thrifted wardrobe. It’s delightful, and on the Are You Okay? EP from earlier this year, it can be quite emotive as well. Dabbling in 80s sounds as much as jazz fusion inspired arrangements, Gloss are kindred spirits of Brooklyn’s MICHELLE, and they’ll start the week off with a Kung Fu Necktie gig tonight. // 8:00 p.m., $15, AA

Sunday 7/17: Justmadnice at The Grape Room

Dynamic and enthralling singer-songwriter Alex Farr, aka Justmadnice, has been stretching their wings of late, most recently appearing all over Moor Mother’s stellar new album JAZZ CODES. Thankfully their own music is still a prime focus, and Justmadnice plays their first Philly headliner in a minute tonight at The Grape Room. // 8 p.m., $10, 21+

The Oval on the Parkway continues to be a reliable spot to catch free local music, and tonight, singer-songwriter Zeek Burse sets off the week with eclectic rock and soul energy and a his commanding stage presence. // 7:30 p.m., free, AA

New York singer-songwriter and sonic visionary Cassandra Jenkins received a heaping of praise for her most recent album An Overview On Phenomenal Nature. It was one of WXPN’s Best Albums of 2021, and Julian Booker called it “a document that invites us all to overcome our troubles together, so long as we leave room for grace.” On Monday night, Jenkins trips down to Philly for a headlining performance at Johnny Brenda’s. Keep an eye out in her band, as well; word is Jill Ryan of Great Time is joining Jenkins on flute and saxophone. // 8 p.m., $20, 21+

From hits like 2004’s “Forever, For Aways, For Love” and 1990’s “Baby Don’t Cry” to an eclectic assortment of collaborations with artists like Robert Glasper to Anderson .Paak, Lalah Hathaway has spent her 30 year career becoming an essential voice in music. She plays a series of intimate shows this week at City Winery, beginning Tuesday. // 6 p.m. and 9:30 p.m., $55 – $78, 21+

Tuesday 7/19: Phish at The Mann Center

It’s summer, and that means Phish season. The perennial jam band is playing two nights at The Mann Center for the performing arts this week, beginning Tuesday. Tickets are getting tight, so don’t miss out. // 6 p.m., $178, AA

Philly indie faves Pine Barons just released a project with somewhat obscure origins — a full-album tribute to cult fave Tokyo alternative rock band Fishmans. It’s a dazzling collection of songs and sound but their show at Liberty Point this Tuesday night will devote equal time to celebrating their 2020 album Mirage On The Meadow, which the band is finally getting to play live. // 7 p.m., $15, AA

From the midwest to the Northeast, Cleveland-rooted skate punk four-piece Signals Midwest returned this year from their geographically scattered home bases for DENT, their first album in six years. Centered around the songwriting of now-Philadelphian Maxwell Stern, the record is terrific collection of anthemic bruisers taking deep dives into friendship and family, creative and personal setbacks, and how to age gracefully. The band is on a summer tour in support of it, and plays Silk City on Tuesday with Virginia’s Downhaul and Philly’s Five Hundred Bucks. // 7 p.m., $15, 21+

Signals Midwest - I Used To Draw

L.A. indie psychedelic four-piece Warpaint is back after six years with a new record called Radiate Like This. The album was praised by NME for its joy and playfulness, and the band plays tonight at Brooklyn Bowl Philly. // 8 p.m., $32, 21+

Trippy Athens, Georgia outfit Elf Power makes their first of two regional stops this week at Millersville’s Phantom Power. (They’re also at Johnny Brenda’s on the 25th). The self-titled fourteenth studio album from these Elephant Six affiliates is out in September. // 7 p.m., $15, 21+

California’s Brett Dennen has spent two decades building his rep on the singer-songwriter scene; his warm and whimsical songs dazzled at XPoNential Music Festival a few years back, and he returns to the region this Wednesday for a Musikfest Cafe gig in support of his 2021 album See The World. // 7 p.m., $29, 21+

Thursday 7/21: The Linda Lindas at The Foundry

(UPDATE: The Linda Lindas have postponed their Philly date due to a positive COVID test in the band’s camp. Rescheduling details coming soon.) California punk breakouts The Linda Lindas scored a viral hit last year with “Racist, Sexist Boy,” and were promptly signed by Epitaph Records; their first North American tour brings them to Philly this Thursday for a show at The Foundry of The Fillmore Philly. Keys-forward D.C. four-piece Bacchae opens. // 8 p.m., $20, 21+

The Linda Lindas - Growing Up

Friday 7/22: Clairo at The Fillmore

Sling, the second studio album from New England producer and singer-songwriter Clairo, has been out for just over a year and still sounds fresh as it did when it landed. Moving away from the synth pop that defined 2019’s Immunity, it is warm and analog in tone, jazzily complex in its instrumental arrangements, and full of honesty and intimacy. Initially set for the spring but delayed because of COVID, Clairo’s Fillmore Philly headliner is finally taking place this Friday. // 8 p.m., $53.50, AA

No, not the most recent folk revival. Not the previous one that brought us The Lumineers. Think back to the turn-of-the-millennium era and its post-Wilco Americana boom that spawned The Avett Brothers, Langhorne Slim, Nickel Creek, and yes, Charlottesville four-piece The Hackensaw Boys. The latter’s summer tour makes a stop in Central PA Friday night to bring a night of high-energy feel-good string band music to Tellus360; the Boys’ most recent project, A Fireproof House of Sunshine, was released in 2019. // 7 p.m., $15, 21+

Melbourne pop-rockers Camp Cope are in the States to share their new coming-of-age themed record, Running with the Hurricane. With Philly singer-songwriter Petal opening their Philly show at Union Transfer, before they join Lucy Dacus on other dates, the tour is sure to be a memorable one. // $26, 7:00 p.m., AA

Camp Cope - Running With The Hurricane

Raw and honest songwriter Harmony Woods has been a prominent figure in the local music scene since 2016, and is not to be missed at the large-capacity DIY venue Ukie Club. Their most recent album Graceful Rage was released in 2021; revisit our interview with Harmony Woods frontperson Sofia Verbilla about the album here. // $15, 7:30 p.m., AA

Launderette Records, a small but stylishly-curated record store on historic Richmond St, is a surprisingly intimate setting for Brooklyn indie rocker Maneka. Pile in to the one-room storefront to hear his latest Dark Matters, an exploration of America’s dark past — and present — of racial injustice. // $10, 7:00 p.m., AA

(UPDATE: This concert has been cancelled due to COVID; Don McCloskey will return to Ardmore Music Hall on October 14th.) Don McCloskey’s album release show at Ardmore Music Hall will be a joyous homecoming for the songwriter, who grew up going to the venue when it was still called Brownie’s 23 East (the Ardmore mainstay was renamed in 2013). McCloskey brings his 8-piece band for this special homecoming, as well as star openers, Chris Kasper and Calder Allen. // $18, 7:30 p.m., 21+

Philadelphians need not be told to attend a Japanese Breakfast concert anymore; we knew how great the band was before the rest of the world found out. But here at XPN, we’d be remiss not to include JBrekkie’s Saturday show at the Dell Music Center on our list of concert picks, especially because of fellow headliners indie favorites Yo La Tengo and songwriter Cate Le Bon. AND because the show benefits Eagles alum Connor Barwin’s Make The World Better Foundation, a community-minded nonprofit. // $40 – 75, 6:30 p.m., AA

Looking for a way to spend a lovely Saturday outdoors? The kind of afternoon best enjoyed with a picnic blanket and a craft brew? We recommend this local festival benefitting the Friends of the Delaware Canal at Tinicum Park in Erwinna. Music goes all day, from 11 am into the early evening, with cajun-flavored folk circuit regulars Boris Garcia headlining. // $25, 11 a.m., AA

Beach House’s expansive 18-track new album Once Twice Melody gives fans so much more to enjoy from the beloved dream-pop duo. Hear the new songs live for the first time in Philadelphia at the gorgeous and lofty Met Philly. // $44 – 70, 8:00 p.m., AA

Vibraphonist and composer Nikara Warren is a musical force, blending jazz, hip-hop and Caribbean rhythms. Her new album, Black Wall Street, meditates on the neighborhood of the same name in Tulsa, OK that was razed in the 1921 race massacre. Hear songs from the powerful new album live for a transformative evening in the Lounge at WCL. // $20, 8:30 p.m., AA