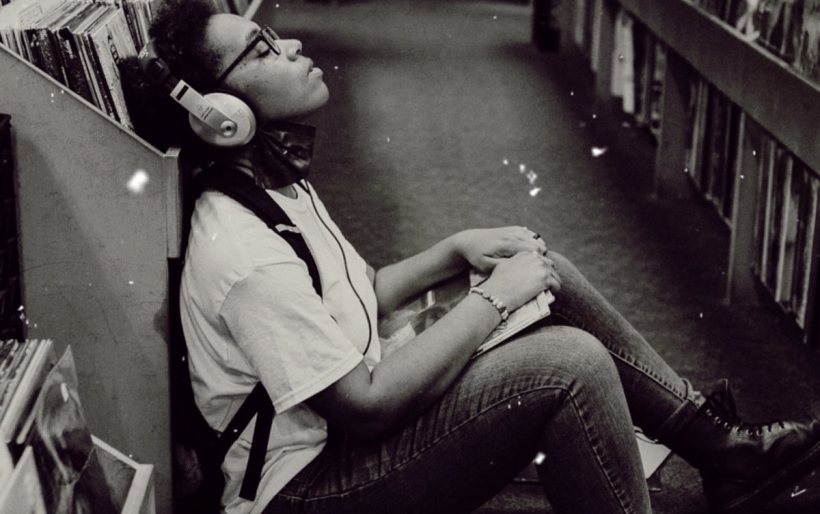 Life, God, and Music: A conversation with Monielle

The Philly-rooted artist chops it up with John Morrison about her vibrant debut project 1994.

D.C.-born, Austin-based MC / singer / engineer, Monielle’s latest album 1994 looks back at a formative time in her young life to inspire songs that touch on faith, growth, love and heartbreak. A Temple University alum, Monielle spent considerable time in Philly while working on 1994 and the result is a soulful and vulnerable melding of hip-hop and R&B. Monielle flexes her MC-ing skills on cuts like “Pressure” and “Love Me or Naw,” while “Power,” “Issues” and “Will We, Won’t We” are full of gorgeously sung vocal harmonies. Wistful and bittersweet, 1994 is an impressive debut. We caught up with Monielle to talk about life, God and music.

John Morrison: For starters, could you tell me a little bit about your background? Where are you from?

Monielle: Sure. I am from DC. We grew up in DC, then we moved to Prince George’s County in Maryland. I was there until college, I went to an HBCU in North Carolina, and then transferred to school in Philly. And then I ended up living in Philly for six years. I got married in Maryland, came back to Philly, finished school and we were in Philly for six more years and now we’re in Austin.

JM: Where’d you go to school in Philly?

JM: Growing up in DC as a kid, were you musical? Did you explore music as a kid?

M: Yeah, it was music and basketball. . That was my thing. I grew up around a lot of cookouts and stuff, but with my family, it was just music all day long. It was oldies, it was Mary J. Blige, it was Mint Condition, music all day. I was always surrounded by it and then just kind of discovered I could rap a little bit and I’m like, “Oh, this is nice. This is fun.” And I just started trying things and started writing songs and I’ve been writing songs since maybe fourth or fifth grade.

JM: Were you like recording your own songs too? Or were you just writing?

M: I was. It’s so funny because now I do some mixing and engineering stuff, but as a kid, I figured out how to record layers on the old school desktop computer. You remember the voice recorders? So, somehow I figured out how to use my computer mic to record layers on the voice recorder. I’d record a layer on one of them and then open another one and then play it through the speakers and then record more vocals. So I would have like 25 little voice recorder boxes open on my computer, and one of them would have all those layers on it. So I figured out how to do it, just playing around. And, you know, we would put a radio beside another radio and record vocals onto the radio through that little tiny mic on there. We did a lot of experiments with recording stuff.

JM: I’m jumping ahead a little, but how did you learn engineering?

M: Well the interest started, I think, when I was at school at Temple, it was a group of us. We had a band and we would perform in different places, and when we started recording. The only studios that were available were either expensive or it was always just a bunch of men and us being like youngins, you know, we’re like “We gotta get somebody to come with us”. We don’t just want to go by ourselves. But, just having so many creative friends and wanting to do so much and having to figure out how to pay for it, I’m like, “alright, I need to learn so that I can mix for my friends and mix my own stuff.” Yeah. I think I started learning in 2010.

I have a homie in Philly, DJ Average Joe. And he just started showing me stuff. Just, any DJs or engineers I knew, I would ask the 50 million questions and they would just point me in the right direction. I went on YouTube then I just started recording a bunch of stuff in Logic and just practicing. Just kinda getting my ear used to what things need to sound like. And over time it just got better and better.

JM: Yeah. I was gonna ask you if you mixed this record, cuz it, it sounds gorgeous. I engineer a little bit too, so I’m listening to how the vocals interplay with the music. And I was, I was like, “yo, this is a really clean, pristine record.” Not like sanitized clean, but y’all really like hit the nail.

M: Thank you. That, that means a lot, so thank you for that. I did mix it. It was a lot of back and forth about whether I should. We can be our worst critics and some people didn’t think I could, but my best friends were like, “no, you doing it.” And the guy that had been kind of mentoring me with engineering, he was like, “No, I think you should. I think you should do it. It’ll be a big learning experience.” And then the other issue was that I’m a stickler about it, but we would send it to get mixed. And a lot of times the engineers would know how to mix hip hop, but not the singing. So the singing vocals would come back and they just weren’t good. And I would just be so frustrated cause I’m like, “oh, I can hear the compression” or I can hear that it’s too much compression or what happened to the harmonies or just all these things. I’m like, all right, “Yeah, just do it the way I want it done.”

JM: Could you tell me a little bit about the process of writing and recording 1994? If you could just walk me through as much as possible?

M: Sure, sure. So, the idea came from when I was like 10, Brandy’s song “I Wanna Be Down” came out. I remember looking at the TV and going, “Oh my gosh, I’ve never heard anything like this before. I want to do this too.” So, I’m like, all right, I’m gonna make an album one day. And you know, I was 10, so I didn’t even know what it meant to make the album, but just over time, I began to just take small steps to a learning, how to create a album. And even in high school, I would write songs for my friends to sing, no recording equipment, nothing. So, I would have all these composition books and just songs everywhere.

And so over time, as I’m learning how to record a project and I realize I’ve already put out a bunch of singles and EPs and had the chance to collaborate with other artists. An all of that was fun, but I don’t think I’ve ever said the things that I’ve wanted to just say publicly, and it just kind of turned into let make it myself and let me see what comes out. So, I just started writing, dealing with stuff I’ve never talked about, talking about love and heartbreak, friends, childhood trauma, all types of stuff. So it was very therapeutic, it was very cathartic.

JM: How long were you working on the album?, From the conception stage, like how long between that and being done?

M: I would say I worked on and off for six years.

M: Yeah. I would have songs and I would do like a rough draft of the album listening party with my friends and we would like it. And then I would be like, “I hate it. I’m starting over” so I would just scrap songs like “This sounded like fun music. I’m not having fun. I need to talk about what’s real.” And so I would start over a few times and then we also moved and, it’s like babies and kids and all types of things but it took, it took six years to be happy with every track.

JM: Outside of just hearing that Brandy song, what is it about that year 1994 that you wanted to evoke?

JM: Listening to the record, I noticed that you make mention of your faith and spirituality at different moments throughout. Could you talk a little bit about that and, and if that feels like something important for you to bring to the forefront in your music? What’s the relationship between your music and your faith?

M: Yeah, I came to know the Lord when I was 10 and with my music, my vision is for my faith to be a filter for my experiences. So, I see the world through the lens of my relationship with Jesus. And I want my, my music to just talk about life, like real life that was happening I know that that’s my lane. I‘m talking about love and heartbreaks and different things that I’m getting mixed up in. But then how do I deal with it as a Christian? How am I like coping with it? How am I working through it? How am I applying my faith to all this stuff that I’ve gone through? That’s how I process the songwriting and just what I’m doing as an artist.

It’s like, alright, I almost got into a fight with so and so, how am I dealing with the fact that that almost happened? What do I need to do next? And it’s important for me to talk about that the fight almost happened cuz that’s real life, but then it’s like, okay, well what do you do after that? And my faith, it informs the decisions I make after the things that I’ve struggled with. But yeah, my biggest thing is talking about real life, how my faith informs what I do after real life has hit, you know?

JM: What are you working on next after this album?

M: I’m in grad school currently, so I’ve been trying not to put too many things on the plate. But I’m making like a batch of visuals and live performances so that I can share that. I’m about to start doing a summer series of EPs where I get my friends to sing and I’ll like write for them and stuff. So I’m working on beats, like lofi stuff and helping some other indie artists get started. And we’re talking about a like three-city, little baby tour kind of thing.

Monielle’s 1994 is available now for streaming and downloading through Monielle’s Bandcamp page, where you can also hear her back-catalog singles. For updates, follow her on Instagram at @ayyomonielle.