#XPNFest Guide: Discover new faves and fall back in love with seasoned players on the Camden Waterfront this week - WXPN 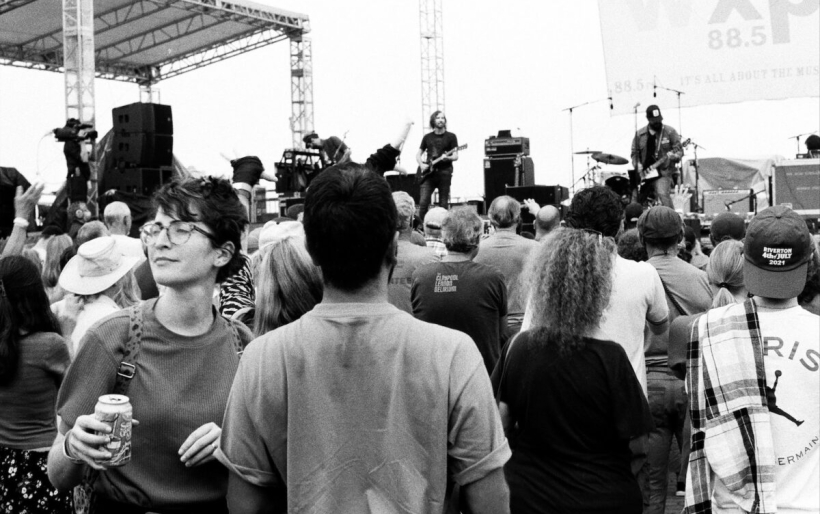 photo by Paige Walter for WXPN

#XPNFest Guide: Discover new faves and fall back in love with seasoned players on the Camden Waterfront this week

An inside look at the 2022 XPoNential Music Festival and its highlights, from The Tisburys to The Dip.

This Friday night, The Freedom Mortgage Pavilion will host one of the biggest and best touring rock bands in the world when Philadelphia’s own The War On Drugs finish off the first night of the 2022 XPoNential Music Festival. But, of course, they weren’t always packing massive venues all over the world. In 2008, The War On Drugs were, like any young upstart band, grinding out anonymous shows in support of their brand new debut record Wagonwheel Blues, and in doing so, they gave the world its first taste of their massive and indelible sound. The intervening 14 years have seen the band grow and change in countless ways but one thing, it seems, remains the same. You see, it was in 2008 that The War On Drugs first played the XPoNential Music Festival, a time that while they might have been unknown to many, but they were already firmly on the WXPN radar. Herein lies the magic of something like the XPoNential Music Festival, a place where the music reigns supreme and you never quite know what you might discover.

“We are in the artist development business,” says WXPN Program Director Bruce Warren proudly. You might not be familiar with names like Catbite, Highnoon, or Bartees Strange, but if Warren and the rest of the WXPN crew get their way, that won’t remain the case for long. It isn’t just The War On Drugs. If you take a look at the archive of past XPoNential Music Festival performers you will find dozens of artists you recognize appearing years before they became household names. From The Lumineers to Lucy Dacus, the track record speaks for itself. It’s the kind of thing, too, that continues to bring performers back year after year. Take a look, for example, at the trifecta of talent that is Patti Smith, Lucinda Williams, and Jenny Lewis. Not only are these artists three of the most gifted songwriters of the last half century, but they’ve all played the festival in the past, some multiple times. “It’s the mix of knowing you are going to see some acts, like Taj Mahal and Lucinda Williams, who have been doing this for 30 or 40 years and have really laid the groundwork for the newer artists who are playing,” says festival Producer Paul Severin.

Part of the charm of XPoNential Music Festival is its consistency, even as it has been threatened over the last couple years. For obvious reasons, last year marked a bit of a reset. Though things went off largely without a hitch, it still felt a little different for all involved. “When you are doing a festival of this magnitude, there is a muscle memory to it, so when you stop for a year everyone kind of forgets stuff,” says Severin, citing the year COVID forced the festival to be entirely virtual. “So this year, I feel like we are back at it in more normal circumstances.” Part of that shift is the return of two full nights at Freedom Mortgage Pavilion in addition to the three days at Wiggins Park. Though that doesn’t mean the virtual aspect of the festival will go away by any means; like last year, all of the Wiggins Park sets will be video webcasting at XPN.org via NPR Music Live Sessions. (The headlining sets at Freedom Mortgage Pavilion, however, will not.)

With all this in mind, it’s difficult to not get excited about the weekend of live music that awaits us on the Camden Waterfront. Whether it’s to discover something new or fall back in love with an old favorite, WXPN’s incredible fanbase of music lovers are sure to turn out in droves to enjoy what is shaping up to be a beautiful weekend. 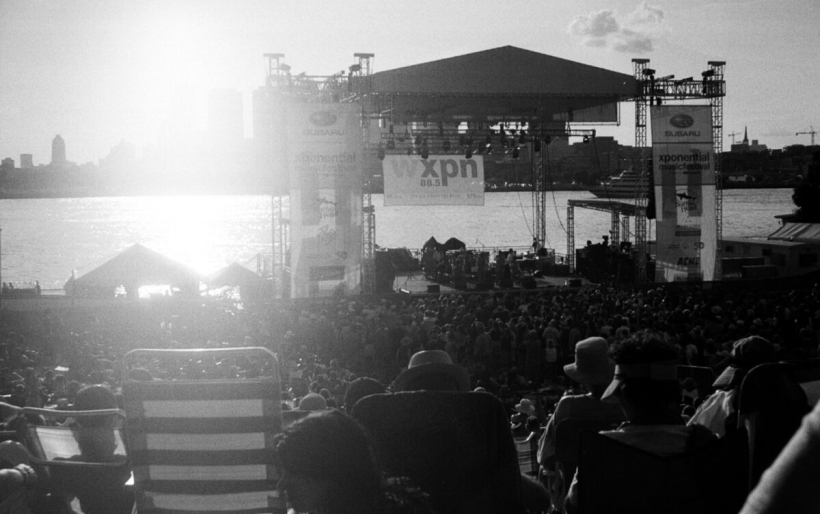 You can file The Tisburys securely within the “hometown heroes” category of XPoNential performers. Seeing as they are set to release their new album Exile On Main Street on the same day as they take Wiggins Park’s Marina Stage to kick off the festival, we can safely say this will be a big day for the Manayunk-based rockers. This ramshackle power-pop band will bring to mind festival alums like Fountains Of Wayne and Dr. Dog and are sure to provide quite the start to this year’s festival.

Sarah Shook and their band released an excellent album, Nightroamer, earlier this year and the album’s blend of rootsy punk, outlaw country, and twangy rock are sure to hit a sweet spot with the XPN crowd. Anyone who caught their performance earlier this year at NON-COMM 2022 – and you can watch it here if you haven’t – will remember the way they were able to rile up the packed house at World Cafe Live. Make sure to catch them on the River Stage at Wiggins Park Friday afternoon.

Sarah Shook & The Disarmers - Talkin' To Myself (live at NONCOMM)

Patti Smith And Her Band

Though we’ve already mentioned Patti Smith earlier, I think this artist warrants another shoutout. This is, after all, PATTI FREAKIN’ SMITH. The poet-laureate of punk rock has been doing her thing for almost fifty years now and continues to be an artist of singular talent. Friday night will mark Smith’s third performance at XPoNential Music Festival, having appeared at both the 2000 and 2005 festival. Having her and her band open for The War On Drugs will surely be one of the highlights of this weekend.

Patti Smith - People Have The Power

Catbite are an example of a band that WXPN has been doing its best to highlight and promote but, the truth is, it’s not too difficult a sell. Featuring Brit Luna, Tim Hildebrand, Chris Pires and Ben Parry, Catbite are almost instantly likable. Presenting an infectious blend of ska, pop, and punk, they are the type of band that charms the hell out of an audience, even if they might not be wholly familiar with their growing catalog. Did I mention they are from right here in Philadelphia? Honestly, there is nothing not to like about this band and I think you’ll feel the same after their performance on Saturday afternoon at Wiggins Park.

There were a couple of names that came up again and again as I talked to the people involved in the planning for XPoNential 2022, and Black Opry Revue were among the ones that stoked the most excitement. “I stood in the studio while they performed and I was in awe,” said Bruce Warren of the time in February of 2022 when Black Opry Revue were featured on World Caf. “I decided then and there I was booking them for the festival.” Black Opry Revue are more of a collective than a proper band, pulling from a pool of Black musicians working within the country music spectrum. The goal, as stated on their official website, is to change stereotypes that work to overlook and ignore Black people’s influence on the history and continued evolution of country music. As with the World Cafe taping, Philly’s own Sug Daniels will join the Revue at XPoNential; make sure to check them out on the Marina Stage on Saturday afternoon.

Bartees Strange is another artist garnering significant excitement among those familiar with his unique style and increasingly impressive catalog. Strange recently released his second record, Farm To Table, a record stuffed with as many lofty ideas as pure pop hooks. A relative late bloomer, Strange seems poised to continue his trajectory to the top of the indie/alternative world. Though I am not one to make wild proclamations, Strange seems likely to be the kind of artist who will be headlining Freedom Mortgage Pavilion in no time. So why not take the time to catch him playing in Wiggins Park while you get the chance?

Lucinda Williams will return to the XPoNential Music Festival for the first time in almost 24 years when she takes the River Stage a little after six o’clock on Saturday evening. A true musician’s musician, Williams has been doing her thing for quite a while now, producing some of the greatest Americana/country songs of the last three decades. It’s hard to overstate the influence an artist like Williams has had on the songwriting, style, and attitude of so many of XPoNential Festival performers past and present. If you’re not familiar with Williams, or if you are, Saturday is an excellent opportunity to see a living legend perform from her extensive catalog.

Like Williams, Kathleen Edwards is a XPoNential vet, having played the festival in 2003, 2012, and 2019. When the Canadian singer-songwriter first appeared at the festival, she had just released her debut record Failer but has since released four accomplished and beloved studio albums, her most recent, Total Freedom, in 2020. An experienced songwriter and performer like Edwards is always a treat and Sunday afternoon promises to be no different. Edwards will take the River Stage on Saturday at 4 p.m..

The Dip first arrived on the XPN radar when they were named the May 2022 Artist To Watch. The seven-piece Seattle band play an energetic and eclectic brand of R&B and soul, finding a way to blend retro stylings with a modern sensibility. Let’s face it, by late afternoon Sunday you might need a bit of a pick me up, which is why The Dip are the perfect band to finish The Marina Stage on the final day of the XPoNential Music Festival. One final dance party to end the weekend? We will see you there.