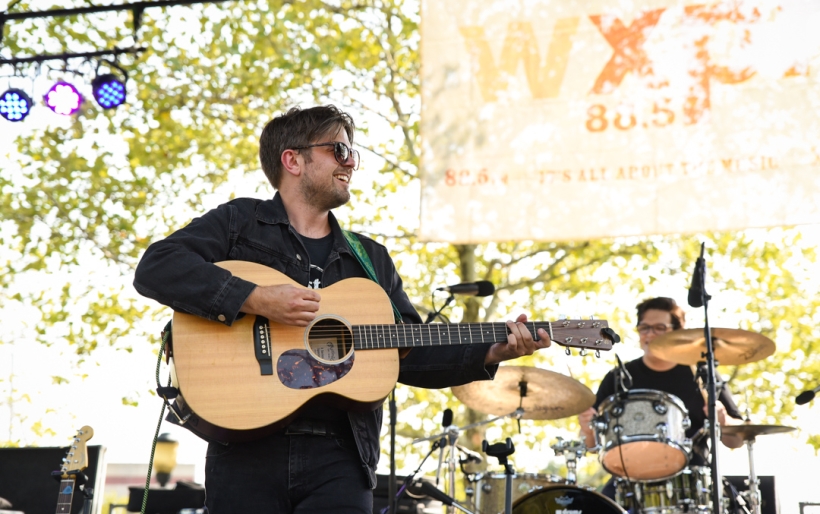 The Tisburys | photo by Megan Matuzak for WXPN

The Philly band kicked off this year’s festival with a showcase of their brand new album, Exile On Main Street.

As the crowd rolled in down the hill to the Wiggins Park Marina Stage, Philly rockers The Tisburys got the afternoon under way with a double celebration: their first appearance at the XPoNential Music Festival and the release of their new album Exile On Main Street, out today.

The band’s spirited and energized rock hooks captured the crowd’s attention quickly — they’re a little bit Replacements, a bit Wilco, if comparisons are your thing — as they powered through a six song set showcasing the new album’s hooks and dynamic range, “Language of Luxury” and “The Garden” leading the charge.

They were pumped to play their new music, but they were equally pumped to be here. “I can’t believe we’re playing XPNFest right now, this is amazing,” Asay gasped between songs. “Doug [Keller, bassist] and I both interned here, we never thought we’d be up here on this stage.”

After sending the knockabout rock bruiser “Walk Away” out to longtime XPN Local host Helen Leicht, The Tisburys launched into a glorious performance of “Water’s Edge,” and brought their good buddy and longtime supporter Reuben Frank of NBC Sports Philadelphia joining them to play keys on the high-drama “On The Run In Harmony, NJ.”

A soaring performance of “In The Moonlight (Fade #3)” from the band’s Sun Goes Down album brought The Tisburys’ set to a close and officiated the weekend: XPNFest was now under way. Listen back to their performance and check out a photo gallery below.