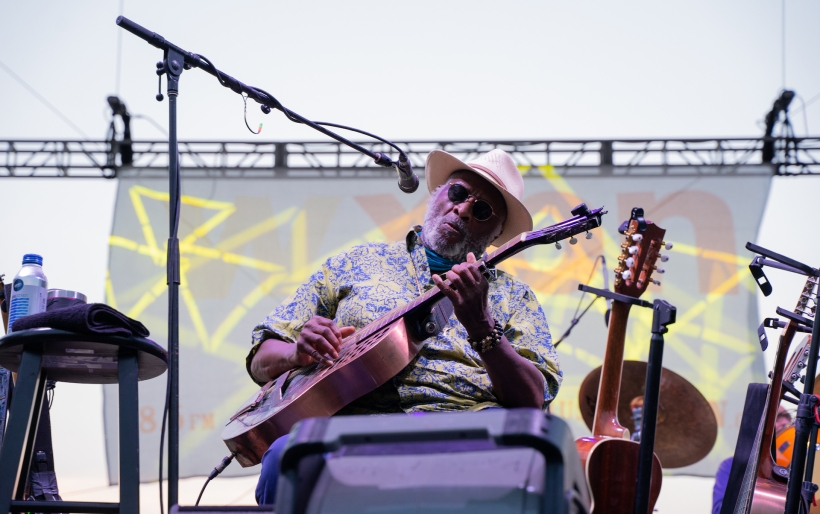 Legendary bluesman Taj Mahal was silly, swinging, and seductive on the River stage

Taj Mahal’s XPNFest set was a sunny, celebratory blend of blues with the sounds of the Caribbean islands.

When Taj Mahal performs, it sounds like his voice and his guitar are having a conversation with each other. The legendary blues musician held court on the River stage last night, surrounded by a ring of string instruments—including his signature ukulele, which he pronounced “oo-koo-lay-lay”—and his trusty long-standing band.

He introduced them later in the set; Bill Rich is his bassist, and a Taj veteran since the ‘60s; Kester Smith on drums joined in the ‘70s; guitar player Bobby Ingano was his most recent addition.

Instead of coming into the day with a locked-in setlist, Taj called out songs ad hoc, feeding off the crowd’s celebratory energy. He’d managed to amass a pretty massive group in front of the stage, and every once in a while he’d call out to the crowd. If their response wasn’t sufficiently energetic, he’d reply “Oh, y’all know I ain’t gonna go for that,” and they’d cheer again.

Taj’s showmanship wasn’t the only thing keeping the mood high; his songs were a sunny, celebratory blend of blues with the sounds of the Caribbean islands perfectly engineered to get the old couples camped out on the lawn up and dancing.

In his alternatingly tender and gruff voice, Taj sang about pretty women with terms of endearment like “honey bird” or “queen bee.” One song was dedicated to “the ladies who know how to move their critical mass.” He was playing the part of the charming old codger, crooning “I’m wild about my loving” and then letting out a strange feral cat noise, to riotous laughter.

There’s a flirtatious way to the way Taj Mahal plays the guitar, too—like he’s less performing than coaxing sound out of it, something he acknowledged himself. “the songs come to visit me, they say ‘daddy will you play me?’” His answer: “yeah baby.”

Listen to his performance and check out a photo gallery below.