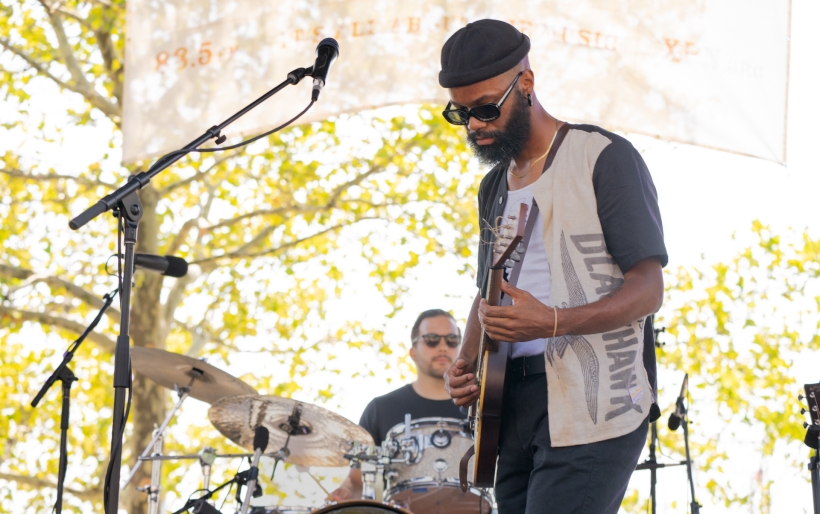 The Milwaukee guitarist and singer-songwriter exhibits a mastery of a wide range of tones and styles – dreamy atmospheric soundscapes on “Lost & Lonesome,” a hybrid of raga and delta blues on “How To Love,” Yngwie-esque heavy metal shredding on “Sick Bed Blues,” and nimble acoustic fingerpicking on “Life Goes On.” His tastes are wide and varied, as his Friday Morning Mixtape on the XPN Morning Show exhibited a while back, and he did it all in today’s performance.

But the more significant thing to know about Nichols’ set: it wasn’t all about pretty sounds. “Having fun?” Nichols asked the crowd. “I’m gonna do my best to change that.” Underneath the mesmerizing tones and textures Nichols and drummer Noel Chandig delivered were songs that dug deep into the history of racism and oppression in America.

An unreleased song called “Broken Heart of America” started with lyrical images of slavery and led into depictions of a more contemporary struggle, culminating with the cutting verse “When you sing your nation’s song, you may not know the words, but still you sing along / And each voice echoes a refrain that chills the blood in my veins.” Later, “Another Man” was a harrowing account of hate crimes, specifically the murder of Black folks by those in power: “When my grandpa was young he had to hold his tongue / ‘Cause they’d hang you from a bridge downtown, now they call it stand your ground. / Another man is dead.”

Nichols also sardonically critiqued the whitewashed history of Americana as a genre. “It’s great to be here promoting diversity at roots festivals,” he said. “There’s usually not a whole lot of Black men performing at these things, it’s usually just me and Joni Mitchell. I gotta keep showing my face, trying to change things.” If that reference to Don Juan’s Reckless Daughter and Mitchell’s colossally bad creative decisions around its aesthetic flew over the heads of some festivalgoers, Nichols was more direct as his set wound to a close: “There’s a lot I want to say, but I got a lot of songs but not a lot of time. So the one thing I want you to remember when I leave here is that Joni Mitchell did blackface.”

Listen to Buffalo Nichols’ pensive, profound, and throught-provoking performance below.