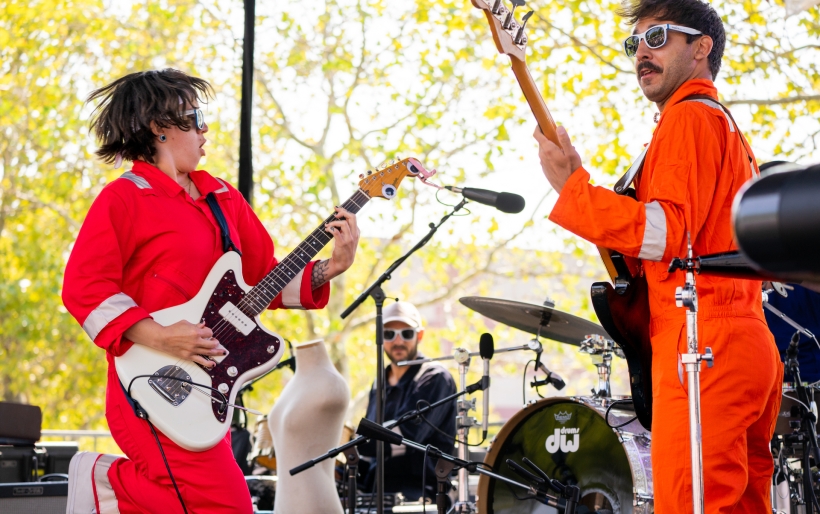 Chestnut Grove opens up day three of XPNFest with a bang

The Perkiomenville outfit took the marina stage with matching jumpsuits and high energy.

“We’re your neighbors from Perkiomenville!” said Dee Gerhart of Chestnut Grove. “Just a quick hop, skip, and a jump up I-76.”

The seasoned regional roots rock combo took the Marina Stage today to get day three of XPNFest going. They wore brightly-colored coordinated jumpsuits and used them for lots of actual jumping, dancing, and presumably sweating as the midday sun soared over Wiggins Park.

Showcasing the band’s latest release, the Can’t Stand The Music EP — which got a stellar showing a few weeks back at Free at Noon, and which finds the band expanding their sonic palette into disco and soul — Chestnut Grove balanced the midtempo grooves of “All For You” and the cosmic “Maharishi” (which featured drummer James Daniels stepping to the front of the stage for lead vocals) with revved up rockers “No Stranger” (which featured Gerhart and keyboardist / guitarist John Tyler simply going off) and the Zeppelin-esque closing rager “Jack Knife / Skip To My Lou.”

With the lineup expanded by vocalist Adena and percussionist Jeff Mann, the band packed every minute of their performance with energy, and then encouraged the crowd to rush over to the River Stage to catch Cosmic Guilt. Listen back to their set in full and check out a gallery of photos below.
Chestnut Grove: Full Set (XPoNential Music Festival 2022)
Photos by: Ellen C Miller
01
18
Setlist
Sep
18
Chestnut Grove
XPoNential Music Festival
Related Content
View All Related Content