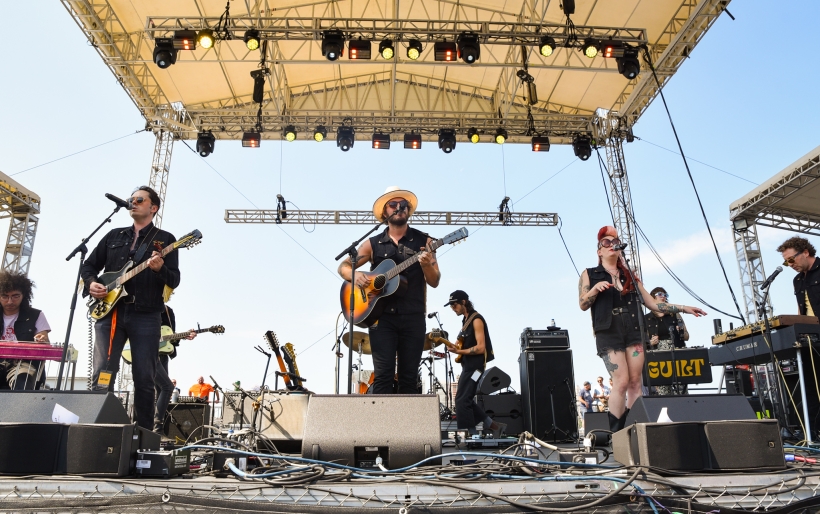 Cosmic Guilt’s set was glorious hipster excess in the best possible way, and the group had the chops to back it up.

Electric sitar, glockenspiel, harmonica, pedal steel, and multiple 12-string acoustic guitars all made appearances. It was glorious hipster excess in the best possible way, and the group had the chops to back it up.

Led by Scantron’s James Everhart, the eight-piece local supergroup took to the River stage to run through selections from this year’s self-titled debut album. These were cinematic country songs with all the bombast of Arcade Fire and the warm communal glow of a campfire sing-along.

What’s really cool about Cosmic Guilt is they’re not afraid to make tunes that sound gorgeous. “Blue Heaven” swooned with chiming guitars, “Greener Leaves” glided on perfectly pretty vocal harmonies, and set opener “Cautious Lovers” twinkled with glockenspiel, which has been the de facto instrument of wistful Millennial emotionality ever since Rilo Kiley’s “With Arms Outstretched.” (And wouldn’t you know it — Jenny Lewis herself will be taking the River stage at 6:00 p.m. today.)

“This is almost like our first birthday party, which is pretty cool,” Everhart said, and it’s crazy to think that Cosmic Guilt’s only been around for a this short period of time when they play this well as a unit. These are musicians who cut their teeth in a bunch of Philly bands, and came together with a clear vision of exactly what they wanted to do: run their vintage 70s references through the lens of 21st century indie rock.

One listen to their majestic self-titled road song is all you need to know they’ve more than succeeded.

Cosmic Guilt is playing Concourse Dance Bar on October 9th. Listen to their performance and check out a photo gallery below.