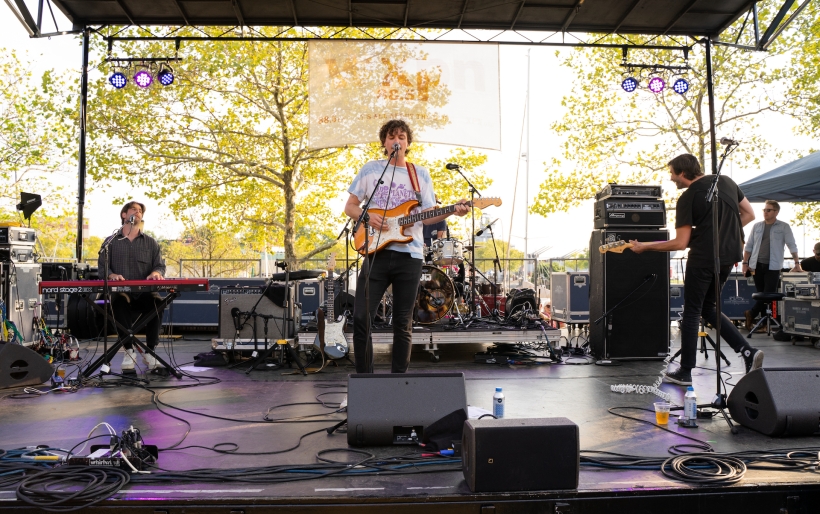 The Indiana roots rockers showcased their latest album Good For You in their return to the Marina Stage.

When the midwestern indie-roots outfit Houndmouth made their Wiggins Park debut in 2014, it quickly became a piece of XPoNential lore. The band was on an afternoon slot on a beautiful day, and the huddled in to the lip of the Marina Stage, bopping around and singing along to the infectious single “On the Road” from their 2013 debut From The Hills Below The City, which was in heavy rotation on XPN at the time, and getting an unforgettable first taste of their breakout single “Sedona,” which was still six months away from its official release, on Little Neon Limelight.

Eight years down the road, Houndmouth returned to XPoNential to show that the magic is still there — albeit in a slightly different format. Keyboardist and vocalist Katie Toupin left the band to pursue a solo career in 2016, before the band began work on Golden Age. Caleb Hickman stepped in to fill that role, and the band shifted their sound to a more guitar-forward direction on their latest release, Good ForYou. This was the energy they brought to the Marina Stage this weekend.

As the rolling riffs of “Las Vegas” slid into the grimy groove of the appropriately-titled “Cool Jam,” singer-guitarist Matt Myers took stock of the crowd climbing up the hill and the breeze rolling in from the water. The band had played a sweltering midday set at a Kentucky whiskey festival the day previous, Myers said (Bourbon & Beyond in Louisville) and “this is a much better vibe.” Houndmouth showcased six of Good For You‘s eight songs, and dipped back to From the Hills for “Palmyra” — appropriate enough just around the river bend from the Tacony-Palmyra bridge. To wrap, they played a block of songs from Limelight, including “Sedona,” for a full-circle moment and a reminder to the crowd that they heard it here first.