The Suffers return to XPNFest with songs of love, rage, and joy - WXPN 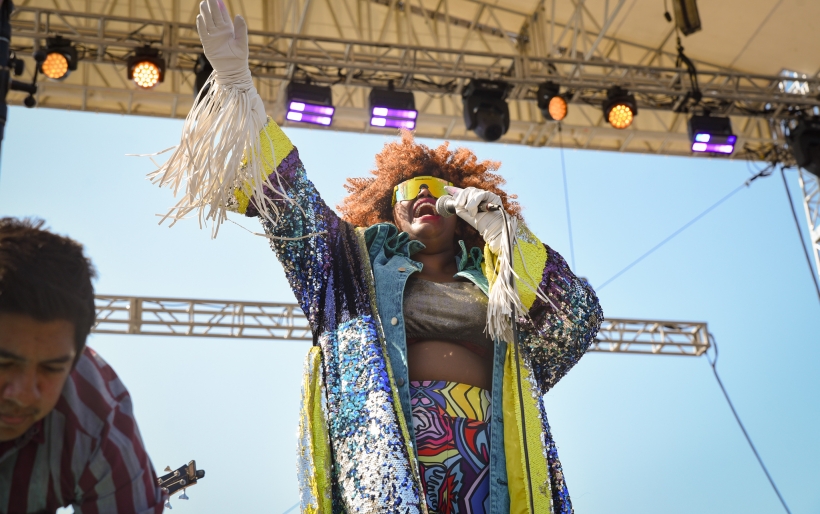 The Suffers | photo by Megan Matuzak for WXPN

The Suffers return to XPNFest with songs of love, rage, and joy

The gulf coast soul faves raised the bar on the River Stage.

Houston, Texas-based The Suffers made their fourth XPoNential appearance this Sunday afternoon on the River Stage. “It feels so good to be back here,” singer Kam Franklin said as the band erupted into a dance-heavy R&B / funk set that raised the bar for every band who has yet to play.

The AAA radio favorites led off the set with two new songs from their 2022 record It Starts With Love, making sure to give the XPN audience a performance they’d never seen before. The band was dressed in brilliant colors and brought colorful set decorations. The horn section, comprised of trumpet and trombone, swayed in time to the rhythm. Franklin gave the audience a couple a few small costume changes, and sported different colored gloves throughout the set.

The Suffers’ setlist was full of gems, including one song, “Yada Yada,” that was “not safe for children or radio” enough that they edited to make clean. In the song, Franklin calls out “the BS” in the entertainment industry, commenting on how algorithms rule what people listen to, and knocking down the posers who “talk shit behind your back, then call you a friend.” Franklin’s vocals seemingly had no limit, and soared above the packed standing crowd, elevating her words to spiritual heights.

Another standout was “How Do We Heal,” a song The Suffers recorded with Son Little. This soulful tune featured The Suffers’ signature formula of show-stopping vocals bolstered with New Orleans-flavored rhythms and funky percussion, and also served to answer the hypothetical the band was posing in the lyrics. “How Do We Heal”? We listen to The Suffers live in a crowd giving them their full attention and clapping along.

Halfway through the set, The Suffers jammed to the positive energy “Could This Be Love.” “I’ve written a lot of songs about really bad relationships,” Franklin said. This song, instead, lovingly described a healthy coupling. Also on a lighter note, the band wished the crowd ample vacation time this year. “We love vacation,” they said, adding that it would be smart to be claiming remote hours for your job right now. “I hope some of you are getting paid to be here,” Franklin said, and this reviewer had almost forgotten how fortunate she was to be working today.

The Suffers’ new album It Starts With Love is out now wherever you stream music. Give a listen to about half of the record’s songs live at the link below.