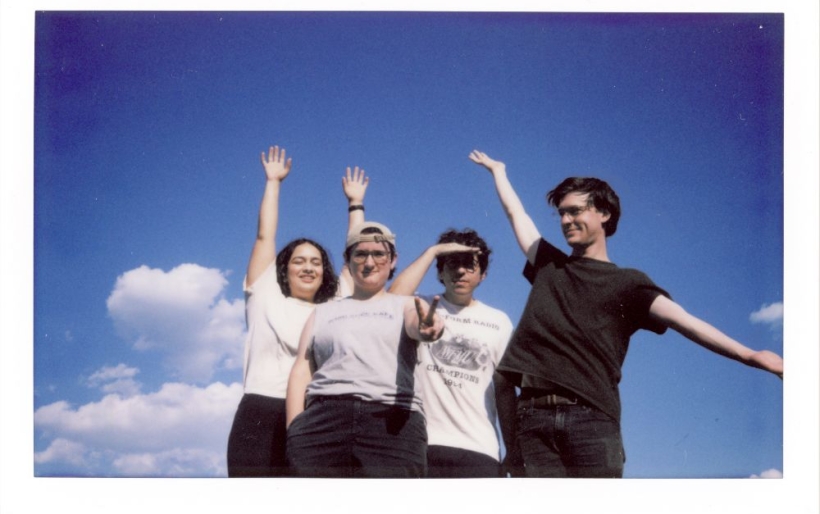 Remembers Sports | photo by Emily Reo, courtesy of the artist

The Philly pop-punk band is releasing an EP of the same name tonight at midnight.

In a last-minute surprise, Philly pop-rockers Remember Sports announced a new EP, their first new music since last year’s Like A Stone. Leap Day is out tomorrow on Father/Daughter and Big Scary Monsters. The band also released a video for the EP’s title track—a slice of sunbleached pop-punk that doesn’t overstay its welcome.

On “Leap Day,” core trio Carmen Perry, Catherine Dwyer, and Jack Washburn make use of a drum machine for the first time in their decade-plus run. It’s a choice that sacrifices some of their trademark raucousnesses but leaves more room to focus on Perry’s melodies, which are sweet and sticky like saltwater taffy. During the pandemic, the bandmates worked on their own solo bedroom projects, and that influence is reflected in production choices like the scuzzed-out guitars that cap off the last thirty seconds.

For the song’s music video, Remember Sports frolicked around on a sunny day at John Heinz National Wildlife Refuge. The compiled footage, full of quick cuts and overlays, is a lot like the ending of Richard Linklater’s Slacker, a comparison I’m sure the band wouldn’t mind. But even though “Leap Day” takes place in the winter, with Perry singing  “We could ice each other out / but I think it’s too cold for that right now,” this song and video are perfectly engineered to thaw the ice.

Remember Sports seems to agree. In a press release, the band described Leap Day as “a great EP for walking around your neighborhood on a sunny day and noticing things you never noticed before.” Watch the music video below, and check out the EP when it releases tomorrow on their Bandcamp.