Tangled Up In (Red and) Blue: Listen to Penn President Liz Magill’s guest edition of the Friday Morning Mixtape - WXPN 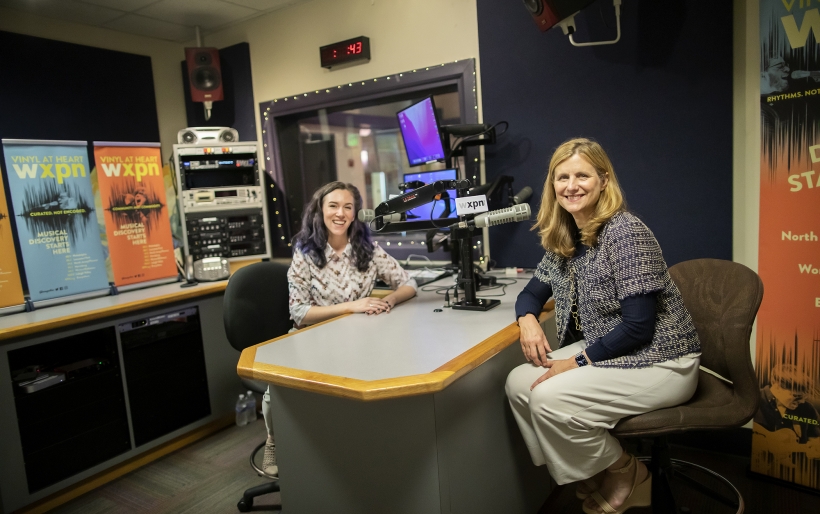 Tangled Up In (Red and) Blue: Listen to Penn President Liz Magill’s guest edition of the Friday Morning Mixtape

This week, we’re bringing you a very special Friday Morning Mixtape, curated and guest hosted by the new president of the University of Pennsylvania: Liz Magill.

She began her tenure on July 1 and came to us from the University of Virginia, where she most recently served as executive vice president and provost. President Magill is originally from Fargo, North Dakota, and earned her bachelor’s degree in history from Yale, before achieving her JD from the UVA School of Law, where she eventually joined the faculty and held several positions, including vice dean.

Her illustrious career also includes a seven-year stint as the Richard E. Lang Professor of Law, and dean of the Stanford University of Law, teaching at Harvard and Cambridge universities, and working with the U.S. Senator Kent Conrad, Judge J. Harvie Wilkinson III of the U.S. Court of Appeals for the Fourth Circuit, and U.S. Supreme Court Justice Ruth Bader Ginsberg, just to name a few of her accomplishments.

When we heard that somehow she had time to become a huge music fan, we thought having her in to talk about her favorite artists would be a great way for all of us in the Penn community to get to know her.

In our conversation, President Magill spoke about her summer spent out and about at Penn and in Philadelphia, getting to know campus and the city. She has immersed herself in the food, history, and culture of the city. She spoke admiringly of the Philadelphia Orchestra to the music of The Roots (she’s a fan of Questlove’s work, especially the Questlove Supreme podcast and his Academy Award-winning Summer of Soul documentary). “Philadelphia is a feast,” President Magill said.

She also touched on points of Penn pride, from the music department she called “world class” to the history of alumni including John Legend.

And with a baker’s dozen of songs to play over the hour, President Magill introduced the Penn Community to her omnivorous musical tastes, from Prince and Sheryl Crow to Cape Verde singer-songwriter Mayra Andrade and London folk/soul artist Yola. President Magill cites Bob Dylan’s Blood on the Tracks, Wilco’s A Ghost is Born, Paul Simon’s Graceland and Haim’s Women In Music Part III as her favorite albums, and describes her tastes as “obsessive” and centered around the mood and emotional response that music provokes. She said, “I am sure that I listened to the song ‘Paul’ at least 1,000 times,” also citing Tracy Chapman’s “Fast Car” as a song that drew her in.

Listen to a full archive of President Magill’s conversation with Kristen Kurtis on the XPN Morning Show below, and check out her playlist, too.