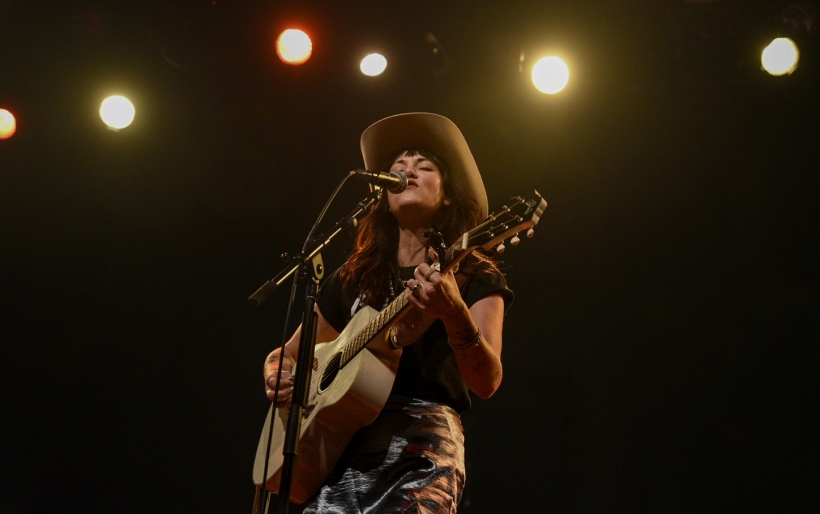 The show coincided with the release of Lane’s new album, ‘Denim and Diamonds,’ her first since 2017.

The Nikki Lane credo goes something like this: work hard, but not for the man. Take care of yourself. Take care of others, but don’t expect them to do the same for you. Pass down everything you learn. Buy your own denim and diamonds.

These lessons and more are imbued in the songs from Lane’s new album Denim and Diamonds, out today on New West Records, which made up the entirety of her Free at Noon concert. Decked out in a Wild West-meets-Williamsburg getup of cowboy hat, iridescent skirt, leopard print Vans, and “Tequila” socks, she wasted no time jumping into a suite of indie rock-tinged country barnburners.

Apparently, the socks were left over from last night’s album release party, which took place on a boat sailing around the Statue of Liberty—a full circle moment for Lane. After the ballad “Faded,” whose rough-and-tumble instrumentation was gilded with weeping pedal steel, she told the story of her first ever trip to New York City: taking shrooms and going on the same boat ride, where she watched “two psychedelic bands” play.

From there, Lane launched into “Good Enough,” the day’s most beautiful song. Over a deep bed of chiming guitars, she sang about the “true love and vows” of her grandparents’ marriage. Then it was time for “Try Harder,” an anthem of self-determination that the singer preceded by remarking “there’s nothing wrong with me, there’s something wrong with all of us.” Both songs showcased a voice much more weathered and lived-in than you’d expect from her appearance; the voice of someone who’s lived through some shit and come out stronger on the other side.

Before she could kick off the next number, there was a surprise in store! A cake with Lane’s album cover in the frosting was brought onstage, courtesy of her label and WXPN . “I’m trying not to make Loretta Lynn face … look at my face on the cake!” she exclaimed.

Lane is clearly a devotee of Lynn, and (more surprisingly) Cher, whose famous “mom, I am a rich man” clapback she quoted on set closer “Denim and Diamonds.” But these songs couldn’t have come from anyone else. Raised in the church, going to Al-Anon meetings as a kid before running off to join a motorcycle gang in California—Nikki Lane has a good enough story to power her music all on its own.

Listen back to the show below. Nikki Lane is playing Ardmore Music Hall on Saturday, December 3rd; more information can be found at WXPN’s Concerts and Events page.