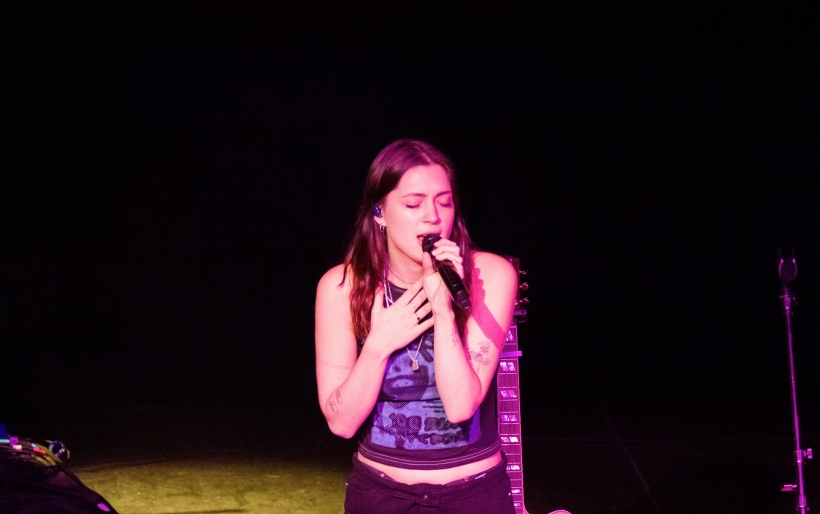 The Philly born-and-raised singer-songwriter is on tour behind her sophomore album ‘five seconds flat.’

It was going to take more than a delay to rattle the congregation outside the Theater of Living Arts last Friday evening. There was a line stretching around the block to see Philadelphia-born singer-songwriter Lizzy McAlpine, and even though doors opened an hour late, no one was deterred. Instead, the mostly high school and college kids braced against the early autumn chill, tucked into their supersized slices of pizza from Lorenzo’s, and waited.

Lizzy McAlpine inspires this kind of devotion. People arrive hours ahead of time to greet her when she arrives at a venue, and someone wore a pancake costume at her Philly show. McAlpine writes folk songs for the TikTok generation—the kind a teenage girl wishes she could turn her hopes and heartbreaks into—and makes it seem effortless. She also put out her debut album at the height of the pandemic, so this tour is her first as a headliner.

The music that played as everyone funneled into the venue was a collage of the highbrow and lowbrow influences from McAlpine’s new record, five seconds flat. Big Thief and Sabrina Carpenter shared the billing, and the whole crowd sang along when “The Way I Loved You” by Taylor Swift started playing over the speakers. Her music captures growing up so well in part because it’s inspired by the music she and her fans grew up listening to. 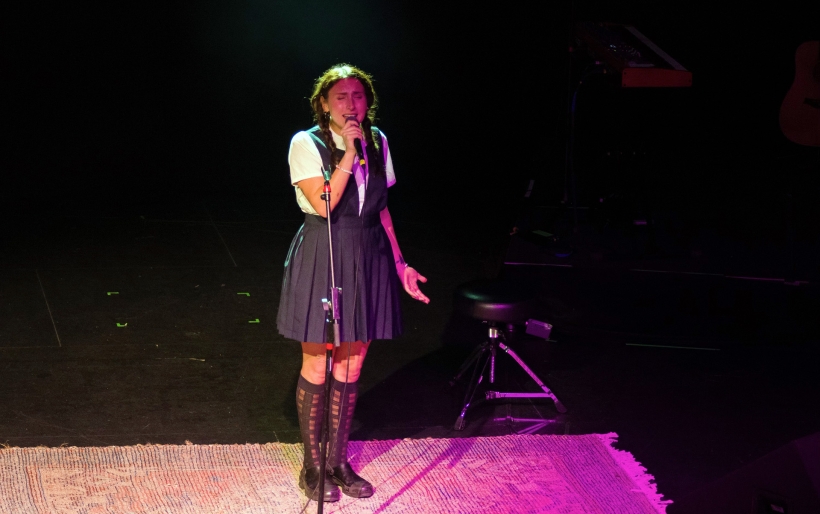 Despite a late start, we were still treated to a performance from Carol Ades, the night’s opening act and one of its most pleasant surprises. A Jersey native and former contestant on The Voice, Ades’ witty, cutting, and vulnerable coffeehouse pop was a perfect fit alongside McAlpine.

Ades was dressed exactly like Wednesday Adams and accompanied by her lone guitar player Vanessa, quirks that, if anything, bolstered her relatability. Before launching into “26,” she asked the audience “Does anybody here know what they’re doing with their lives?” A few people tentatively raised their hands. “To the people who raised their hands…read the room,” Ades admonished, before addressing the vast majority who hadn’t: “This is our time.”

Her pop cultural reference game was also on point. “I Can’t Wait to Be British,” featured a delightfully self-deprecating couplet of “I know I’m talented / But not as good as Phoebe Bridgers,” and later Ades went on a diatribe about a TikTok courtesy of Glee alum Lea Michele, alluding to the conspiracy theory that Michele can’t read.

To close out the six-song set, “Crying During Sex” brought a vocal performance that was totally unselfconscious in the best way, the kind you deliver to the stuffed animals in your bedroom, as Ades belted out the chorus of “God, I’m so obsessed with forever!” And the plot twists and turns of stunning ballad “Unlearn Me” were apt foreshadowing of what was to come. 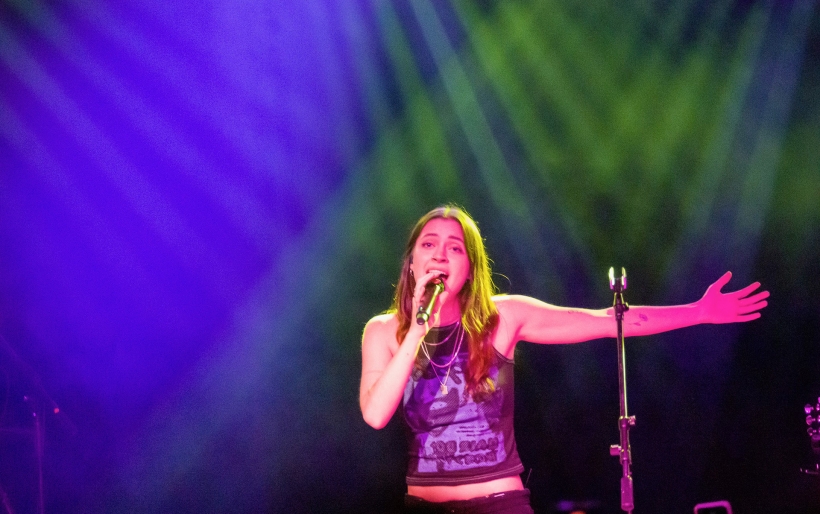 Capturing the electric anticipation in the room before McAlpine made her appearance is a challenge; suffice to say that even the drummer tuning his kit was enough to elicit hoots and hollers. But that didn’t come close to the frenzied applause that greeted McAlpine when she came onstage, her two-piece backing band launching into the uptempo groove of “an ego thing” without missing a beat.

This was our introduction to her genre-ambivalent mashup of folk, rock, and indie pop: tumbling, tom-heavy drums, atmospheric synths, strummed acoustic guitars, and McAlpine’s understated, conversational alto. A few songs later, the sexy and conflicted “firearm” was dry as a pile of tinder until it caught fire in a grunge-pop explosion. You can tell Paramore and Avril Lavigne were definitely in her heavy rotation as a teenager.

Lizzy McAlpine’s songs resonate because they’re brutally honest, savage, and nuanced. They talk about the worst kind of guys and why we fall for them anyway. That explains how she was able to get the crowd screaming like crazy with just a single chord at the beginning of “Over-the-Ocean Call” and “ceilings.” The former is powered by a rallying cry of “I’m fine, I’m fine,” which is exactly what you say when you’re anything but fine.

Meanwhile “ceilings” spotlighted another trick in McAlpine’s arsenal: the narrative reversal. The chorus of “You kiss me in your car / And it feels like the start of a movie I’ve seen before” is undermined by a devastating revelation in the outro, that “It’s not real / And you don’t exist.”

Beginning with “To The Mountain,” the mellower, folksier second half of the set was a testament to McAlpine’s gifts as a songwriter. For one, she isn’t afraid to push her voice to do interesting things, like throwing in vocal runs here and there sweet ditty “Apple Pie.” Two unreleased songs — “Emma,” a breathtaking ode to Lizzy’s sister, and encore “Come Down Soon,” which recalls Fleetwood Mac’s “Dreams” — might have been the concert’s best.

By the time the encores rolled around, it all started to come together for me. “Pancakes for Dinner” explained the pancake costume from earlier, and “Orange Show Speedway” illuminated McAlpine’s album title: “racing head-first towards something that’ll kill you in five seconds flat.” They’re songs that feel personal on the album, but become deeply communal in a crowd.

Of course, the last pre-encore anthem “erase me” would’ve made just as good of a set closer. After all, what more can you hope for as a performer than to have an audience literally singing your backing parts, helping you tell your story. Right before the climax, Lizzy McAlpine broke things down to the quietest they had been all night, whispering “It feels like you” before building the song back up to a scream. Almost 1,000 voices screamed along with her.