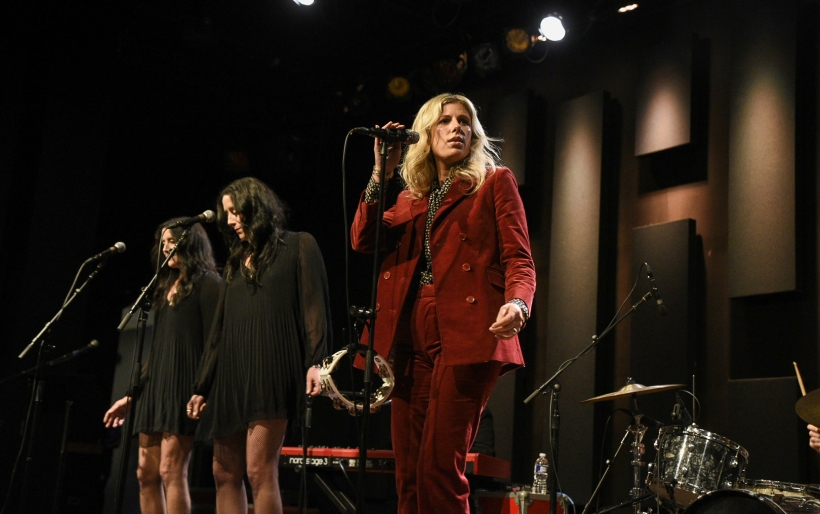 I need to know where Jessie Baylin got the suit she wore on the Free at Noon stage today. It was a plush red velvet blazer and pants, immaculately tailored and paired with a polka dot blouse. When you wear an outfit like that, you don’t have to do much else to command the audience’s attention, but the suit was also an apt metaphor for Baylin’s music: impalpably retro, contemporarily chic, and drop-dead gorgeous.

The Nashville recording artist is touring in support of her new album, Jersey Girl. Like most Nashville outfits, Baylin’s and her band’s standards of musicianship and songwriting are consistently high, but this performance was a step above the region’s standard fare.

For one, Baylin’s guitar player was on a totally different wavelength in the best way possible. Going trigger happy with effects pedals, his tremolo-heavy playing drew the most from the Edge, or My Bloody Valentine’s Kevin Shields. On songs like the set opener “Kiss Your Face,” Baylin’s smoky alto dissolved into his torched-out psychedelic atmosphere, even as he was careful not to trample over her completely.

Then, there was the surprise addition of the Watson Twins to the lineup. It’s a given that the sisters’ vocal harmonies are unparalleled, but what’s not discussed nearly enough is their mastery of backup singer choreography. Especially on the Brill Building-adjacent “That’s The Way,” the subtle but perfectly-coordinated gestures brought the perfect amount of showmanship to the afternoon.

As a songwriter, Baylin’s melodies and chord progressions sound intimately familiar, even if you can’t put your finger on why. They might as well have been around for decades. “Cloud Nine” had traces of Linda Ronstadt, but bore a closer resemblance to the “You and I,” by Swedish singer Madleen Kane. Lyrics mostly took more of a backseat to wordless melodic refrains of  “ayy hey hey” on “Creepers (Young Love)” and “la la la la” on the set closer “Jersey Girl.”

That song, plus “Time is a Healer” before it, were the day’s twin showstoppers. The shoegazy “Time” kept picking up momentum like a runaway train, building to a double time rhythm and power chord windmills, and the title track from Baylin’s new album was a breathtaking piece of balladry. “Thanks for letting this Jersey Girl into Philadelphia,” she said at one point. With songs like this, she’s welcome back anytime.

Listen to a recording of the show below. Jessie Baylin is playing the Transparent Gallery in Asbury Park tomorrow, October 1st; more information can be found at WXPN’s Concerts and Events page.