On Fossora, Björk demands connection in the face of discomfort - WXPN 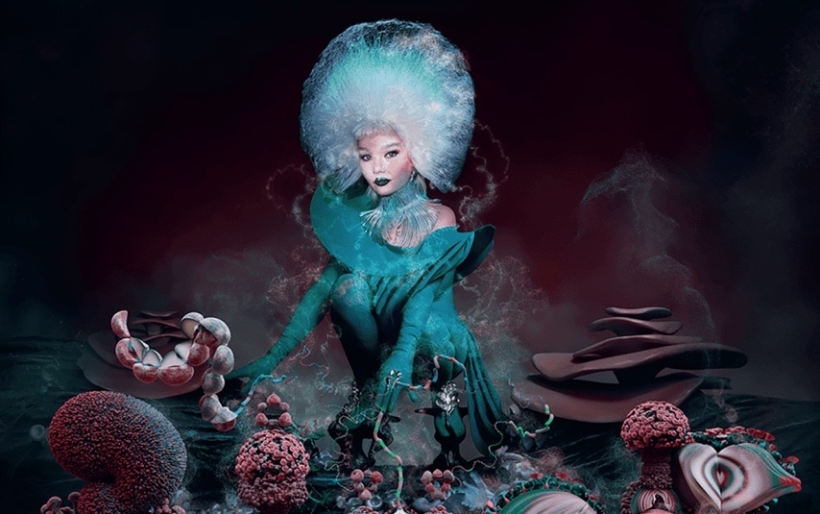 On Fossora, Björk demands connection in the face of discomfort

For an artist who’s constantly creating new worlds, it feels only right that Björk would have her own personal lexicon.

Since as far back as “Hyperballad,” the art pop matriarch has cobbled together her own portmanteaus and scientific nomenclature, for when English — or any other dialect — has been insufficient to capture the intricate phenomena of her internalities. Now, a new term has joined the ranks of Björk’s constructed language: Fossora, a feminine form of ‘fossore,’ translated as “she who digs.” It’s an apropos title for her 10th studio album, which finds the relentless musical innovator digging into her back archives, her heritage, and into the fecund soil of her Icelandic homeland. Across these 13 tracks, gabber drums pound like drills down into the earth, revealing scenes of personal transformation and natural splendor.

Over the course of her solo career, Björk’s oeuvre has been defined by a refusal to do the same thing twice—her records held together by an inimitable voice and melodic instincts. That history has been a theme for this year’s rollout, with Björk revisiting each record — beginning with Debut — in her new podcast, Sonic Symbolism. Fossora, then, is notable for the way it harkens back as much as it looks forward. Throughout, there are traces of Post’s collagist club influences, Medulla’s a cappela orchestration, Biophilia’s exploratory unfinishedness, and Utopia’s wandering song structures. “Allow,” for one, is a holdover from the Utopia recording sessions. Led by that era’s signature trilling flutes, this ode to Björk’s relationship with electronic producer Arca elicits all the childlike glee of a kids’ TV show theme.

But if one Björk project set the blueprint for Fossora more than any other, it’s 2007’s much-maligned Volta. Yes, that’s the one with the tomato album cover, the one that serves as de facto bottom placement on any ranked list of her music. At the time of release it was undoubtedly a step down from the records that preceded it, but Volta’s vitality, aggression, and restlessness of spirit (as on highlights “Wanderlust” and “Declare Independence”) have now resurfaced in an ecstatic upspring. Then, the disparate collaborators and rejection of conventional pop forms on that Timbaland co-produced effort felt like chaos for chaos’ sake. Now, on Fossora, all of the chaos feels interconnected.

Fossora opens in jarring fashion with lead single “Atopos,” made with Kamisyn of Indonesian duo Gabber Modus Operandi. It’s a bracing introduction, to be sure; dissonant bass clarinets are paired with with gabber beats, a subgenre of Dutch hardcore techno with kick drums that hit hard and hit fast. But listen closer, and the disparate parts begin to coalesce around the gravitational force of Björk’s voice. Even if it isn’t traditionally “pleasant,” the melody she sings is still powerful, a power needed to deliver the central missive of the album as a whole: “If we don’t grow outwards towards love / We’ll implode inwards towards destruction.” As “Atopos” builds to a punishing breakdown, it’s as though Björk is testing her listeners. Are you prepared to meet her where she is? To practice the art of radical connection, even in the face of discomfort?

If you are, there’s plenty of wonder to be found on the other side. “Ovule” showcases the same clarinet sextet from “Atopos” in regal, magisterial form, followed by the a cappella interlude “Mycelia,” which could be the sound of two computer circuits or two colonies of fungi communicating with each other. “Mycelia” is one of the most primal and futuristic compositions Björk has ever produced, and segues into Fossora’s first truly breathtaking moment. Drawing from baroque western choral music, “Sorrowful Soil” is one of two songs dedicated to her late mother, Hildur Rúna Hauksdóttir. There is an Icelandic tradition of melodic biography, and Björk’s entry into the canon astounds with its simplicity of lyrics (the line “Into sorrowful soil / Our roots are dark” is repeated throughout) and instrumentation (little more than bass chords and the voices of the Hamrahlid Choir).

Then it’s time for “Ancestress,” a second ode to Hauksdóttir. Over the course of seven minutes, Björk crafts an epic elegy that begins with the sound of a gong and concludes with bells, strings, and tectonic beats that recall the crushing heartbreak of Vulnicura. Here, she traces her musical lineage further back than ever before, singing “You see with your own eyes / But hear with your mother’s / There’s fear of being absorbed / By the other.” “Ancestress” tells an entire self-contained story, but because of that can feel like an album’s worth of intensity packed into one song. The accompanying music video, too, is a vast depiction of mourning — one user on Twitter described it as “gay star wars basically.” It’s a remarkable achievement, but also illuminates the one flaw that hinders Fossora: sonically and emotionally, it’s an extremely taxing listen.

To bow out here, though, would mean forgoing some of the most stunning marvels hidden away in the album’s subterranean caverns. “Fungal City,” featuring serpentwithfeet, is sprightly and ebullient, perhaps the best fusion of orchestral and club on an album that’s exemplary at blending them. The clarinets and plucked strings here have an almost anthropomorphic quality, as if they’ve been animated to mimic different animals…or other, more unknowable forms of life. Between Vulnicura and the starry-eyed sensuality of Vespertine is “Freefall,” a conflicted love song that ends with a repeated call to “illuminate, illuminate, illuminate.”

Fossora is not an album that can be listened to passively, and Björk has never felt any obligation, nor should she, to resolve her contradictions or narrow her focus. But get on her wavelength — extend your hyphae roots out to touch hers — and she’ll light up your mind.

Bjork’s Fossora is out now, via One Little Independent Records. Listen to the album below, and order vinyl, cassette, or CD editions at Bandcamp.