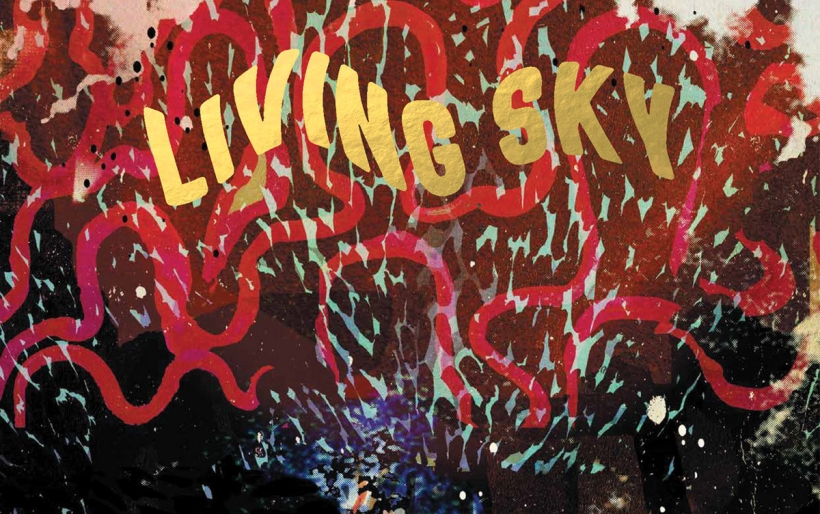 Living Sky is practically overflowing with the power of this long continuum of music that the Sun Ra Arkestra was originally built on 70 years ago.

From 1910 to around 1970, an estimated six million African Americans left the southern states in one of the most significant mass migrations in modern human history. Seeking to build a better life, Black folks in the South were willing to upend their lives in order to escape the horrors of Jim Crow, de facto segregation and an economically exploitative sharecropping system that bore more than a passing resemblance to life on the plantation. Like many Black southerners that during this great migration, Herman S. Blount (aka Sun Ra) brought a rich and old cultural heritage along with him when he made the journey up north.

In his earthly hometown of Birmingham, Alabama, Sun Ra learned the intricate languages of jazz and the blues while playing with touring bands and refining his prodigious piano skills. Mirroring the journey made by many of his fellow Birmingham natives (as well as Black folks from bordering states like Mississippi), Sun Ra moved to Chicago in 1946. Undoubtedly inspired by being in one of the epicenters of 20th Century Black music, Sun Ra’s ear would evolve dramatically in Chicago. In mid to late 40s, Sun Ra played in show bands with blues singers and nightclub entertainers, learned to compose and arrange for large ensembles working under big band legend, Fletcher Henderson and absorbed the revolutionary sound of Bebop while working in small ensembles. It was this mastery of such a wide and diverse breadth of Black musical language that Sun Ra brought into the 1950s and his foundng of the Sun Ra Arkestra in 1952.

Sun Ra has long left the planet, but today, the Arkestra and the tradition that it embodies remains. Currently operating under the leadership of saxophonist and multi-instrumentalist, Marshall Allen, the Arkestra has been continuously active since the 50s and currently exists as one of the great living institutions of American music. Like their previous album, 2020’s Swirling, the Arkestra’s new Living Sky is practically overflowing with the power of this long continuum of music that the band was originally built on 70 years ago. The album opens with “Chopin,” a dramatic and complex tune that acts as both a tribute to the great Polish composer and Sun Ra’s own documented love of Western classical music. Expanding on Chopin’s “Prelude in A Major,” “Chopin” pulls Western classical into the jazz realm with the soulful voicings of the Arkestra’s brass section. “Somebody Else’s Idea” is an old tune from the Arkestra’s repertoire. Here, the tune is played at a slow pace, with rhythmic, melodic and harmonic characteristics all calling back the eastern-flavored lounge / “exotica” craze that was popular in the 1950s and 60s.

From here, the Arkestra really stretches out with “Marshall’s Groove.” Clocking in at a little over 11 minutes, the tune opens with a slow tempo that allows space for a gorgeous, blues-drenched saxophone solo to unfold in front of us. As a chorus of horns enter, they establish a dissonant harmonic framework that add a strangeness to the piece. Similarly, “Firefly” is an epic ten-minute exploration that is as romantic and dreamy as it is avant-garde. When “Firefly’s” groove kicks into high gear, the Arkestra’s swing-era roots shine through revealing their genetic kinship with the big bands that energized ballrooms throughout the country in the 1930s and 40s. The album closes with a delightful version of Leigh Harline and Ned Washnigton’s classic “Wish Upon A Star.” Here, Farid Barron shines on piano as the Arkestra pushes the 1939 pop ballad to its logical breaking point, adding dissonant harmonic and melodic elements that enrich the piece.

Much like Swirling, The Living Sky finds the Arkestra in impressive form. This set of songs and the skilled, intergenerational band performing them, reveal a profound truth about Sun Ra’s musical approach: The Arkestra itself is a tool which Sun Ra used to reckon with and synthesize and untold centuries of musical history and language. The perceived stylistic gulfs between these traditions are inconsequential. Sun Ran not only imparted this understanding upon the players that knew and played with them, he established this understanding as a transferable philosophy that is taught to the Arkestra’s young players. As a result of this, the Arkestra can so freely flow between so-called free and traditional playing while expressing the emotional, social and historical truths that shaped this music. When we listen to the Sun Ra Arkestra play, we are not just listening to music, we are hearing history in motion.

Sun Ra Arkestra’s The Living Sky is out now via Omni Sound; order it in vinyl, CD, or digital editions here, and stream it below.