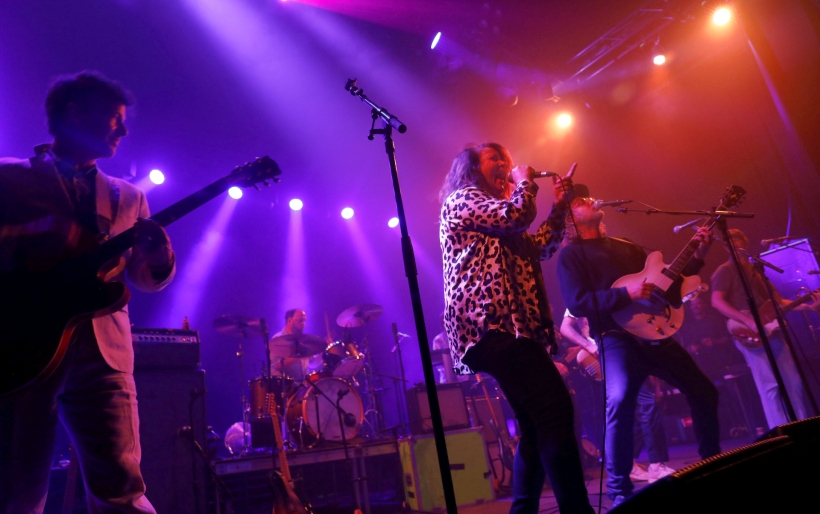 Chaotic Good: Broken Social Scene celebrates 20 years of ‘You Forgot It In People’ at Union Transfer

An anniversary album playback and a catalog deep dive from the Toronto art house icons was unhinged, in a good way, in Philly this week.

A Broken Social Scene concert is always cause for excitement, whether the reason be new music (like five years back when they brought their most recent album Hug of Thunder to town), or the celebration of a momentous milestone, like we got this Wednesday at Union Transfer.

It’s been 20 years since the band released their acclaimed sophomore LP You Forgot It InPeople, an album that — as de facto band leader Kevin Drew told a sold out Philly crowd — changed all their lives, and gave them the ability to take their music on the road and see the world beyond their Toronto art scene home base. It was an album that kickstarted a progression from ambient experimentalists to pop tunesmiths, and even though they never lost that experimental edge, the pop gets more and more refined with each passing project.

It also was the record that saw the explosion of Broken Social Scene from a two-person project to a sprawling multi-member “collective,” something that can be a blessing and a curse. The aughts were a strange time in music, an era of excess where bands took an auxiliary floor tom player on the road just because, and though Broken Social Scene never hit the point of bombast without purpose — truly the sound they create with all the multi-instrumental players and rotating vocalists is profoundly impactful — it is nevertheless bombast, and not always easy to cleanly execute. An eight-member edition of their coterie faced mildly chaotic setbacks throughout their Union Transfer set, from Drew switching up songs on the fly as his voice grew more and more raw over two-plus hours, to a sound tech who kept rushing onstage to fidget with drum mics and synth inputs up to the last song of the main set. Though nothing ever reached the point of full collapse, the threat hovered; at one point there was an inexplicable loud BANG! from offstage and once it was clear nobody was injured, the show moved on. 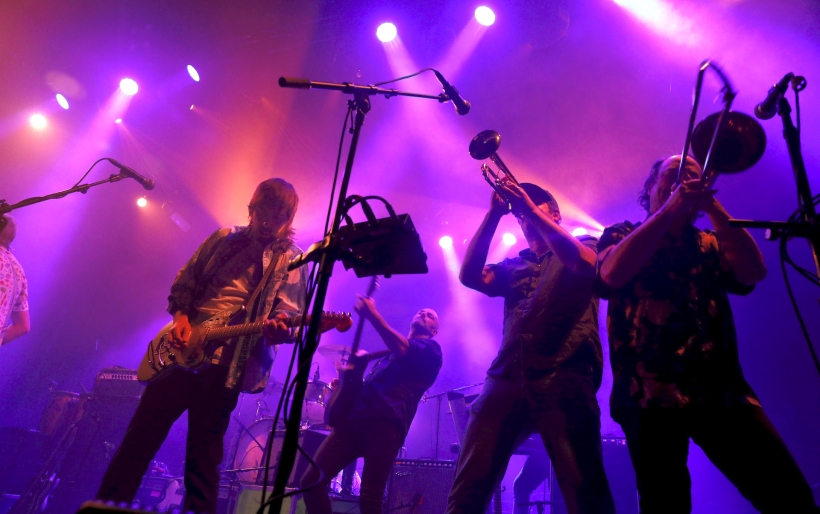 But the moments that were great, were so great. Opening the show with People‘s opening run of songs was a thrill, from the barreling urgency of “KC Accidental” to the handclap-happy crowd participation of “Stars and Sons,” to Amy Millan of the band Stars rushing onstage in a whirlwind to sing “Almost Crimes,” play flute on “Looks Just Like The Sun” and generally contribute to the festivities for the rest of the night. It was the first show of tour where she was able to link up with the band, and she knocked it out of the park.

Beyond Millan, Drew, and co-frontperson (if BSS can be said to have a frontperson) Brendan Canning, the ensemble was rounded out by Charles Spearin of Do Make Say Think on trumpet and guitar; Evan Cranley of Stars on saxophone, guitar, and percussion; Sam Goldberg Jr. on bass and guitar (upwards to five stringed instruments were in in play at once); Loel Campbell of Wintersleep on drums; and Andrew Whiteman of Apostle of Hustle on (you guessed it) guitar. (Whiteman was maybe the only player at the show who stuck to one instrument the entire time.)

The band paused the People playback at the midway point somewhere to work in songs from elsewhere in their catalog: “7/4 (Shoreline)” from their self-titled 2007 LP was set up with Drew waxing rhapsodic about community and family and sending the song out to his mother, who he said is in the hospital; “Fire Eye’d Boy” from that same album was also a standout. Heading into the brooding beauty of “Sweetest Kill” from Forgiveness Rock Record, Drew said fans have used it as their wedding song, something that shocked the hell out of the people who made it, but goes to show you can never predict the context a song might find itself in. It was played in the “love song portion of the show,” a section that also featured that one People selection with the homophobic slur in its title, something I’m not sure has necessarily aged well 20 years later; less provocatively, it also featured Hug ofThunder‘s title track, which slammed in the best way.

It was great hearing cuts from across their catalog in the mix, but the brightest moments of the night did come from People, an album that’s clearly connected deeply with fans. The dense layers of “Shampoo Suicide” bloomed into breathtaking harmonies from everybody with a vocal mic. A showstopping performance of “Lover’s Spit” that began with Drew solo at a keyboard turned into a gorgeous singalong. And the penultimate “Anthems for a Seventeen-Year-Old Girl” — which Millan took lead on, sublimely — was a rare moment of shared experience, of that community Drew spoke lovingly of earlier. A raging and unhinged performance of self-titled’s “Ibi Dreams of Pavement” later and we were sent off in the night, alone and together.

Check out a gallery of photos from the show below, beginning with scenes from Jasmyn‘s opening set. The singer-songwriter and fellow Torontonian first got on WXPN’s radar in the indie rock outfit Weaves — check out their Indie Rock Hit Parade live session here — and her solo music finds her singing, dancing, and rocking indie synth pop bangers.