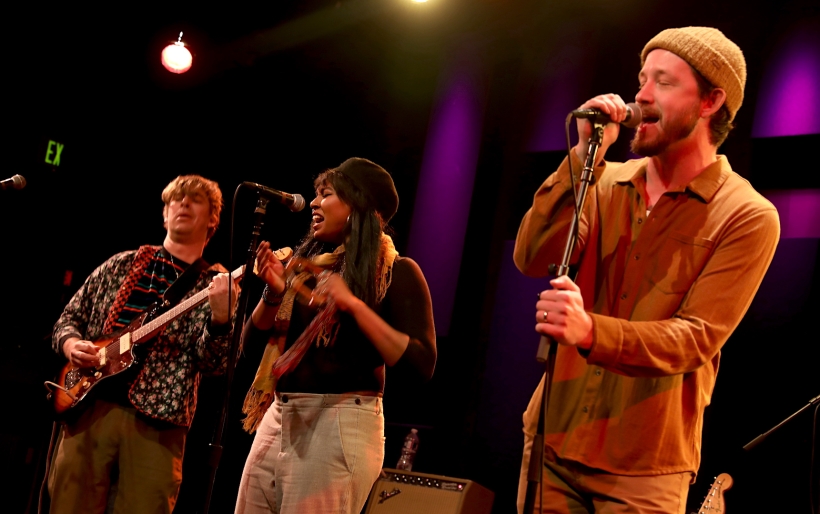 The über-talented Philadelphia outfit wasn’t afraid to leave everything on the stage, and was all the better for it.

Effort looks good on Stereo League. The Philadelphia-based band, led by frontman Alex Savoth and guitarist Dan King, paid a visit to XPN’s Free at Noon hot on the heels of a Philly Music Fest gig and the release of their new EP, Endless Mirage. Today’s set was a collection of immaculate, oldies-indebted rhythm and blues that wasn’t afraid to get a little messy, or wear its heart on its sleeve. After all, as King remarked, “Who says you can’t rock and roll at noon?”

Stereo League was joined by an expanded lineup, including Turquoise Cobb on backing vocals, plus drummer Gusten Rudolph, keyboard player John Hildebrand, and “always on tap” bassist Mitch Beer decked out in white painter’s jumpsuits as a retro touch. All of the musicians were obviously living their best lives—even the stone-faced Rudolph had a glint in his eye. For the Curtis Mayfield homage “Money In Your Mouth,” he laid down an expert groove, striking a balance between keeping the song in the pocket and letting it devolve into an experimental jam session.

As for Hildebrand, Savoth described him as “slurping up all the soup,” which would sound totally ridiculous if it didn’t kind of ring true. The keyboardist was just as likely to add some yacht rock twinkle on opener “Natural Mystery” as he was to throw out a sawtooth synth solo. King’s guitar playing, meanwhile, was all about atmosphere, making things a bit trippier, a bit woozier, a bit more chaotic. On “Summer Night Sounds,” the first song that Stereo League made with local production house Eraserhood Sound, his stormy waves of distortion were like sparks traveling across an electrical field, until a guitar solo that came down like a clap of thunder.

King had his turn at the microphone—on blue-eyed soul number “2 Facin,” with all the collar tugging-that would require—but the day belonged to Savoth’s performance as lead singer. In his songs, he plays the part of a charming scoundrel, crooning “You need someone to love you / But I need someone tonight” on “Miss Me.” His timeless lyrics could be pulled directly from a golden oldies station (“Operator Please,” coming out this November, clearly exists in a world where telephone operators are still a thing).

It might come off as clichéed, if Savoth’s voice didn’t make it so believable. He wasn’t afraid to get himself red in the face for “Seasons of Trouble.” When final song “Whenever You Want It” rolled around, it made sense why the band had saved it for last; Savoth pushed into the upper limits of his range to the point that singing anything else after would’ve been a tough proposition. Then, Stereo League finally let themselves spiral out into one last crescendo of noise, before cutting things off like a candle being blown out: one more magic trick in a show full of them.

Listen to a recording or watch a video of the show below. Stereo League is playing the Sellersville Theater with the Tisburys on January 6th; more information can be found at WXPN’s Concerts and Events page.