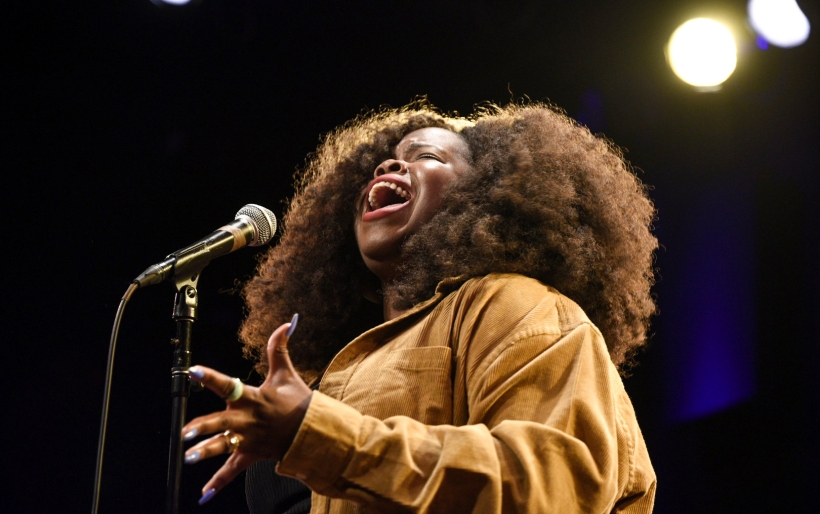 The R&B singer proved that the personal, political and spiritual can all coexist, and that it’s never too late for success.

On December 31st of 2021, Danielle Ponder quit her job. It was five days before the singer’s 40th birthday, and she couldn’t wait any longer to pursue her true passion. “When I’m onstage is the happiest I feel,” she told the crowd at today’s Free at Noon concert, where Ponder delivered profound wisdom alongside her gorgeously rendered soul and R&B.

Ponder’s voice is a chameleon — able to trace a lineage of women through Sharon Jones, Deborah Cox, and even Nina Simone — and she wasted no time making her prodigious talents known. I can’t verify if her voice was church-trained, but there was a hymnal quality to these songs that makes me think it was. After her backing band laid down a carpet of synthetic strings and trilling pianos, Ponder delivered her first sermon: “The darker the berry / The sweeter the juice / The kinkier the hair / The deeper the roots.”

These lyrics were the crown jewel of “Some Of Us Are Brave,” which gives the title to Ponder’s debut record — a collection of downtempo R&B merged with traces of new age and trip-hop. “The Only Way Out” was a dour, downtempo number that capped off with harp arpeggios and a duet between an eerie guitar lead and Ponder’s vocal runs. Meanwhile, the gently ominous chorus of “Fray” spelled looming destruction as waves of guitar and synthesizer rippled and crashed into each other.

In her banter, Ponder was just as likely to give a missive to the audience (“I want you to see if you can be fully present in this moment right now”) as she was to turn her reflections inward, as she did before “Only The Lonely.” “I wrote this song over the course of a few years.” she said, “as a way of confronting all of my mess.” “Only The Lonely” was still a fresh wound for Ponder, and it was equal parts gut-wrenching and transcendent when she had to pause in the middle and catch her breath, or risk getting too emotional to continue.

For “Darker Than Blue,” written at the height of the Black Lives Matter movement in 2020, she turned her gaze to the culture at large to craft a civil rights spiritual for a new generation. But the day’s mood wasn’t all serious; Ponder was actually quite the comedienne. “My therapist said some of the issues in my relationship had to do with me and I was like ‘wait a second: plot twist!,” she said, adding “I couldn’t believe it, so I sued her for defamation.”

Ponder wasn’t afraid to poke fun at her age either: “I used to literally google ‘has anyone made it after 40’ and Google was like ‘Nope!”’ Needless to say, if Danielle Ponder keeps to the path she’s on, that fact may need to be revised pretty soon.

Listen to a recording of the show below. Danielle Ponder released her debut studio album, Some Of Us Are Brave, last month on Future Classic; further updates can be found on her Instagram.