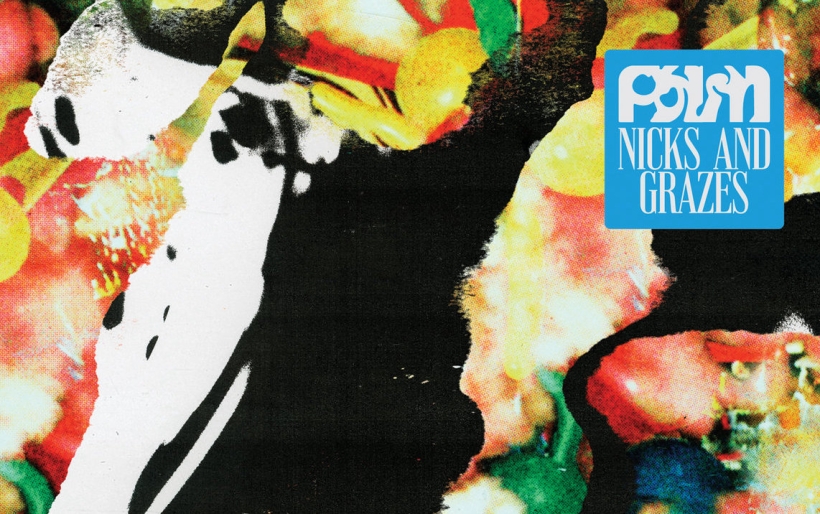 The Philly quartet’s third studio album is endlessly surprising on first listen, but it’s the songs that will keep you coming back.

Now more than ever, the turn to dance music feels like an inevitable part of an indie rock band’s lifespan. Thanks to the marvel of streaming, it’s only a matter of time before your local favorites discover disco or dubstep, pulling faster tempos and funkier grooves into their sound — to variable degrees of success. Credit is due to Palm, then, for making it seem effortless. Their blend of genres is big enough to contain whatever they throw at it, and they’ve thrown everything but the kitchen sink into their third studio album Nicks and Grazes. Harsh noise, math rock, techno, psychedelia, Afro-pop, and a heaping serving of Brian Wilson-isms all coexist in perfect disharmony under the band’s big top tent.

Obvious comparisons out of the way first: Nicks and Grazes sounds a lot like Merriweather Post Pavilion, Animal Collective’s benchmark indie-pop crossover from 2009. Both are adept at balancing infectious melodies and discordant embellishments; both demand contemplation while urging the listener to move their body; both kind of sound like they’re being played at an underwater rave. On “Parable Lickers,” dual vocalists Eve Alpert and Kasra Kurt strike a dead ringer for Panda Bear and Avey Tare’s signature harmonies. This isn’t pure pastiche by any means—even AnCo couldn’t deliver twice on their own winning formula, and 2012’s Centipede Hz disappointed fans won over by the ebullient rallying cries of “My Girls” and “Brother Sport.” Nicks and Grazes, on the other hand, feels like the second coming of the Merriweather successor that never was.

Taken as a whole, Nicks and Grazes is a record displaced from time. Some of these songs could’ve been birthed on the stage at CBGB circa 1977; there are traces throughout of the Brooklyn psych-folk scene, out of which came not only Animal Collective but also Gang Gang Dance (of the forever bangers “MindKilla” and “Glass Jar”). But for all of these Manhattanite points of reference, Palm—the quartet of Alpert and Kurt, plus Gerasimos Livitsanos on bass and drummer Hugo Stanley—are Philly through and through. Their local noisemaker peers include Spirit of the Beehive, as well as Kristine Leschper’s former outfit Mothers, who Palm toured with on the back of their last album, Rock Island.

The line that opens “Glass Jar” is a perfect epithet for Palm’s music: “I can hear everything, It’s everything time.” That’s the guiding philosophy behind both Rock Island and its follow-up, but Nicks and Grazes has the edge of sounding like more by every possible metric. There are noises here that hew closer to a piece of plastic—on opening salvo “Touch and Go”—or metal that one of the members found in a scrapyard and started banging on in the studio. A dubstep beat and jazz drum breaks pile on top of that junkyard steel to lay the foundation for “Feathers” — a name that only makes sense if those feathers are made of steel, raining death by a thousand cuts down upon the listener.

Despite the dissonance, the songs at the core of Nicks and Grazes are quite tender — life affirming, even. Traces of digital detritus and off-kilter rhythms swirl around elliptical, chantlike melodies on “Mirror Mirror” and “Tumbleboy,” the latter of which first appeared on a split release between Kurt and Ada Babar in 2017. Right smack dab in the middle of the record, “On The Sly” pulls one more over on the listener by stripping away almost every embellishment, until what’s left is a (relatively) straightforward math rock jam with an irresistibly warm glow. Listening to Nicks and Grazes for the first time, its ability to surprise pulls you in. “On The Sly” cracks open the shell to reveal the pure, gorgeous songs at the center of the album — they’re what keeps the awe going once the shock has worn off.

Nicks and Grazes by Palm is available now via Saddle Creek Records; listen below.