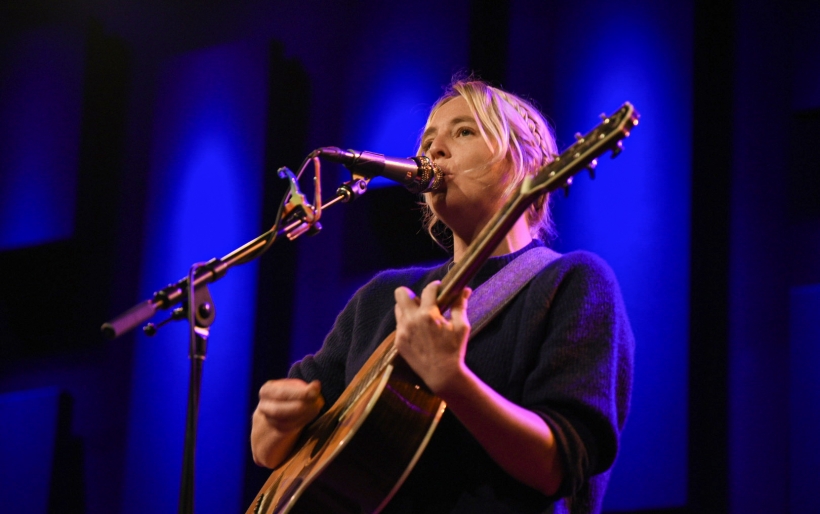 The singer-songwriter’s stripped-down set proved sometimes all you need is a reverb pedal and one heck of a singer.

In classical music, the passaggio is a technical term for when the voice breaks, between the chest voice and the falsetto. Lissie writes songs that are likewise preoccupied with the moments when things break, and she delivers them in a voice that swoops between registers with force and abandon. The singer took the Free at Noon stage just over a month after the release of her new album, Carving Canyons, which is about “the idea that it’s the good and the bad that shapes the landscape of our lives.”

On that album Lissie’s songs are couched in lush arrangements, but her Free at Noon setup was radically sparse — just her and guitarist Pete Sieve, with little more than two reverb pedals between them. If anything, it amplified the power of Lissie’s voice, which snared the crowd from the opening strains of “Unravel” and didn’t let go until the set was over. At the apex of “Chasing the Sun,” as the duo’s strums ratcheted up in intensity, she actually had to back away from the microphone to deliver a roar that could’ve blown out the entire PA system.

Just before the COVID-19 pandemic hit, Lissie left California for a 47-acre farm in Northeast Iowa. “Lonesome Wine” sounded like she was singing unfettered out in nature — addressing the trees, the birds, her dog and the plants in her garden with phrases like “My patience is a page-turner.” Today’s songs bore traces of country, ‘70s singer-songwriters, and even grunge, but none felt overbearing with these limited arrangements. Being safely cradled by such a strong writer meant we could focus on the artistry of her lyrics and the voice she uses to deliver them.

The songs on Carving Canyons were written in the wake of a breakup, and they find Lissie giving voice to feelings that one isn’t supposed to voice at the end of a relationship. On “Flowers,” she was demanding, insistent, and confrontational, crossing  from her head voice to the throaty lows of her range as she lamented that “We’ve been dying for days.” It built to a simple, yet brutally effective chorus of “I’m allowed to hurt / I’m allowed to cry” —  which was echoed later on “Sad” (“I don’t care if you hate me / Or tell all your friends I’m crazy / Cause you don’t like when I get angry”).

As the show began to wind down, Lissie began to unspool her influences more explicitly. “Don’t You Give up on Me,” which she described as “an oldie,” interpolated “Running Up That Hill (A Deal with God),” which is no easy feat (just look at Rita Ora’s lackluster attempt). “Night Moves” channeled Stevie Nicks before one more guitar solo courtesy of Sieve brought things to a close. “I can process things and let them go through music, so hopefully my songs resonate with you as well.” I don’t think I need to tell you that’s exactly what they did.

Listen to a recording of the show and watch videos below. Lissie will be retaking the World Cafe Live stage with her full band this Thursday, November 3rd. More information can be found at WXPN’s Concerts and Events page.