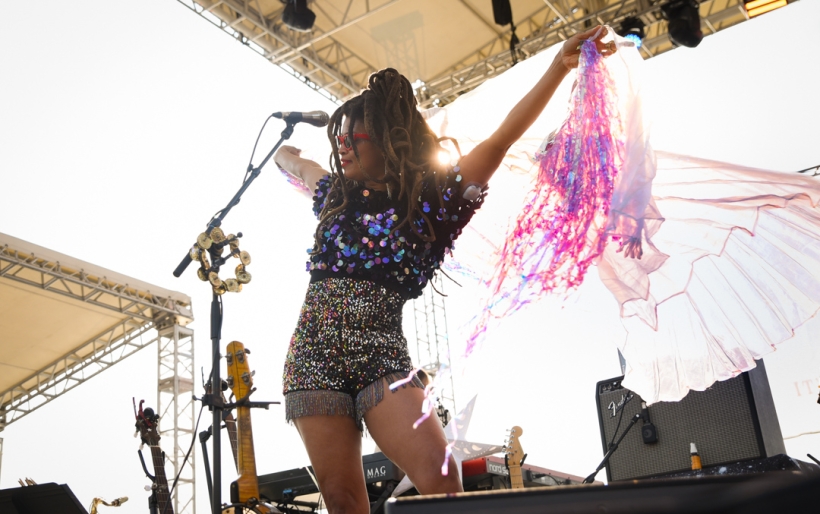 Vote! And then see shows.

Here are 15 concerts to see in the next seven days, all around Philly, beginning tonight just east of New Hope. Tickets and more information can be found at WXPN’s concerts and events page.

Old 97s frontperson Rhett Miller is no stranger to going it alone on the road; he started out as a solo artist, his post-97s solo debut The Instigator just turned 20 years old, he just released his latest TheMisfit, and he can command a crowd with himself, an acoustic guitar, his witty wordplay and charismatic banter. He’ll bring all of that to New Jersey’s Hopewell Theater tonight. // 7 p.m., $30, AA

Speaking of anniversaries, lovable Scottish indie folk outfit Travis is on the road celebrating two-plus decades since the release of its third LP The Invisible Band. Though some might say the melancholic The Man Who… is the band’s more front-to-back solid album, and others might contend that the post-Britpop ebullience of Good Feeling is where it’s at, Invisible Band is a gorgeous record that spawned Travis’s biggest hits (“Sing” was an MTV staple) and dug to cutting emotional depths (“Dear Diary”) while celebrating life and love (“Flowers In The Window”). Ben Ottewell of Gomez opens this solid Monday night show. // 8 p.m., $45, AA

It’s election day! And once you get out there and vote, treat yourself to a concert – and this free gig at World Cafe Live is a fantastic option. The centerpiece is Philly indie rock band Queasy, who recorded a stellar Key Studio Session last week and are in the midst of wrapping up 2022 with a string of gigs in support of their outstanding debut LP Shining Now. Arrive early for the imaginative emospacebird.; stay late for singer-songwriter Julia Pratt. // 8 p.m., FREE, AA

Modern rock trendsetters The 1975 are back this fall with their fifth long-player, Being Funny In A Foreign Language, another collection of shimmering pop tones, dynamic moods, and frontperson Matty Healy’s acerbic and self-effacing lyrical wit. Technically their tour’s local stop in Camden is sold out, but Ticketmaster has a bunch of its “verified resale” offerings for a reasonable price. // 7 p.m., $49.50 and up, AA

At her XPNFest set earlier this year, Valerie June said ​​“a lot of the time the weight of the world is on your shoulders and you don’t know why. So you go down to the river, and start chanting like a magical fairy wizard like this.” She’ll be bringing her spellbinding voice and genre-hopping blend of folk, rock, and soul (much from last year’s The Moon and Stars: Prescriptions for Dreamers) to State College’s State Theatre this Wednesday. // 8 p.m., $46, AA

Valerie June - Call Me A Fool

For over a decade, it’s been known that Cleveland’s Cloud Nothings absolutely kill live. They’re like everyone’s favorite neighborhood garage band, if that band couldn’t stop cramming their songs full of more and more hooks; frontman Dylan Baldi is more than happy to share that bounty with the listener. At Brooklyn Bowl, they’ll be celebrating the 10th anniversary of Attack on Memory, their celebrated Steve Albini-produced sophomore record. // 8 p.m., $25, 21+

It doesn’t seem like Katie Crutchfield is capable of writing a bad song, whether as Waxahatchee or with Jess Williamson in their joint project Plains. The duo’s new record, I Walked With You a Ways, is an ode to the golden age of radio country, and was reviewed by Sean Fennell for XPN. MJ Lenderman also released a fantastic album this year with Boat Songs, so this is one show you definitely want to get to on time. // 8 p.m., $25, AA

Plains - Problem With It

New Orleans seven-piece Preservation Hall Jazz Band aren’t just a band—they’re an institution. The band’s music traces a path from NoLa music’s Afro-Cuban origins to the present day. For 60 years, they’ve brought the sounds of Louisiana’s musical melting pot all across the country, and now they’re visiting the Mayo Performing Arts Center in New Jersey with Pass It On, an anniversary celebration of their extended heritage. For those who live closer to Philly — or who are hype to see Pres Hall twice in one week — they’ll also be at the Kimmel Cultural Campus on Friday. // 7:30 p.m., $29, AA

In early February of 2020, Soccer Mommy became an indie-rock meme in the best way after playing a show to support Bernie Sanders’ Primary campaign. This year, Sophie Allison teamed up with Oneohtrix Point Never’s Daniel Lopatin on Sometimes, Forever, her most fully realized album to date. For anyone seeking out a hefty dose of nostalgia—whether that’s for 90s alt-rock or just a simpler pre-COVID era—check this one out. // 8 p.m., $25, AA

Darlingside - A Light On In The Dark

Sarah Shook and The Disarmers were a standout among the many bands at this year’s XPoNential Music Festival for their fresh take on country-bending nostalgic rock n’ roll. Central PA, we recommend catching Shook and the band at cultural hub Tellus 360, and for those closer to Philadelphia, they’re at Concourse Live just the day after. **note to anyone who bought a ticket when the latter show was at MilkBoy; it’s since moved** // 8 p.m., $18, 21+

Sarah Shook and the Disarmers - Live at XPoNential Music Festival

The Concourse Live is having a renaissance. The Center City nightclub is now proudly featuring rock bands in its programming, and has a staff of industry vets staff behind the scenes thoughtfully putting it all together under the Philly Indie Live umbrella. Come out this Friday night to experience the new venue, complete with a trippy ball pit, and see long-time scenesters Clap Your Hands Say Yeah perform warm new tunes from last year’s terrific NewFragility, a record that finds the band’s trademark freewheeling cosmic pop intercut with emotionally impactful lyrics. Pine Barons opens the show, and you can warm up for it later this week when CYHSY play The Key Studio Sessions on WXPN Local. // 8 p.m., $20, 21+

Playing “The Church” for the first time is a right of passage for up-and-coming local bands, and WXPN favorites and ska stunners Catbite are the latest to reach that milestone. The three-band bill with Bacchae and Take Today is the first on Catbite’s headlining tour, so show the band some love at home before they venture off for the month. // 8:30 p.m., $16, AA

Singer-songwriter Joan Osborne celebrates her tenth studio album Trouble and Strife this Saturday downstairs at World Cafe Live. As “the most political [record] I’ve ever written,” Osborne’s new material offers conscious commentary on some of the craziest changes in society over the last few years. Be prepared for that and 25 years of backlog from the seven-time Grammy nominated artist. // 7:30 p.m., $48, AA

Dreampop torch-bearers for the 2020s, Toronto five-piece Alvvays released a tremendous album this year called Blue Rev, a set of songs rooted in shoegaze-worship and pop songcraft that our Walden Green declared a masterpiece upon its release: “With their novelistic lyrics, deeply-felt production, and decades’ worth of references, the songs on Blue Rev might as well have been around forever. I’m sure they’ll be sticking around for a while.” Alvvays’ North American tour continues this week with the band’s biggest Philly show to date: headlining Franklin Music Hall on a Saturday night, with the tres chic Slow Pulp opening the night.  // 8:30 p.m., $29.50, AA