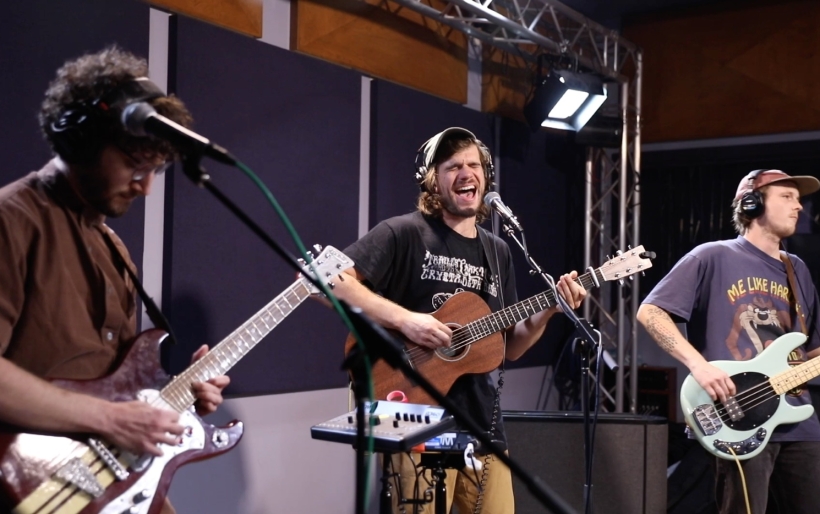 The spirit of the psychedelic folk aughties is alive in Boon.

The Philadelphia four-piece harnesses thrumming drums, wandering melodies, impressionistic lyrics, and dynamic energies reminiscent of Animal Collective, Grizzly Bear, and artists that moved in their orbit. Listening to their music is like watching a painting smeared with bright color and abstract motifs come to life and shift shape before your eyes.

Made up of drummer Dan Lynch, singer-guitarist Brendan Principato, bassist Andy Senken, and guitarist Drew Sher, Boon has been active since 2014, but first hit our radar with Morning’s, a haunting and minimal EP that channeled the collective anxiety and uncertainty of life in May 2020 into meditative, acoustic songs. Two years later, the band reformed in full, and released its third LP, Bad Machine, a towering collection of sound and song that they showcased in WXPN studios for the Key Studio Sessions this week.

The four-song set shows the spectrum of the album’s offerings, from the rush-out-the-gate rocker “Candle” to the pensive explorations of “Gallop,” from the hazy atmospheres of “Figure It Out” to the pointillist pop of the askew “A Shape, A Shell.” Watch the band’s performances below, and pick up your copy of the fresh-off-the-press vinyl edition of Bad Machine here, courtesy of Window Sill Records. To keep tabs on Boon and find out when they’re playing live next, follow them on Instagram at @boon.boon.boon.