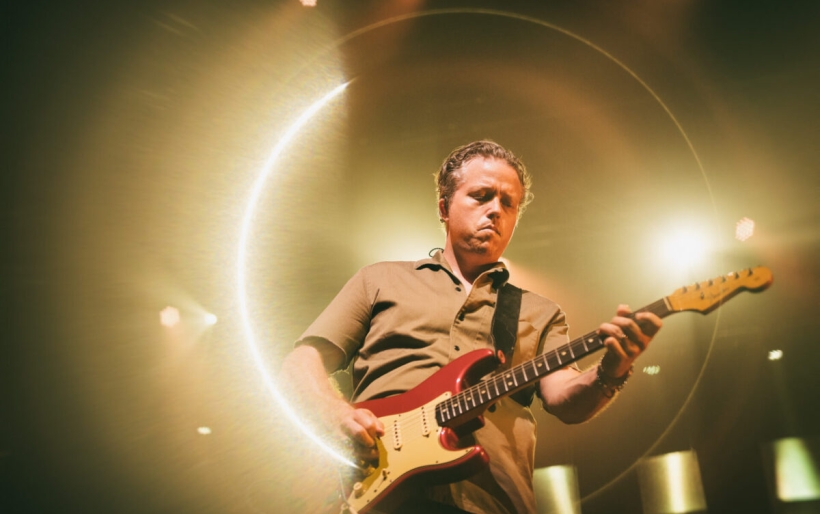 The packed Met was my first (big) show in 18 months, and it was sensory overload on many levels. A physical vaccination card or printed copy was required for entry, and the 3500 who filed into the venue also had a mandatory mask requirement. I had assumed that this hurdle would keep some of the crowd home, but that was not the case.

The triumphant return of Kathleen Edwards kicked off the show. After an 8-year hiatus from music, where she ran a coffee shop in Canada, Edwards sounded great: perhaps better than ever. She opened with “Options Open” from her return release Total Freedom. She thanked XPN for the early and constant support and referred to Philly like her oldest friend, a place she could come back to after many years, and just pick up where she left off. Her set felt nothing like an opener, with full lights and energy and basically a greatest hits show pulling from all five of her albums. “Six O’Clock News” from her debut Failer was a highlight, as was her spirited cover of Supertramp’s “The Logical Song,” which has taken on a new meaning in the current state of affairs. Edwards and her band sounded sensational.

Having seen Jason Isbell close to 10 times over the years, I was not expecting to be surprised. He and the 400 Unit are always solid, with so many classics to pull from, dating all the way back to his run with the Drive By Truckers. First off, there was no Amanda Shires (his wife and the band’s fiddle player), who was recovering (very well) from a medical procedure. Isbell thanked the crowd for “going the extra steps for coming to the show, in a way that we could all be safe and still enjoy ourselves.” He commented further on the importance of live music which, after 18 months, I think I had personally started to lose my sense of.

But the music, and this band, found an entirely different level last night. It was 20+ songs and well over two hours. It was quiet and stunning (“Elephant,” “When We Were Vampires”) and downright bombastic, as in the thunderous version of “Cover Me Up” which had drummer Chad Gamble causing heart palpitations in the crowd with his pounding performance. There were surprise covers — REM’s “Driver 8” from an album of Georgia-artists covers that Isbell will release next month, and a searing cover of the Stones’ “Sway” that closed out the encore. There was a “hillybilly version” of the early Isbell classic “Tour of Duty” which basically re-invented the song, with just Isbell and guitarist Sadler Vaden alone and picking away at the front of the stage “like the Smothers Brothers.”

It was an incredible dynamic range of music and emotion. Classics like “24 Frames” and the always-raucous “Super 8” keeping the energy flowing, and a version of “Stockholm” that in my opinion surpassed the original. It was a little bit up everything, performed with excellence.

Two artists, perhaps at their peak, playing their hearts and asses off to a full crowd. It’s nice to feel things like this again.