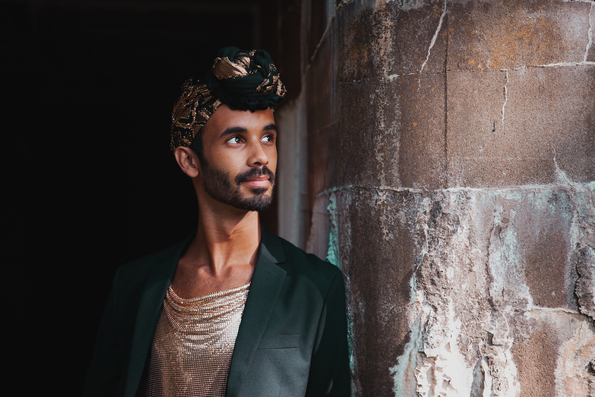 The acclaimed folk singer’s latest, The New Faith, distills lessons from Black spirituals and reclassifies them for a modern audience.

American roots musician Jake Blount is following 2020’s Spider Tales, his debut LP and product of extensive research into Black and Indigenous mountain music, with something even more ambitious. Due out September 23rd, the anticipated new album The New Faith is an Afrofuturist concept record about a dystopian world, and will be released as part of Smithsonian Folkways’ African American Legacy series.

The New Faith is largely composed of reinterpreted Black spirituals, with two original spoken word pieces. Composed at home during lockdown shortly after the murder of George Floyd, The New Faith explores spirituality, Black history, the artist’s own queerness, and the destruction of Earth due to climate change. The record’s first single, “Didn’t It Rain,” which has been sung by Sister Rosetta Tharpe and Mahalia Jackson — and was recorded by Philly’s emospacebird. for a Black Music City project last year — is recontextualized by Blount for today’s world.

“The end result is an album comprised of songs and sounds heard in traditional African and African American ceremony, but updated with modern techniques,” says Blount in a press statement. “The unique history of African American people made our musical tradition an ideal candidate for my ambitious task. The New Faith is a statement of reverence for our devastating, yet empowering past; of anticipation and anxiety toward our uncertain future; and of hope that, come what may, something of us will yet survive.”

Listen to “Didn’t It Rain” at the link below. The New Faith comes out in full on September 23rd. Jake Blount will be in Philadelphia to play World Cafe Live on October 14th. Tickets are available at WXPN’s Concerts and Events page; for more, listen to Blount’s interview with the WXPN Folk Show’s Ian Zolitor here.